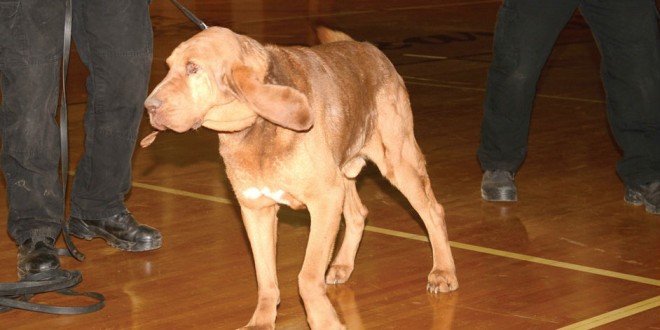 This bloodhound, Copper, is a member of the K-9 unit on the Codington County Search and Rescue Team.

The Codington County Search and Rescue Team, based in Watertown, is the only team within five states who has a K-9 unit. They were in Webster May 6 to talk to local Kiwanis members about what they do.

Of the 33 volunteers currently on the team – with a dive and water rescue squad, ground search capabilities, hazardous material response capabilities and horse unit – three are K-9 handlers. They have bloodhounds and cadaver dogs. The bloodhounds are bred to track live humans whereas a cadaver dog is trained to detect dead humans.

All the dogs and handlers on the Codington County Search and Rescue K-9 Unit are state certified with the Department of Criminal Investigation.

Terry Sorensen and Dave Scheafer brought three dogs with them to show and use to explain how they do their job.

The first they showed was Goldie, Sorensen’s senior cadaver dog. She is a 12-year-old Drahthaar, a type of dog bred only in Germany that is not recognized by the American Kennel Club. They are related to a German Pointer.

The guys explained that the hardest part about training a cadaver dog is getting hold of the proper material to train them with. It’s not like they can use synthetic human remains.

“They have to be trained how to detect fresh death all the way through the stages of decay to old bones,” Sorensen said.

They rely heavily on donations of body parts, he added.

Next, they brought in Copper, a purebred bloodhound male who has been tracking for about five years.

“This dog is made for tracking humans,” Scheafer said.

He explained that a bloodhound is scent selective.

“As he was walking in here, he was picking up all these smells and filing them away in a memory bank,” Sorensen explained.

Scheafer said that a bloodhound’s testimony is accepted in a court of law 100 percent of the time.

“His trail is his testimony,” Scheafer said.

It is for that reason that the K-9 handlers take such painstaking steps to document everything while on a trail.

Lastly, they brought in Jury, a five-month-old female Drahthaar pup who is in training to become a cadaver dog.

While Sorensen says he has been working with Jury on his own, she is about to be enrolled in a year-long training program to become a full-fledged cadaver dog. At this point, she still has a lot of puppy in her system, he commented.

“Believe me, she is really excited to be here today,” Sorensen joked with the audience.

He has been a volunteer K-9 handler for 14 years.

Schaefer has been a volunteer K-9 handler for 10 years.

To become a K-9 handler is “a huge commitment,” Sorensen said.

The dogs will live with the handler and go with them wherever they go all the time.

“It’s a matter of becoming a partner with them,” he said.

Also, Sorensen and Schaefer are gone from home almost one-third of the year.

“If there is a homicide, you can count on being gone a very long time,” Sorensen said.

The Codington County Search and Rescue team has a contract with Day County, so if they have to come do any work in the area, it is at no cost. All those on the team are volunteers and funds are raised through fund raisers.