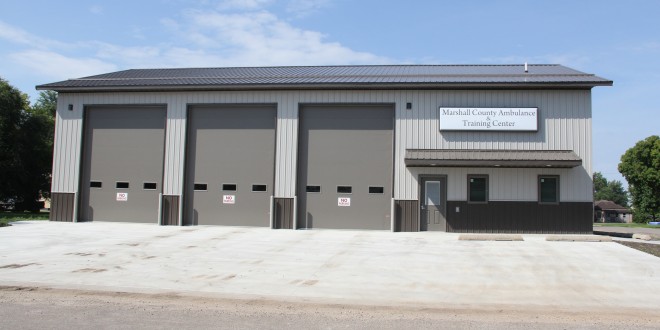 The third in a series.

The unofficial Marine slogan made popular by Clint Eastwood’s movie Heartbreak Ridge could just as easily serve as a motto for many rural emergency medical services in the Dakotas today. Despite the challenge of finding enough volunteers—or in some cases, because of that challenge—many departments have come up with creative ways to serve their communities better. Not all strategies have been tried yet, and not all have worked, but each one could be viewed as another step in learning how to create a sustainable solution.

Unfortunately, innovating their way out of the crisis might require more time than many of these rural services have.

Here’s an overview of a few of those ideas.

Strategy 1: Allow EMTs to get part of their training online.

One of the challenges in recruiting new emergency medical technicians is the time required for training: about 150 hours in North Dakota and 160 to 180 hours in South Dakota.

“In Faulkton … anyone who wants to be an EMT on our ambulance service has to go to, say, Aberdeen for his or her training,” explained Tom Hericks, director of the Faulk County Ambulance, in a Dakotafire story from October 2012. “They hold classes every Tuesday and Wednesday night from 6 to 10 p.m. Well, for anyone from our area, that class is actually from about 5 to 11 p.m., since we have two hours of driving time to tack on. You can only miss, say, two classes or so, or you fail. That’s one heck of a commitment in time and monetary resources for only being paid $1.55 per hour to be on call for an emergency. That’s just not realistic.”

The solution that Hericks proposed was allowing prospective EMTs to take part of their training online. And, after receiving approval from the board of the South Dakota Emergency Medical Technicians Association (SDEMTA), he was able to put such an online class in place.

“It was a great help to our local ambulance for a short time,” Hericks said last week. “We started with three in the first online class, but since that time one dropped out of the class early without completing it for personal reasons, and the other two that graduated and became Basic EMTs have moved away. So we are very short staffed again, and I am very uncertain of Faulk County Ambulance’s survival at this point. I am not sure how long that we will be able to maintain a viable ambulance service.”

The Frederick (S.D.) Ambulance Service had to give up its ambulance license in January because it could no longer guarantee 24/7 response with two EMTs. But Cole Adema, director of the Frederick Area First Responders (as they are now called), would like this to be just a temporary setback on the way toward providing a higher level of care for the community.

One way to guarantee coverage is to pay at least one, perhaps two, people to serve the community during regular working hours when volunteer help is hard to find. Since Frederick’s 911 call volume would not warrant a paid position by itself, that person could provide other forms of health care that would prevent future emergency needs—helping people who have just come home from the hospital, for example, or checking that the elderly are doing OK in their homes.

“This community paramedicine model has been shown to work in other countries and other states,” Adema said. “It requires, however, a lot of time (perhaps two years), paperwork and organization to implement.”

The first responders consulted with an attorney, who suggested that creating a taxing district for fire service would be a better first step than seeking a taxing district combining fire and ambulance. That vote will be on a ballot for the community to decide on this fall.

The Marshall County (S.D.) Ambulance Service was in need of a new building to house all three ambulances as well as provide a meeting room and training space for EMTs. The plans were drawn up which included all those needs plus two bedrooms and a laundry so the on-call EMTs had a place to stay and an office for doing ongoing paperwork. A fundraising campaign kicked off to raise the additional money needed for the $500,000 project. To everyone’s delight, more than $500,000 was raised and the new building is a reality, along with a new ambulance.

Ambulance Committee member Josh Kraft stressed that the project is much more than just a place to house the ambulance service.

“It’s important to understand the entire issue,” Kraft said. “As an outside person whose family has used the service several times, I see the dedication of our EMTs. They are far more than just volunteers, and my goal is to make a building that will benefit them, not to mention the pride in the community. It’s one of those things I think we need to rally around. Our hope is that if we build it, some (EMTs) will come.”

Attracting additional EMTs is really what’s needed to keep the service operating well into the future.

“We are in jeopardy of losing the ambulance service because we don’t have the people,” stressed County Commissioner Myles DeVine. “EMTs have to live within a few miles of Britton because of the needed response time, so we’re hoping that this new building will help take care of some of that by providing overnight accommodations. We’ve had people from Langford or Veblen that have said they would be happy to do it if they had a place to stay.” 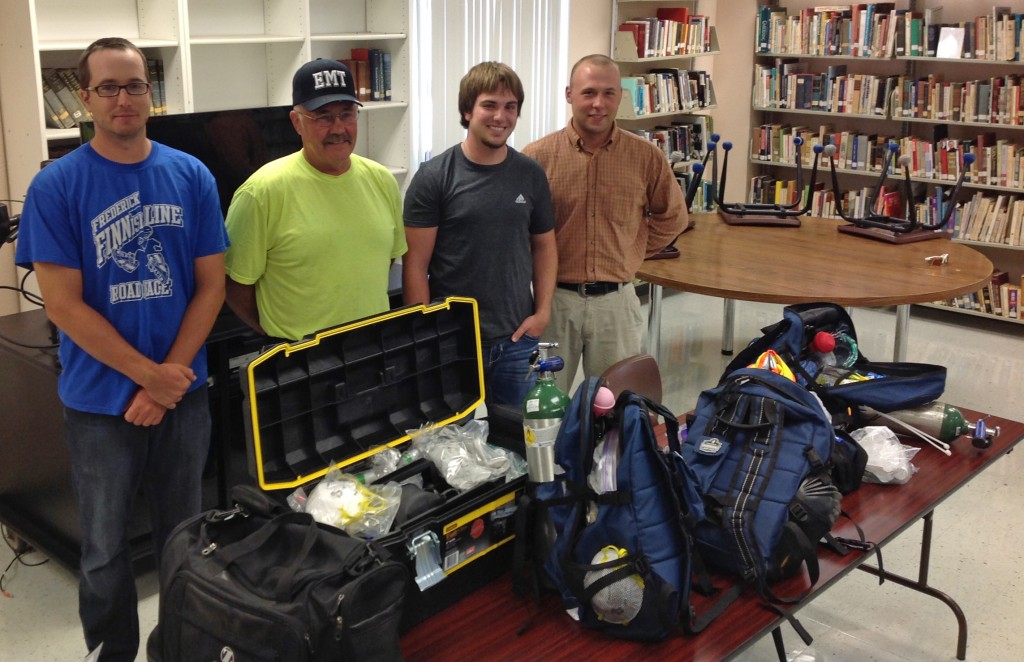 Members of the Frederick Area First Responders show off their “ambulance in a bag” kits. From left are David Losure, Rick Adema, Austin Hoerner and Cole Adema. Photo by Heidi Marttila-Losure

Strategy 4: Help rural EMTs respond more quickly with an ‘ambulance in a bag.’

In Marshall County, the new building will help paramedics and EMTs can provide the fastest service by giving them the accommodations they need to wait near the ambulance. In other rural areas that covers many miles, where the limited number of volunteers have other jobs, waiting near the ambulance is not the best option.

All of Frederick’s EMTs now have what amounts to an “ambulance in a bag”—all the things they need to start treatment as soon as they arrive on scene. This means they can either go to the station and bring the ambulance, or drive straight to the scene—whichever ensures the fastest response. Most of the EMTs carry the bags in their vehicles so they can just hop into their vehicles and go.

The Frederick Area First Responders put together the bags without outside funding. They bought many of the supplies by working with Sanford, and so were able to buy many of the items at cost.

“About the only thing we don’t have in here is a backboard,” Adema said.

Adema added that other departments in the state are considering putting together their own similar kits, and he’s offered to share his supply list with them.

Years ago, when emergency medical services started, classes for EMTs took just 22 hours, but at the end of the class, EMTs could only use oxygen and take a patient’s blood pressure, explained Marilyn Rutz, director of Emergency Medical Services in the South Dakota Department of Public Safety. Now, classes take 160 to 180 hours, but EMTs know how to do much more. “EMS education & training is designed to give the best patient care possible,” Rutz said.

Some rural EMTs have suggested, however, that something is better than nothing, arguing that perhaps regulations for EMTs in very rural areas need to be relaxed in some way, with less training required or looser rules about what training level is required of those who respond. Ambulance services are already granted hardship exemptions if they can guarantee that they can respond with one EMT and a trained driver, but those exemptions are temporary.

Hecla, S.D., had to give up its ambulance license in July and became a first responder unit. Hecla’s mayor, Jay Osterloh, says the restrictions on what first responders can do could result in a life-or-death situation for patients.

“The first responder program was designed so that someone could drive to the scene in their own car and give help until the ambulance arrived,” Osterloh said. “Now we have first responders with ambulances that just have to sit. There has to be something in between, and I think the rules have to change.”

The rules for the training required for EMTs is based on national standards but actually written into state statute, according to Rutz. State legislatures could decide to make different rules to respond to the needs of rural communities with EMT shortages.

For example, one option available in North Dakota is the use of substations, in which a community ambulance works under a headquarters ambulance service. These community ambulances are permitted to transport patients, but they do not have to be available 24/7, according to Tom Nehring, director of EMS and Trauma for the N.D. Department of Health.

A legislative solution will likely require a clear vision and united voices. Finding examples to explain the gravity of the problem will be the easy part.

“It’s important for people to understand that this is a need,” said Kraft, of the Marshall County ambulance.  “It’s not something we’re doing just to have, and it’s not just a Britton problem but a regional problem. It will affect everybody sometime in some way—guaranteed.”

See the first two stories in the series here and here.

What do you think should be done about the EMT shortage? Add your comments to the conversation: Go to www.forum.dakotafire.net.