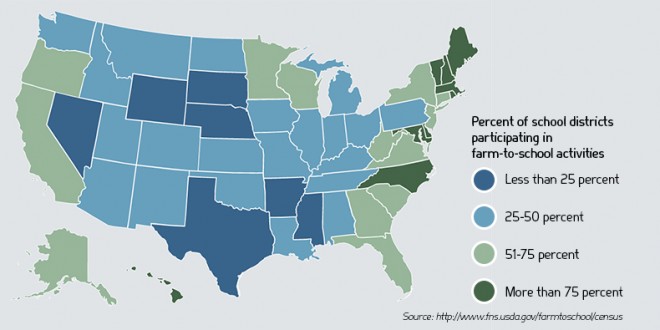 (NPN) – Though one of the most agriculture-dependent states in the nation, South Dakota is among a group of states that have the lowest percentage of schools participating in farm-to-school activities, according a new USDA report.

Twenty-four percent of South Dakota school districts that reported to the USDA said they had some sort of farm-to-school activity. Only six schools or 2 percent of the reporting schools said they had a school garden.

In North Dakota, 40 percent of schools said they had a farm to school program, and 9 percent (13 schools) had edible gardens.

Both states were short of the national rate: 43 percent of responding school districts nationwide said they had such a program.

USDA says when students have experiences such as tending a school garden or visiting a farm they are more likely to make healthy choices in the cafeteria. Further, the USDA notes, when schools invest their food dollars in locally, all of agriculture benefits, including local farmers, ranchers, fishermen, food processors and manufacturers.

USDA released results from a nationwide Census of farm to school activities Tuesday.

The USDA also found that 13 percent of school districts surveyed nationally are committed to launching a farm to school program in the near future. With purchasing local food as a primary farm to school activity, in school year 2011-2012, schools purchased and served over $350 million in local food.

In South Dakota, according to the USDA census, school districts spent $137,419 last year on locally produced food. Fruits led at 16 percent of local spending following by vegetables at 14 percent.

In North Dakota, school district spending on locally produced food was $229,875, with 26 percent of local money spent on vegetables and 20 percent spent on fruit. The top items purchased were cucumbers, tomatoes, apples, potatoes and corn.

USDA will accept additional submissions to the USDA Farm to School Census through Nov. 30.