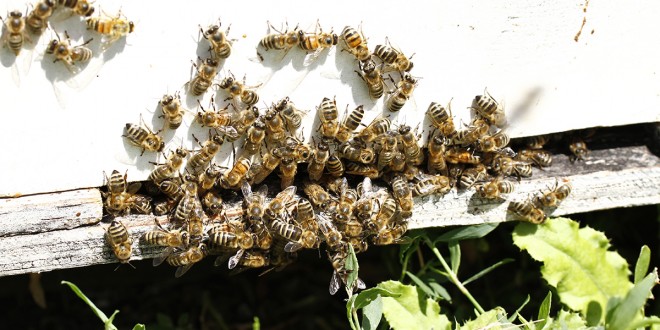 Bees in a hive at Miller Honey Farm in Gackle, N.D. Photo by Melody Owen/Tri-County News

Editor’s note: This is the first in a two-part series about Dakota beekeepers and the mysterious problem of colony collapse disorder. 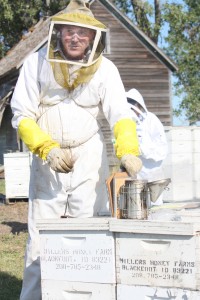 The beekeepers in the Dakotas could be called the states’ largest livestock producers, since their “herds” number in the millions.

But they could also be described as the states’ largest employers: Bees that spend their summer in the Dakotas spend much of the rest of the year scattered across the country, from California to Maine, doing the work of agricultural industries worth billions of dollars.

Since 2005, however, beekeepers have watched their industrious workers die off in record numbers, a problem generally called colony collapse disorder.

A 5 to 10 percent loss in hive numbers is normal over the winter. John Miller of Miller Honey in Gackle, N.D., said their losses have averaged 30 percent over the last five years—a percentage he calls unsustainable. Richard Adee, owner of Adee Honey Farms, the nation’s largest honey producer based in Bruce, S.D., said this year their losses were 55 percent.

“If we don’t find the cause of colony collapse in the next two or three years, this industry is about to go out of business,” Adee said in a July KDLT News story.

This is the time of year when many Dakota bees hit the road.

In late August through late September, according to Adee Honey Farms employee Dennis Dyke of Kimball, S.D., Adee’s bee hives in from are loaded onto a flatbed truck and covered with a special net to keep them in place for the long drive. They’ll end up in Bakersfield, Calif., where they will rest and relax for a few months, sipping a sugar solution to gain strength.

Bees belonging to Gary Block of Waubay, S.D., spend their R&R time in Arkansas or Texas. Miller Honey bees rest up in southern Idaho. But they will all end up in the Bakersfield area by January, when they start their most demanding work of the year: Carrying pollen from one flower to another in a process that is vital to the $3.87 billion almond industry.

All of the nation’s almonds are grown in that one area, and business is booming—the number of acres planted to almonds has increased every year since 1995, to an estimated 810,000 acres in 2013, according to the California Department of Agriculture. And even that isn’t enough to meet demand, according to the Almond Board of California.

The more that consumers want almonds, the more the almond producers need bees. That one crop now requires the services of a third of all the honeybees in the United States.

Those bees are getting harder to come by since colony collapse disorder started taking its toll in 2005. Almond producers are paying significantly more than they did in the 1990s to ensure that they will have enough pollinators.

Almonds are by far the crop that needs the most bees, but many other crops also need bees to do their pollinating. From Bakersfield, the Miller Honey bees work in California cherry and apple orchards, then in spring flower gardens. Block’s bees (his business is called G-Bees) have traveled to Maine to pollinate wild blueberries, or sometimes to cranberry bogs in Wisconsin. Adee bees go to Texas or Mississippi to pollinate trees. 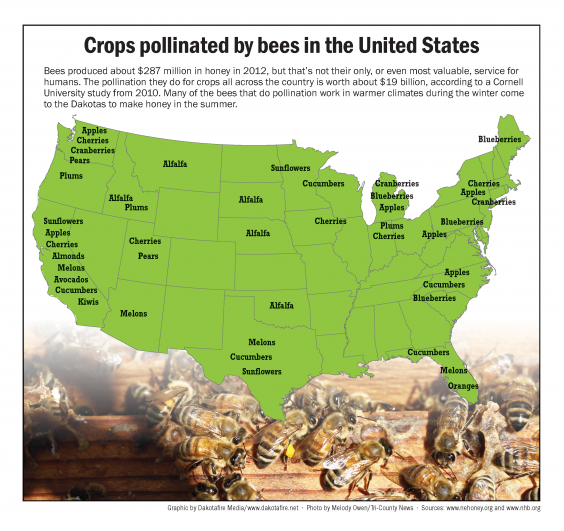 INFOGRAPHIC: Crops pollinated by bees in the United States

Home gardeners, too, benefit from bees to pollinate their watermelon, tomatoes, squash and much more. The commonly quoted statement that one of every three bites of food we eat relies on bees is an exaggeration, according to Keith Delaplane, an entomology professor at the University of Georgia, who says the real number is more like 7 or 8 percent, but that percentage is arguably some of the tastiest food we have.

Including, of course, honey. A significant share of those hardworking bees spends the summer in North and South Dakota, where they make a lot of the sweet stuff. The Dakotas were the top two states in honey production in 2012, with more than 50 million pounds produced between the two states.

Miller Honey was organized in 1894 by N.E. Miller, near the little town of Providence, Utah. His great-grandson, John Miller of Gackle, is the present owner; John’s son, Jason, is also in the business, and Jason’s son, Ollie, represents the sixth generation. Ollie is just 5 years old, but he’s already “been in the bees.”

John said he never had any doubt he would keep bees. He enjoys explaining how the hive works:

“A hive of bees is a super-organism, consisting of tens of thousands of individuals,” he said. “Certain tasks are performed at different stages of an individual bee’s life. A baby bee can’t fly. She cleans the hive and feeds her unborn sisters until she is old enough to fly. The pollen jockeys are older, smarter bees. They rely on scouts, who each morning alight from the hive early to seek nectar and pollen sources.”

Miller Honey is one of about 200 licensed beekeepers in the state of North Dakota. Of those, about two-thirds have North Dakota addresses. The rest bring their hives to sites in North Dakota for the summer. 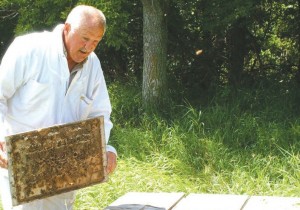 Gary Block of Waubay is a travel agent for bees that travel across the country pollinating crops. Photo by George Thompson, Reporter and Farmer

Block, owner of G-Bees in Waubay, is one of the 214 licensed beekeepers in South Dakota. He said he started working with bees in the mid 1970s, when an employee of his talked up bees enough during the workday that Block decided to get a hive of his own.

“When I went into the business, the real money was in the pollination, not the honey,” Block said. “Nowadays the price of honey is a lot higher than it was, and you can make money there too. We do both now.”

He had a large commercial operation but eventually sold those bees. He was drawn back into the bee business three years ago, when he purchased some bees from his brother, and now does business on a smaller scale.

Dennis Dyke said he applied for his job with Adee Honey right out of high school and has worked with bees ever since. Adee is the largest beekeeper in the world, managing 80,000 to 100,000 hives.

Of these three beekeepers, Block is the most optimistic about the future.

“The industry is really opening up now that there’s better money in it,” Block said, noting that the demand for commercial pollinators continues increase. “Honey is really becoming a byproduct.”

Dyke sees some problems ahead. Young people are not really interested with the bee business, he said. Miller said he has had to hire workers from Mexico for the summer season because he has such a hard time finding help.

Honey production is down this season in the Dakotas, though final reports aren’t in yet. Miller predicts the crop will be terrible in North Dakota and nationally. Some such variability is to be expected in any industry dependent on the weather, but with increased bee die-offs, the loss of revenue adds another strain for beekeepers. Beekeepers will feed more calories to their bees in 2013 than they harvest, as they did in 2012 and 2011, Miller said.

And all of the beekeepers noted that the industry is on shaky ground if they can’t find a solution for colony collapse disorder.

Miller said he worries very much about CCD. He’s given of his time to many industry groups working on the problem.

“Yes, I worry,” Miller said. “I worry for my son’s success and for the 20 families that depend on me for a paycheck, and the government. If you don’t also worry, I worry for you, too.”

See the second part of this story posted later this week: Researchers have found one of the causes of bee die-offs rooted in the Dakota countryside.