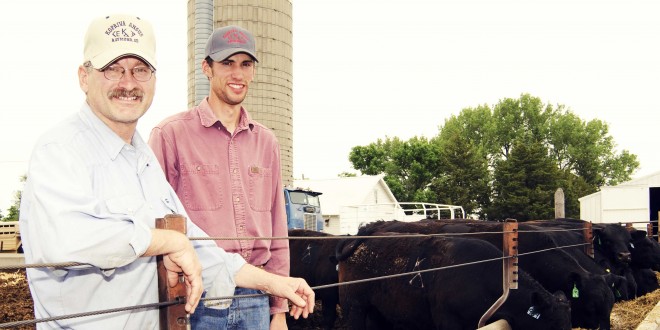 Jim Kopriva and his son, Lee, on their farm near Raymond, S.D., where they raise registered and commercial Angus cattle. Photos by Troy McQuillen

Jim Kopriva and his son, Lee, on their farm near Raymond, S.D., where they raise registered and commercial Angus cattle. Photos by Troy McQuillen 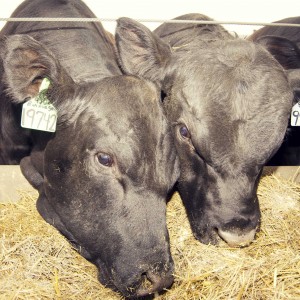 The Koprivas have a bull sale every May. Learn more about their cattle and operation at www.itctel.com/koprivaangus/.

At lunchtime most days, Jim Kopriva and his 25-year-old son, Lee, come in after the morning’s work is done on their farm near Raymond and put together a meal, either from leftovers or with some fast cooking. They say grace and eat together, do the dishes (Jim’s wife, Karen, who works off the farm, has trained them well on that), take a little rest and then hit it hard until supper.

The partnership works well for them.

“Two guys working together can get more done than three guys by themselves,” Jim said.

The Koprivas raise registered and commercial Angus cattle on about 1,200 acres of native grassland, seeded pastures and hayland. Jim and Lee each have their own operations but share labor and equipment, which lowers costs for both of them. The arrangement also gives them a level of freedom that is tough to come by when working with livestock.

“Livestock ties you down, and you can’t leave,” Jim says. “You can’t really be gone for a week, even if there isn’t any work to do. You have to make sure the gates are up, that water is adequate. With Lee home I can be gone for a week or two. He doesn’t need to call me and ask me what to do. And the same goes for Lee (if he wants to travel).”

If livestock places some limits on their lives, it also gives them an opportunity that crop farming does not. Compared with investing a tractor, which declines in value every year, an investment in a cattle herd can gain in value over the years—particularly how the Koprivas do it, by intentionally improving their cattle’s genetics year over year. By retaining ownership of their steers throughout their lives and keeping track of many statistics of their cattle when they are processed, they are able to relay that information to their customers.

“We try to capture the money for improving the genetics,” Lee explained. “We get a premium for the products we are producing.”

The Koprivas also focus on managing their land well, and that work in conservation was recently recognized with the Leopold Conservation Award, given by the South Dakota Cattlemen’s Association, South Dakota Grassland Coalition and the Wisconsin-based Sand County Foundation.

“The Koprivas have made conservation a family tradition, and their grassland, water and wildlife habitat management techniques are a clear demonstration that responsible environmental management and successful agricultural operations can readily co-exist,” Gov. Dennis Daugaard wrote in an article published in the Cattleman’s Weekly magazine.

One of the management practices that earned them this honor was rotational grazing, which they have done since 1984. Jim explained that with good management, grazing can actually make the pasture better.

“You can improve it by using it,” Jim said. “With grazing, the trample action renovates the sod. You get them thick enough in there and they’ll reseed it.”

Another tool the Koprivas use is fire, which can help with weed management. “You can do things to grass with fire that you can’t do with chemicals or fertilizer,” Jim said.

Whenever they make a decision, they try to take other factors besides profit, such as the community’s needs, into account. For example, they strategically leave a strip of native grass near township roads unmowed or ungrazed in the fall so that it can catch snow in the pasture or hayfield, where it can do some good, and keep it off township roads, where it requires much effort and a great deal of money to remove.

Since the first snow generally falls before the ground is frozen, the ground under that snow-insulated native grass strip does not freeze, and so in the spring when the snow starts to melt, the ground can absorb the moisture. Where the snow melts on frozen ground it is more likely to run off and cause flooding elsewhere—and preventing this flooding provides another benefit to the community from this one relatively simple management practice.

Jim has seen the way changes in agriculture have affected their own township. He can recount the story, told to him by the men who grew up here a generation before him, of a time when a carriage left from their farmyard and picked up 13 children on the way to school in town. “It’s been a long time since there were any kids between here and town,” Jim said, although he’s pleased to report that situation has just changed, as Lee’s first cousin moved in nearby with his three children.

The big farm operators can have a much smaller profit margin per acre because they are working with so many more acres, which makes it much harder for smaller-scale farmers, who need a higher cost per acre, to compete for land.

Jim knows how difficult it can be for a young person to get started in farming in this environment. Lee was fortunate to be able to find some additional pasture land when he came back to the farm, but not all landlords are willing—or perhaps able—to make concessions for the sake of having a local renter. Instead, some rent to what Jim calls a “foreign interest”—referring not to someone from out of the country, but someone out of the township.

“We have people from 250 miles away coming up here for pasture,” Lee said.

These “foreign interests” will not be around to help clear the roads in the winter, and they won’t be nearby if an elderly neighbor falls and needs help, Jim said. They also may not care for the land as well simply because they don’t have to look at it.

“If you are living on (the land), and you are feeling shameful about something out there, eventually you are going to go pick up that rock because you are tired of looking at it,” Jim said. “If you go home to Sioux Falls, you’re not going to see that rock until next year. You’re not going to fix that fence. You’re not going to graze it moderately or improve it or spray the weeds, because after all, you are paying extreme top dollar for it. You have ‘the right to abuse it.’ I think that’s their feeling. They’ll pay quite a little more, and they’ll take more than the land can give, because they know when they are done with it they’ll go rent somewhere else.”

At a time when many acres are being converted from pasture to cropland, Jim is happy when he sees that livestock is still in the picture for an operation.

One reason for this is that “livestock means young people,” Jim said, explaining that row-crop farming has become much less physically demanding, but that raising livestock still requires strength and stamina.

For his part, Lee is happy to be working with cattle. From the time he was 4 he knew this was what he wanted to do, and by the time he graduated from South Dakota State University in 2009, he had his own cattle herd. Having a connection with livestock is part of the reason he enjoys his work.

With that connection to livestock and the land, Lee is now the fifth generation of his family involved in farming. As he looks to the future, he hopes to be able to pass on the tradition to another generation.