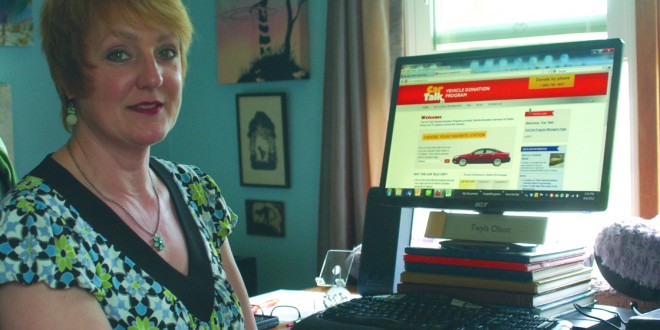 The chance to move closer to her parents and get back to a small-town atmosphere drew Twyla Olson, Car Talk’s director of business development, back to South Dakota. Photo by George Thompson/Webster Reporter & Farmer

The chance to move closer to her parents and get back to a small-town atmosphere drew Twyla Olson, Car Talk’s director of business development, back to South Dakota.  Photo by George Thompson/Webster Reporter & Farmer

This is the second in a series by the Reporter & Farmer, looking at people who are able to do their jobs via the Internet. See the first story in the series here. Also, you may have heard that Car Talk‘s “Tappett brothers” are retiring in September. The show will continue, however, by using content from the 1,200 episodes the two have done in the 35 years the show has been on the air, with occasional updates from the brothers.

A chance to move closer to her parents and get back to a small town atmosphere proved irresistible to Twyla Olson, Car Talk’s director of business development.

Olson grew up in Aberdeen and graduated from Augustana where she majored in English and minored in theater.

After graduation she worked for companies in Sioux Falls and Mitchell, which led her to her next job with American Public Media in Minneapolis where she served as station relations representative for national distribution.

While at APM, Olson made significant contributions to the launch, growth and evolution of the network. But more importantly it led to her joining the team that promotes one of public radio’s most popular shows, Car Talk.

Today she is director of business development for Car Talk Vehicle Donation Services, which helps stations raise millions of dollars through vehicle donations.

Car Talk Vehicle Donation Services works with more than 700 public radio and more than 200 public television stations. Its five-member team works around the country and almost entirely by computer.

The first inkling of moving to Webster came up last summer when Twyla came home to visit her parents Woody and Dorothy Olson, who live nearby.

“I found that I enjoyed getting back to the fresh air and the lakes and seeing things like redwing blackbirds,” she said from her rented home here last week. “I knew I could work from anywhere I wanted to and this unique opportunity came at the perfect time.”

Twyla and her cats have found laidback Webster to be the perfect antidote for the hustle and bustle of the big city.

She works at a computer or the phone in her home office every day making contacts and answering questions from member stations and/or listeners.

“I keep a regular schedule, but my cats usually make me stop at around five o’clock because they want me to play with them,” she said.

In addition to working at home, Olson does some traveling, especially to conferences and other special events.

“Working with people on both coasts hasn’t proved to be any problem,” she said. “The people we work with are very enthusiastic about public radio and television.”

Other members of the team live in California, Oklahoma, New Hampshire and Minneapolis, and they all stay in contact and plan strategy through e-mail.

Car Talk Vehicle Donation Services gets thousands of cars each year, but they also get boats, motorcycles golf carts and even tractors. “If it can be towed, we’ll take it,” Twyla said. “Lately we had a rash of Volvos, Saabs, Subarus and Hondas. Listeners don’t do this because they want to see a lot of money made. They do it because they can help their local station and get a tax write-off.”

Olson said the vehicles can range in value from junkyard salvage to high-dollar auction items.

Car Talk Vehicle Donation Services works with companies who specialize in finding buyers or picking up donated vehicles and getting them to regional auctions or junkyards.

Some of the more exotic cars they’ve obtained include Alpha Romeo Spiders, a custom (tiger stripe) painted Mazda Miata and a Woody Wagon.

Olson thinks her business will only continue to grow, especially as federal and state funding for public television and radio diminishes. “This is an excellent source of revenue for your local station, and it’s really simple to do,” she said.

According to Olson, Car Talk Vehicle Donation Services is recognized as the most trusted and effective service in the vehicle donation business, and if you listen closely each week, it’s endorsed by the show’s hosts Tom and Ray Magliozzi.