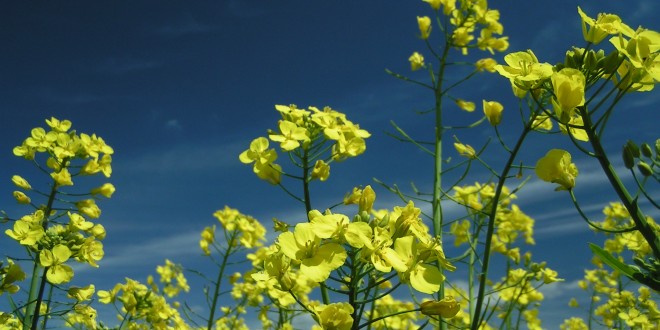 About 80 percent of the canola growing in the ditches of North Dakota contains genes that have been modified to resist some weed killers, according to researchers from the University of Arkansas.

This finding is adding fuel to the debate about “super weeds”: plants growing wild that have the characteristics of herbicide resistance, the result of either seeds spreading from fields or wild plants breeding with genetically modified crops.  These plants would be difficult for farmers to control, and the fact that these plants are reproducing out the wild may make it more difficult for organic farmers to keep their crops genetically unmodified.

Cynthia Sagers, the University of Arkansas biologist in charge of the research, said she was surprised to find the feral canola growing so widely in North Dakota. Researchers also found that a small number of the plants they tested were resistant to multiple herbicides — a combination that seed companies do not sell.

“This is more than a case of seeds bouncing off trucks,” says Norman Ellstrand, a plant geneticist at the University of California, Riverside, according to an article by Environmental Health News. “You have combinations of transgenes that don’t occur in commercial seed – some evolution has occurred.”

Industry experts say genetic transfer between weeds and crops has been going on for centuries and is not the result of biotechnology.

The research was published in October 2011 in the online journal PLoS One. Read the post on The Rural Blog here or the Environmental Health News article here.