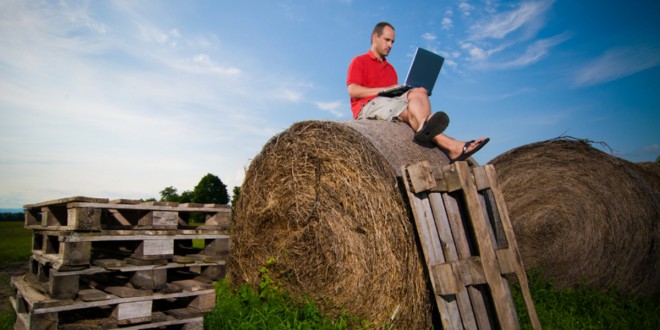 Working on a bale. Istockphoto/Mac99

FiredUp: Telecommuting may not be good for Yahoo, but it’s great for rural Dakotas

Working on a bale. Istockphoto/Mac99

The news in February that Marissa Mayer, new CEO of Yahoo, eliminated telecommuting for Yahoo employees sparked an animated discussion among the nation’s workers.

Some backed Mayer’s decision, agreeing with her that getting people into the same room is the key to innovation and creative thinking—especially for a company in crisis. Others said telecommuting was a way for workers to slack off, doing laundry or napping on the company’s time. (One might guess at least some of these folks are jealous workers who don’t have telecommuting as an option.)

For the most part, however, Mayer’s decision sparked a backlash from not only happy telecommuting workers, but from the companies employing them.

Mayer is going against a trend. According to a report by the trend analysis site New Geography, during the 2000-10 decade, 1.7 million more people started working from home. The authors in fact labeled it “The Decade of the Telecommute.” That’s a significant increase—especially considering that for many people, the speed of home internet didn’t get fast enough for effective telecommuting until late in the decade. This is especially true for rural areas, which lagged urban areas in connection speeds for several years (and in some places, though not in much of the Dakotafire region, that’s still the case). My guess is the numbers have climbed even more dramatically in the two years since.

One of the biggest arguments in favor of telecommuting on the corporate level is the money saved in real estate—no need to provide cubicle space for a worker who’s working from home. But the more intangible benefits have proven just as valuable, if not more so. Several surveys have found that workers are actually more productive when they work from home. They tend to work longer hours, and finish projects more quickly with fewer distractions to contend with. Moreover, they are happier to do so, which reduces turnover. All of this results in cost savings overall.

Once workers are doing their work from home, the next step for both companies and their telecommuting workers is realizing that home can be anywhere. Well, almost anywhere—there are still a few places in the world that are not well-connected. But if we’re talking about connectedness, the rural Dakotas are not the hinterlands anymore.

This means that telecommuning is an amazingly valuable tool for our rural communities. Many of us have heard from alumni at reunion time saying something like, “I’d like to move back home, but there’s no job there for me.” Telecommuting is a way for these alumni to move back home and bring their jobs with them. The returnee can likely keep a city-level salary but pay country-level cost-of-living.

It’s not possible for our small towns to have businesses that provide for every career that our graduates pursue—but telecommuting could allow a little piece of the work of Silicon Valley, or Research Triangle Park, or even New York highrises to happen in the rural Dakotas.

It’s also a way for those people labeled in the Hollowing Out the Middle book as “high flyers”—the ones who are ambitious and looking to lead in whatever field the pursue—to keep the careers they have built up elsewhere. The Hollowing Out the Middle book argues that many of high flyers can’t wait to leave their hometowns, but there’s at least a small percentage of those who simply leave to follow their dreams. Telecommuting could provide them a way to bring their dreams to rural places they love.

And it doesn’t have to be just alumni moving home. If we enhance our communities as great places to live, we can draw all sorts of people fleeing the crowding and fast pace of city life.

In my hometown of Frederick, I know of three workers who have been able to bring their jobs with them when they moved here. Several others created jobs that they now do from their homes. Most of those workers also have enough flexibility in their schedules that they are available for their children when they get home from school, or to volunteer in the community. Their families and our community would be poorer in many ways if these people had not found a way to work from home. 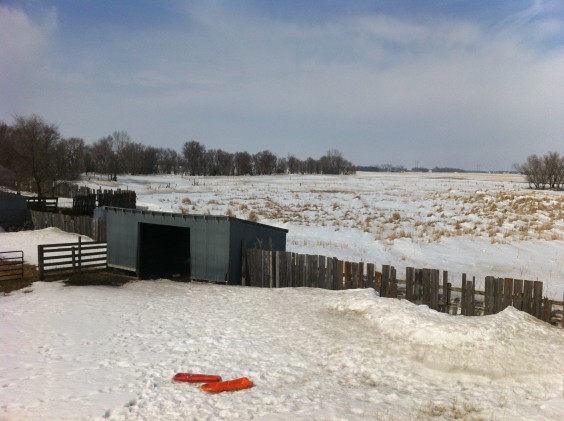 View from Dakotafire headquarters' window. My kids often end up playing outside my office window when they get home from school. Photo by Heidi Marttila-Losure

What about those arguing that telecommuting isn’t good for innovation—that the best way to spur creative thinking is to get teams working together in the same space?

There is likely some truth to that notion, especially in certain circumstances. One speaker on a “Talk of the Nation” discussion of telecommuting mentioned prototyping with engineers as an example of a type of work that yields better results when designers and engineers are in close proximity. A Washington Post writer said she estimated that the quality of her work declined by about 5 percent by not being at the office:

I couldn’t ask a colleague in the next cubicle what a better word for “cluster” was. I couldn’t suggest a project to my staff and see their eyes roll in a way that indicated I had come up with another clunker of an idea. I couldn’t run into a co-worker in the stairwell, restroom or cafeteria and, as a result of a casual conversation, stumble onto a great project.

She said that “the lack of serendipity” was the real cause for the loss of that 5 percent of quality.

Also, as one of those telecommuting workers, the time I save in not commuting is pretty much exactly the time I can then devote to walks outside.

And there’s also another way of looking at telecommuting: It fosters interactions that would not be possible without our online connections.

The Dakotafire project is a perfect example of this. Twenty-five years ago, the collaborating we do would not have been possible—or at least, it would have been difficult to the point of impractical. But working together is a natural fit: The journalists working at community newspapers across the region are writing about the same problems, differing only in local details. We first pool our efforts to take our reporting to a higher level. And through reading the stories, people in our communities realize we are not alone in facing these problems—and once we realize that, we can go the next step and try to work together to find common solutions.

We Dakotafire workers are rarely in the same room. But we find ways to work around that: We have a discussion via phone conference once a month, and we connect via e-mail for big and little matters. We use a project management software called Basecamp to make sure we are all on the same page.

It’s not perfect, I’ll admit. Some nuances of meaning are lost in e-mail, and although I am most comfortable using e-mail, people of older generations probably wonder why I don’t pick up the phone more often. We also tend to skip past small talk in e-mail or phone calls, which can be important for developing a good working rapport. Troy and I have now started a quarterly tradition of going to our communities to talk with our newspaper cohorts and people in the community, which yields a story for the magazine but also a better connection with our Dakotafire coworkers.

So our work may well be 5 percent less than it could be. But by telecommuting, it’s 95 percent better than it was before we started working together, since without telecommuting, our common work would not exist.

Maybe telecommuting isn’t what Yahoo needs at the moment. But I’m confident it’s a great blessing for our rural communities, and will only become more of one in the future.

What effect do you think telecommuting will have on our communities in the coming decade? Share your opinion on Dakotafirecafe.com!