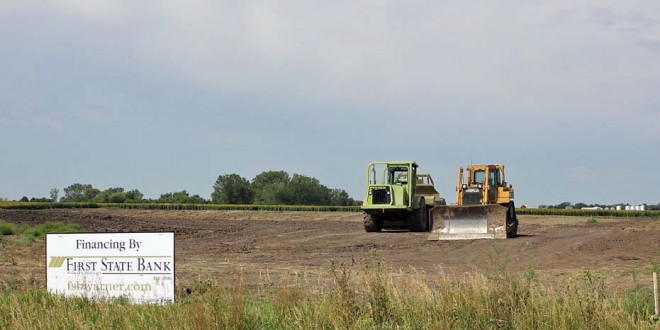 FiredUp: Let’s get those returnees back to small towns, not just Sioux Falls and Rapid City

Common Sense Manufacturing in Faulkton, S.D., is expanding and often has job openings, but it’s an outlier in many of South Dakota’s small communities. Can Dakota Roots still help them? File photo by Faulk County Record

I received a call from Gov. Dennis Daugaard the other day.

It was a recording, but a person pays attention when the governor calls nonetheless. The call was part of a new effort of Dakota Roots, which aims to help bring former South Dakotans back to their home state by connecting them with job opportunities here. (You don’t have to have Dakota roots for them to help you—you just need a desire to plant new roots here.)

I didn’t record the message, and I couldn’t find a transcript of it, so I don’t have exact wording. But I can tell you it was a pretty enthusiastic sales pitch for making a home in South Dakota, touting the job openings, low cost of living, and recreational opportunities on both sides of the river.

Here’s how it was described in a press release touting the new feature:

The recorded messages and emails from Gov. Daugaard focus on job openings, quality of life, recreational opportunities and a friendly tax structure.

“Our reinvigorated Dakota Roots program encourages the return of those who have left South Dakota by letting them know that the grass is truly greener here,” the Governor said. “I am excited to personally invite our family members and friends to move back to their home state.”

I did wonder why I received the call. Six years ago, I might have fit the bill perfectly, but since I moved back home to South Dakota at the beginning of 2008, the governor was preaching to the converted.

Apparently, South Dakotans can request the governor call a friend or family member to tell him or her about the services available through Dakota Roots. Since I’m pretty sure my friends and family know I am already happily settled in South Dakota, it’s likely that someone just wanted to make me, as Dakotafire’s editor, aware of the service.

It’s a fine effort, I’d say. Moving home to South Dakota is more likely to be a good career move than it’s been since the booming post-war years. The unemployment rate in the Dakotas is far lower than in other parts of the country; with high-speed Internet common through much of even the most rural places, telecommuting is a clear option. With an increasing number of employers embracing telecommuting, former Dakotans can come home to the Dakotas and bring their current jobs (which may have been the reason they left in the first place) back with them.

I do have a small complaint with the Dakota Roots program, however. Though Gov. Daugaard mentioned in the message South Dakota’s small towns and mid-sized cities, the Dakota Roots program is clearly focused much more on the latter than the former. Check out the map of placements through Dakota Roots from 2006 to 2011 (taken from the S.D. Department of Labor 2011 annual report): 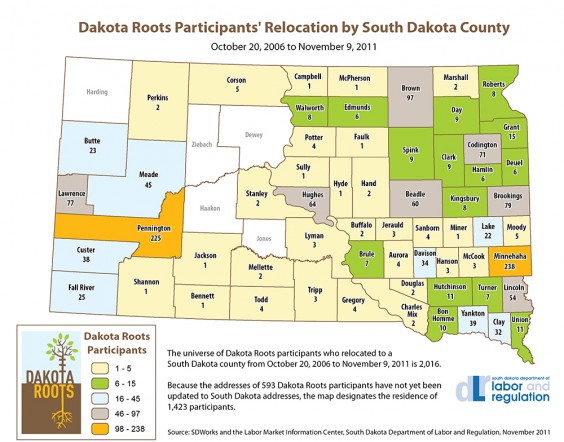 It’s not really surprising that the greatest number of placements happen in Minnehaha County, followed by Pennington. Our bigger cities are more likely to have job openings. But it is a little disheartening to see that Dakota Roots is not doing much good at all for McPherson, Faulk or Marshall counties, which have had just four relocations combined in that five-year period.

I think it points to an issue with how the Dakota Roots program is structured. What happens if, say, someone says they want to move to a small town, such as the town where they grew up? How does Dakota Roots help?

There are some job openings in towns the size of Faulkton or Clark, but the chance that the job that’s open in a small town fits the qualifications of the person looking for work is not that great. I asked Dawn Dovre from the South Dakota Department of Labor how they can help if someone requests a specific place to relocate that does not have many job openings. She said that through their connections with employers in the area they ask around if there are jobs that aren’t advertised. That’s a help, but that’s probably not going to yield a whole lot of job opportunities either.

The basic problem is the Dakota Roots program is focused on jobs: the goal is to “fulfill the staffing needs of South Dakota businesses,” according to State Labor and Regulation Secretary Pat Roberts. And there just aren’t a whole lot of job openings in South Dakota’s small towns. What they have, instead, are opportunities—empty buildings or storefronts, or a lack of a mechanic or plumber within a reasonable distance. These are not possibilities that show up in the Department of Labor database, because there is no employer to advertise for them.

That doesn’t mean these small-town opportunities are secrets. Quite often the economic development group knows that there is a need for a plumber, or that a newly empty building would be well-suited for small manufacturing. Are those opportunities being made known to the people in the Dakota Roots database? The tiny numbers for rural counties in the map of Dakota Roots relocations would suggest not.

There may also be people who would like to relocate and start a business; Dakota Roots could help connect those potential entrepreneurs to resources in the state. The number of business ideas that actually get to a grand opening are a small fraction of the total, connecting people with resources to help them evaluate and improve those ideas could boost the percentage somewhat.

And what about people who have a good job but would like to move to a new location and telecommute—couldn’t Dakota Roots advise them on how to negotiate with their employers and advise them on broadband availability, for example?

Right now, Dakota Roots is doing some good work helping bring new (or returning) people to South Dakota’s cities. But if the program really wants to help South Dakota’s small towns and rural areas as well, as Gov. Daugaard suggested in his message, they may want to broaden their strategy.

One more thing: If you are a Dakotan living elsewhere who would like to move back home, Dakotafire’s Homecoming Guide is a good place to start.