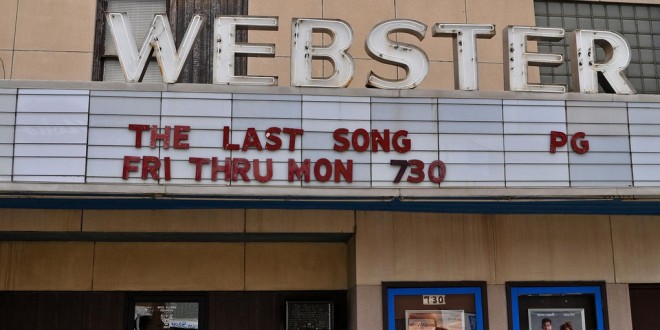 Webster Theatre is at a crossroads

By Webster Reporter and Farmer November 4, 2012

The Webster Theatre is at a crossroads: The movie industry has decreed a switch from 35mm films to a digital format by 2014, and the Webster Theatre’s owners are considering whether they can make the transition.

(See Dakotafire’s earlier story about how area theaters are coping with the move here.)

Owners Gary and Margaret Kwasniewski took over ownership of the Main Street movie house in 2004 and say they’ve enjoyed the business and they would like to continue on, but the investment of $70,000 to $100,000 for a new projection system is a daunting proposition.

“We’ve tried to keep our prices down to keep the theater as a safe place where kids can go. We have our regular customers depending on the movies, but we depend on kids and families.”

Currently the Webster Theatre is open four nights a week, Friday-Monday. To be a first run theater (where the latest films get first showings), the theater would have to be open six nights a week, which the Kwasniewskis say would be impossible for them since they both have day jobs. Gary and Margaret often work each weekend night, and their children often help out also.

The benefits of switching from celluloid to a digital format are enormous for Hollywood. A movie printed on film costs the studio between $3,000 and $4,000, whereas a digital version shipped to the theater on a hard drive costs about $75. Digital films provide a sharper brighter image and open the door for 3-D movies, live sporting events, concerts and conferences.

Webster Theatre uses a Minneapolis-area booking agent to set up its play list. The agency bases its selections on reviews and ratings. The couple says that’s worked well, but they’ve also booked movies based on customer recommendations.

But with days of celluloid soon to end, the real question for small theater owners like the Kwasniewskis is whether there is enough business to pay for the costs of updating. Almost all small-town movie theater owners will tell you it’s not a get-rich scheme. According to the National Theater Owners Association, as of August, 3,447 out of 5,700 theaters have made the switch to digital.

Around the area, small-town theater owners have successfully made the transition from fllm to digitaL A good example is the Strand Theater in Britton where owner Tom Faber partnered with the community foundation to raise $65,000. The Bryant Cinema also stayed open when community members raised $30,000 to buy the theater in 1991, and they’ve operated it for the last 13 years using volunteers.

Elsewhere, some theaters like those in Gackle and LaMoure, N.D., have chosen to close because the costs will exceed the benefits.

The Kwasniewskis are looking at installing one of several types of digital projection systems sold by vendors in Minneapolis and Iowa. They have their fingers crossed the existing sound system will be compatible with a new projector, which should cut down on the costs.

“We are very appreciative of all the support the community has given us since we took over,” Margaret said. “If the community tells us that they want us to stay open, we will probably do it.”

The Kwasniewskis hope to have all the pieces in this puzzle put together shortly.  If changeover happens, it would be sometime next year.