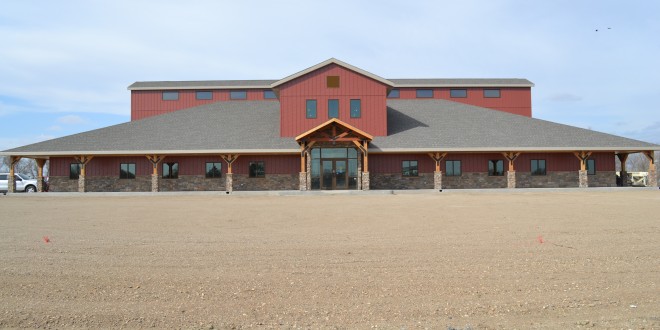 FiredUp: Beauty is part of the structure of building to last

We are a very practical people here in the Dakotas. That’s a good thing—as long as we don’t let it limit our thinking.

Consider, for example, the large barns that used to have a prominent place on every farmstead, shaping the view of the landscape with their presence. They were very practical buildings, working as part of a system of keeping livestock, but they were also beautiful. Much thought went into the design of their roofs especially, with different parts of the country taking pride in their own styles.

Now think of the buildings that have replaced them on modern farms. The old barns no longer fit in modern farming systems; now the large buildings on farms often shelter machinery instead of livestock. Most of them are not beautiful. They weren’t intended to be—the focus was on filling the practical need of the farm.

Take a look at the built environment we are creating, both on farms, in our business and industrial districts, and even in our neighborhoods, and it’s easy to see that utility and cost often dominate building decisions.

But think back to those big barns, and the farmhouses that were next to them: Previous generations did not see insurmountable trade-offs among practicality, affordability and beauty.

Architect Brad Ciavarella of Mitchell, S.D., and his wife like to look at old farmhouses when they have a chance. Most of them feature fine craftsmanship, he said.

“You see all these fancy moldings over the entrances, and the columns aren’t just simple columns—they are shaped,” Ciavarella said. “And (the farm families) didn’t have anything. They probably had a sod house before they built these houses. They just aspired for more.”

Sarah Susanka, architect and author of the “Not So Big House” series of books, explains that older homes have character and craftsmanship that houses built after World War II typically do not. When the flood of G.I.s came home, the focus was on building quickly, and many of those details were lost. Susanka advocates adding back in those details.

“A lot of the things we do for economy strip away the character that is what we respond to in terms of beauty,” Susanka said. “We respond to the details. You take the details away and it’s just the bare bones, and there’s nothing really to respond to. It ends up feeling ‘blah.’”

We Dakotans have somehow become hesitant to aspire for beauty. Do we think we don’t deserve to live in beautiful places? Do we think we’ll be judged as “getting too big for our britches” if we aim to make our small towns grand?

I don’t know. But whatever the reason, it’s time to reconsider. With Susanka’s and Ciavarella’s assistance, here are five reasons to make buildings that are beautiful as well as practical. 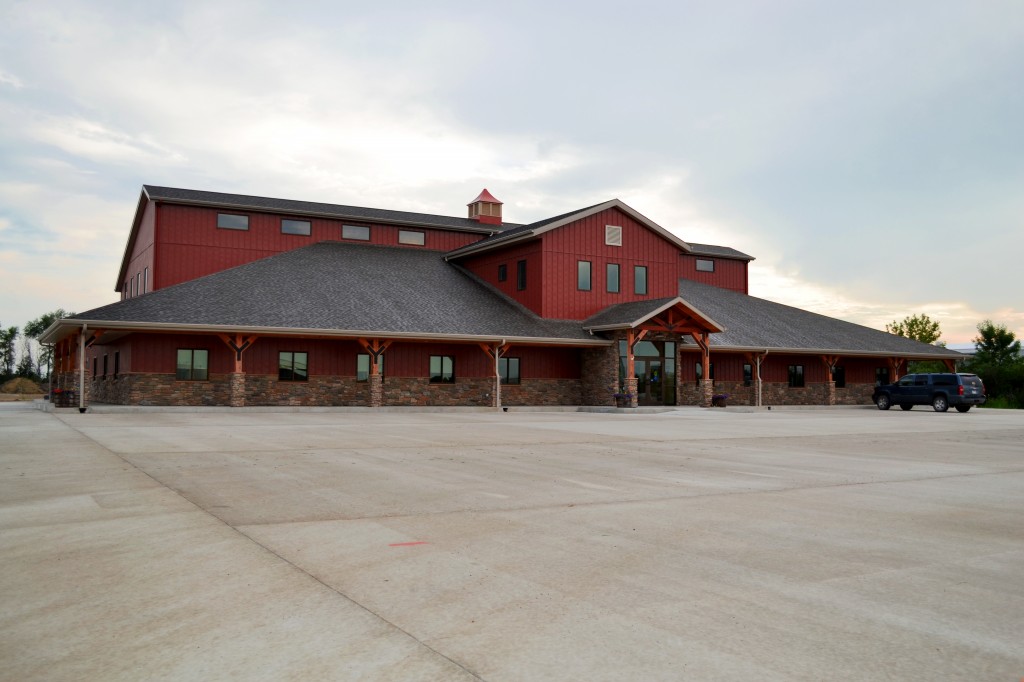 The North Central Farmers Elevator building in Ipswich, built by Quest Construction of Aberdeen, was designed with some key people in mind – area farmers, whose loyalty helped the company become the success it is today.
“We are owned by and serve ag producers, so the building needed to look like the kind of business we do,” said Deanne Hoyle, human resources manager at North Central Farmers Elevator. “We wanted it to be welcoming, as well as open and spacious for our farmer-owners, because it is their building.”
The building features board siding and the lines of the exterior are reminiscent of large barns that grace farmsteads in the area. Courtesy photo 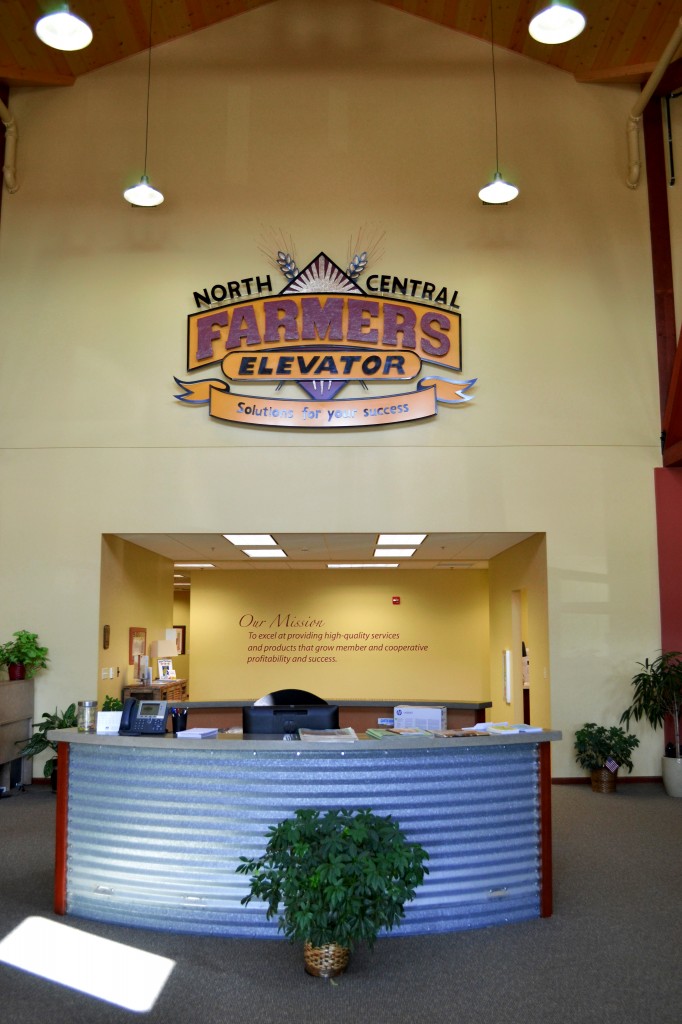 The reception desk sits below a custom, hand-made welded steel replica of the NCFE logo, perched prominently above the company’s mission statement, “To excel at providing high-quality services and products that grow member and cooperative profitability and success.” The reception desk itself features a panel of curved, rippled steel, resembling the exterior of a grain bin. More steel panels, taken from an old wood house elevator at the Craven terminal, were installed on the ceiling of the board room. Photo courtesy NCFE

1. Building beauty sends a message about what you value.

A building that is beautiful, well-built and designed to function well sends a message, Ciavarella said: “Hey, somebody really cared to think about this building.” It also shows that excellence is valued, which can reflect well on a business or the people in a home.

If instead a building is made with materials that are cheap but not durable, it sends a message that the builders aren’t thinking long-term. “We need to be less of a throwaway, short-term-thinking society,” he said. 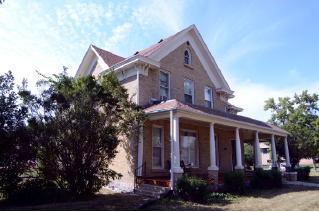 The Fiksdal House in Webster, once a stately old home, was transformed into apartments. The decking on the wraparound porch was recently rebuilt, providing a place for residents to sit and watch the sunrise. Photo by Troy McQuillen

The young families that small towns want to lure back home are seeking amenities that will improve quality of life. Beauty is part of that, whether in buildings themselves or how they take advantage of natural beauty. Live in a house with a porch where you can take in the sunset, and you’ll go to bed in a different frame of mind than if you lived in a house with no sunset view—a small but definite quality-of-life improvement, Ciavarella said.

Susanka designs with natural materials, such as wood or stone, in mind because they do more to connect people to the natural world. “Those kinds of things affect people deeply,” she said. Light is also a significant factor in a well-designed home: “Access to natural light hugely affects our sense of well-being,” she said, adding that she thinks seasonal affective disorder and sleep disorders may well be caused by people not getting enough natural light.

Design of neighborhoods can affect how people interact. A business district built around a central square, as some small towns in Iowa have, gives a focus on community life and even improves business for those shops around the square because people are more likely to linger in that common space. “People want to gather in places that are beautiful,” he said. That’s a quality-of-life bonus that can draw people to a community. 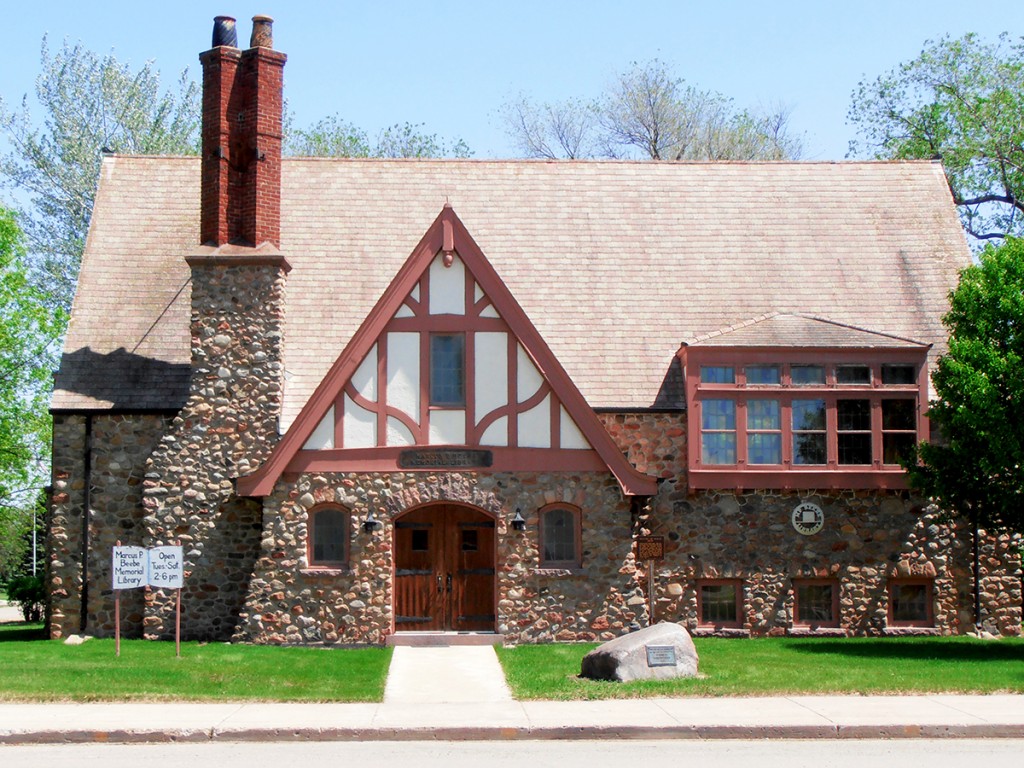 The Marcus P. Beebe Memorial Library in Ipswich stands as a memorial to Beebe, a pioneer in Dakota Territory. It was built in 1931 and is still open to the public today, 2 to 6 p.m. Tuesday through Saturday. Photo courtesy Laura Ptacek 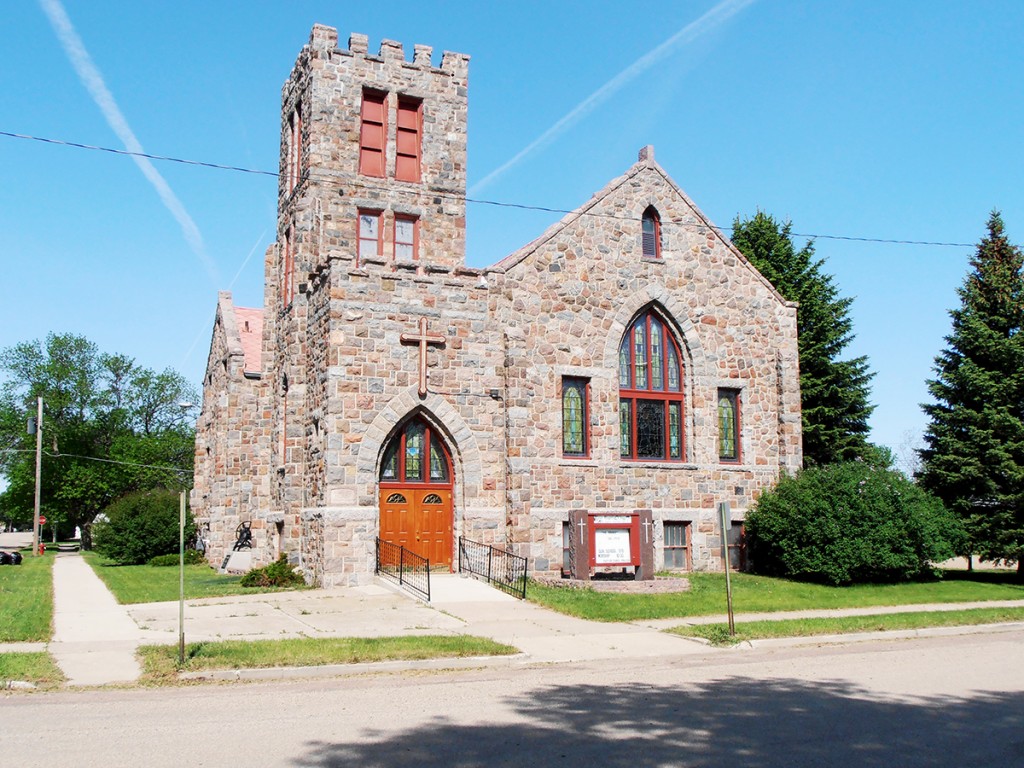 A church history states that the Gothic-style First Baptist Church in Ipswich went up after charter member Leota Beebe offered to page two-thirds of the $25,000 cost of a new building. The membership then pledged $11,000, plus the men of the church did much of the labor. The church was dedicated in 1926. Photo courtesy Laura Ptacek

3. Beautiful buildings are more likely to be preserved.

Maintenance is more likely to happen if it comes from a sense of love than from a sense of obligation, and people are more likely to love what they find beautiful. “If you want something to last for a long time,” Susanka said, “the part that’s the most important is that human beings want to look after it. If something is not beautiful, we tend to, over time, discard it… You can have the most ‘green’ building in the world, but if it’s not beautiful, it’s not sustainable.”

The big old-style barns still on the landscape today are probably not practical for those who live on those farms, but they are cared for because they are cared about. Their appearance is a part of that. 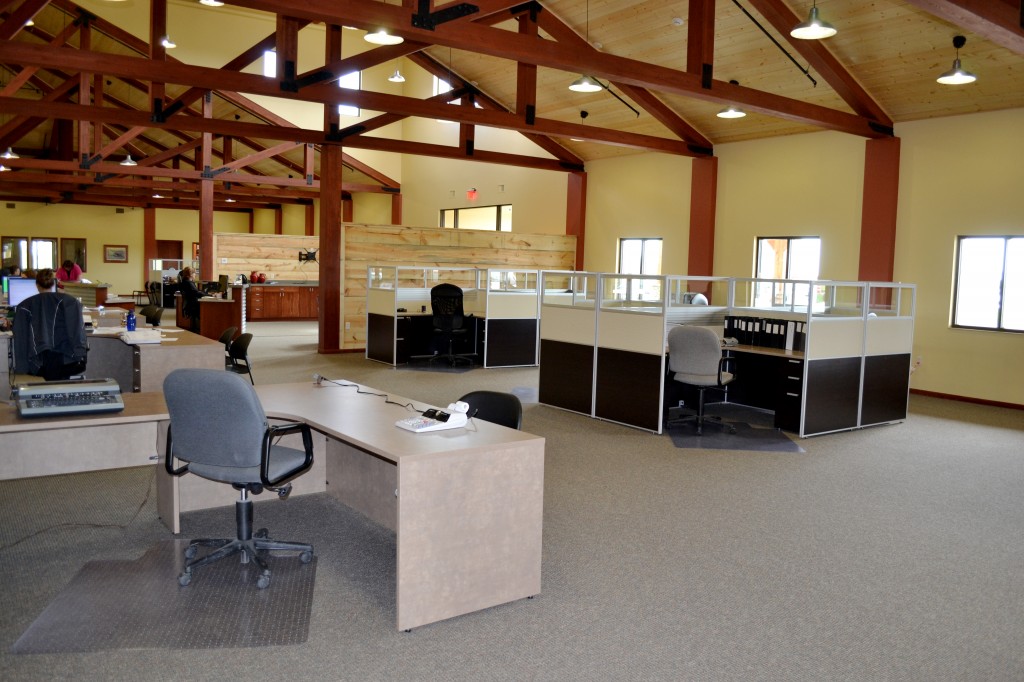 4. Beauty and thoughtful design don’t have to cost more.

In fact, good design can cost less that building with only utility in mind, Ciavarella said. Part of good design is knowing how to use materials in innovative ways, which can lead to cost savings.

Designing well can also mean less space is required, which can save in materials in the building phase and in maintenance costs over the life of the building.

“We’ve tended to make houses bigger and bigger and bigger to compensate for lack of detail,” Susanka said. “So actually people are ending up spending more because they’re building more square footage, when if we would just put in some character, we could build about a third less space, make it all work and make it feel bigger.”

She added that scrimping on character-enhancing details during construction can also make a home worth less when it comes time to sell it.

Susanka advocates making houses a little smaller, taking the dollars saved from square footage and putting them one or two interesting details. “Just pick one thing and do it well,” she said. “It will differentiate you from the rest of the market.” 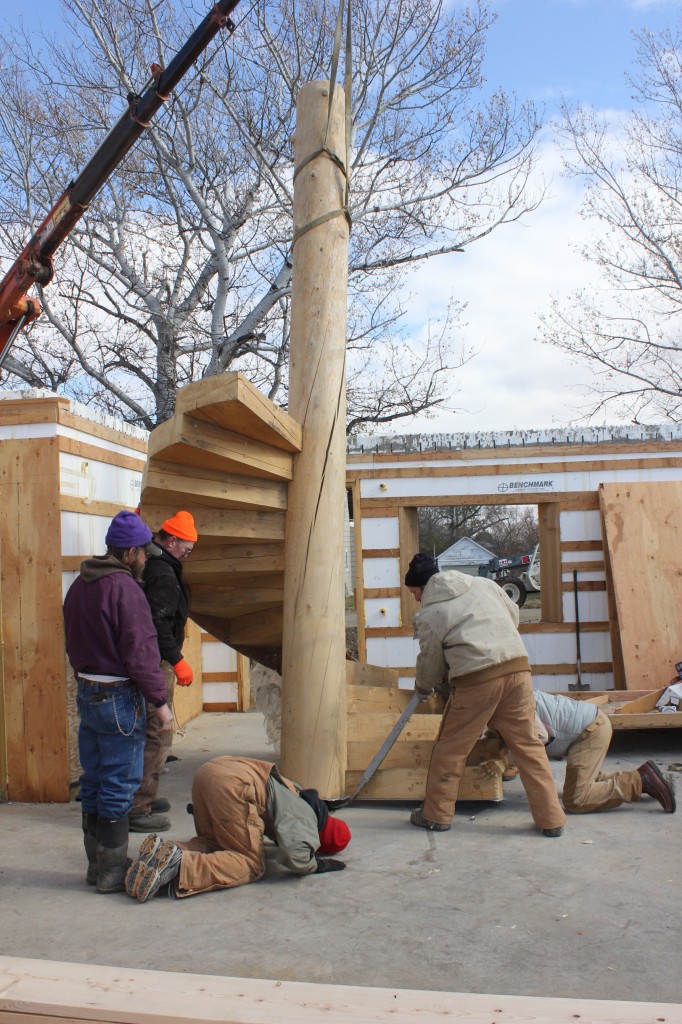 A home being constructed by Ross Hansen (left rear) and Pfeifer & Son Construction in Faulkton will feature a number of unconventional designs and materials, such as this spiral staircase.
“The tree it’s cut from was a spruce that was 70 feet tall and was downed in 2007 by fire kill,” Hansen said in October 2012, when they were working on this staircase. “I milled it in 2008. It was about 80 years old… The center pole has a metal core base that goes into the floor, and each of the stairs was cut to be driven into the wood and held by epoxy.” Photo by Garrick Moritz/Faulk County Record

It sounds kind of New Age-y, doesn’t it? And yet, it’s actually a very old idea: Think of churches built during the Renaissance, which were designed to inspire awe. “Beauty, something that appeals to the higher senses—we have a need for that. Absent that, we suffer somehow,” Ciavarella said. “Now, we are pretty adaptable as creatures. And so if we have to live in an ugly place for a while I think we can adapt. But it’s not good for the soul and spirit.” He quoted Winston Churchill: “We shape our buildings, and afterwards our buildings shape us.” How, then, do we want to be shaped?

The way to start adding beauty to our spaces is just to start. Susanka shared a story about a man in a rundown neighborhood who first fixed up his own garden, then decided he would plant a tree for one of his neighbors each year. “It went viral,” she said. “People started to care about the houses because he had.”

He offered a vision of what was possible and a little bit of assistance, and the whole area turned around in a matter of years, she said.

“The story goes to show that each one of us has the capability of shifting a whole community just by our doing what we know how to do and doing it well.”

Learn more about the two architects at their websites: www.ciavarelladesign.com  and www.notsobighouse.com.