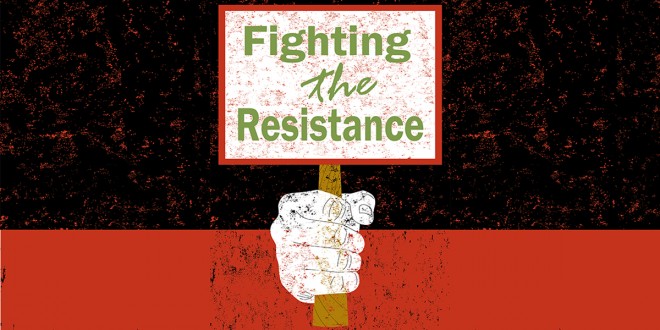 Link between antibiotic resistance and use in livestock recognized by more in ag, medical communities

By Christopher Cumo and Heidi Marttila-Losure

You probably don’t want to—it was not a success. But the plot serves as a helpful analogy: An unbelievable series of disasters overwhelms the planet—such phenomenal crises that a scientist declares that half the country will meet an inevitable death. Through all the disasters, however, the hero (Dennis Quaid) and his family somehow find ways to survive. And the last scene of the movie shows that pockets of people all through the part of the nation declared beyond hope had managed to survive as well. Inevitable death wasn’t so inevitable for everybody.

The scientific description of this is the evolution of resistance. This is the first of two stories to look at how the development of resistance is affecting agricultural decision-making here in the Dakotas, and nationwide. See the second story here.

The success of antibiotics has dramatically changed the way we think about illness and recovery since their development in the 1940s.

Ailments that used to have long recovery periods or a high risk of complication or even death have been made manageable with the use of antibiotics. A few doses of “the pink stuff” and children with strep throat or ear infections can go back to school in 24 hours.

Unfortunately, antibiotics are not as potent as they used to be. Our thinking may need to change again—both in how we treat illness, and, some experts argue, in how we raise livestock. Recent studies have drawn a link between the use of antibiotics for animals and antibiotic-resistant bacteria in humans, and some leaders in medicine and agriculture in the Dakotas have agreed with those findings.

The rise of resistance

Resistant bacteria now swamp antibiotics that had once been effective for treating people, according to Dr. Jim Hargreaves, an infectious disease physician at Altru Health System in Grand Forks, N.D.

Forty to 50 percent of staph infections are resistant to a class of antibiotics. Hargreaves said he and other physicians must use more toxic drugs to treat infections because they are running out of antibiotic varieties that work.

Dr. Thomas Frieden, director of the Centers for Disease Control and Prevention, described “nightmare bacteria” in a telephone conference call in March, as reported in the New York Times. The bacteria normally reside in the gut, but when they invade a place they should not be, like the lungs or bloodstream, the death rate can reach 50 percent. In 2001, 1 percent of these bacteria was resistant to the “last resort” antibiotic carbapenem; in 2012, 4 percent was resistant.

According to state epidemiologist Lon Kightlinger, the S.D. Department of Health reported 86 cases of staph infection resistant to the antibiotic methicillin (the bacterium is called methicillin-resistant Staphylococcus aureus, or MRSA) in 2012. North Dakota had 89 cases in 2011, the latest figures available on the N.D. Department of Health website.

Many of those who are sick with MRSA are elderly and already sick otherwise, but not all—the 18-month-old son of Chicago-area public health researcher Everly Macario son died of a MRSA infection in 2004.

“I don’t know why people aren’t freaking out about the fact that we’re nearly at a post-antibiotic era,” she said, as quoted in a letter by Rep. Louise M. Slaughter (D-N.Y.) to the New York Times.

Public health researchers have long warned that improper prescription and use of antibiotics is causing antibiotic resistance.

“There are studies that show that as people, we have used too many antibiotics, too many anti-bacteria hand soaps, too many prescription medicines, and as a result we have caused our own problems,” said Amanda Radke, editor of Beef Daily in Mitchell, S.D.

Many have suspected that another cause could be even more problematic: The use of antibiotics for livestock. According to the Food and Drug Administration, 80 percent of all the antibiotics sold in the United States are given to livestock.

Antibiotics are given not only to treat sick animals, but also at “subtherapeutic” levels to encourage growth and prevent infection in crowded conditions. One hypothesis as to why the antibiotics help the animals grow is that livestock not on antibiotics might harbor a minor, asymptomatic infection that they must fight on their own, according to Marc Bauer, North Dakota State University associate professor of animal science. When treated with low levels of antibiotics, these infections disappear and the animals have more energy to put into growth.

This subtherapeutic use of antibiotics, while given in low doses, is nevertheless problematic, argues David Kessler, physician and commissioner of the FDA between 1990 and 1997.

“When he accepted the Nobel Prize in 1945 for his discovery of penicillin, Alexander Fleming warned that ‘there is the danger that the ignorant man may easily underdose himself and by exposing his microbes to nonlethal quantities of the drug make them resistant,’” Kessler wrote in a March column in the New York Times. “He probably could not have imagined that, one day, we would be doing this to billions of animals.”

Not everyone is ready to draw the line between antibiotics in livestock and antibiotic resistance in humans.

Conceding that the problem of antibiotic resistance is worsening, Laurie Robey, laboratory director at Avena Queen of Peace hospital in Mitchell, S.D., cautiously says that “we really can’t speak to the antibiotic use in livestock and the effects it has on human resistance.”

North Dakota State University veterinarian and associate professor of animal science Gerald Stokka believes that there is not enough evidence to prove that livestock can transmit bacteria to humans, though he concedes that it is possible.

“Agriculture is being blamed for (antibiotic) resistance in the human population, and there is no scientific proof that agriculture is the cause,” says VanderWal. “A bigger reason I have heard from health professionals is overuse by some doctors who have patients who demand ‘something’ to make them feel better. I have heard of cases where a person went to a doctor with a virus demanding a remedy and received an antibiotic just to appease him or her.” Stockmen “feel much of the blame is being placed in the wrong direction.”

The science is, however, connecting the dots in at least some specific cases. One recent study in the journal of the American Society of Microbiology tracked the passage of staph from humans to swine. Once in the pigs, the staph acquired resistance to the antibiotics tetracycline and methicillin and jumped from the pigs back into the human population. The resistant staph has also spread to cattle and chickens.

This and other recent studies have convinced several local researchers and others of the livestock-resistance connection.

“We are paying the price for overusing antibiotics in agriculture,” Hargreaves said.

Bauer agrees that livestock can transmit antibiotic resistant bacteria to humans and knows of instances in which veterinarians and stockmen have contracted an infection from sick livestock.

Kightlinger likewise holds the view that “there is a connection between livestock and human antibiotic resistance.”

North Dakota State University professor of animal science Neil Dyer agrees that “there is a connection between routine antibiotic use and resistance in some types of bacteria, particularly E. coli and salmonella, that has been pretty well documented. And, yes, these bacteria could be transferred from animals to people.”

Even when asked to comment on the latest studies, however, VanderWal was unconvinced.

Finding solutions in judicious use

Oedekoven notes that not all antibiotics pose the same risk. Some antibiotics given to livestock are similar to those used to treat humans, in which case the prospect of transfer of resistant bacteria to humans is great. Other drugs, in this case strictly classified as antimicrobials rather than antibiotics, are not closely related to antimicrobials used to treat humans, in which case the danger of transmission to humans is less, Oedekoven said. Ionophores, which are given to cattle to promote health and weight gain, are example of this second type of antimicrobial.

For those antibiotics that are important to human health, the Food and Drug Administration “is implementing a voluntary strategy” to eliminate their use in livestock for growth purposes in the next three years, according to the FDA’s website. “FDA believes that using medically important antimicrobial drugs to increase production in food-producing animals is not a judicious use.”

The FDA has indicated that this voluntary measure would be followed by a mandatory one if producers keep using them anyway, but Kessler points out that data on how producers use antibiotics is not available, so the FDA has no way to know if the measure is working. A bill in the U.S. House proposing to collect data from drug companies and producers on antibiotic use has no Republican support and is therefore unlikely to pass.

Hargreaves believes part of the solution lies in the use of narrow spectrum antibiotics that target only a single class of bacteria. He also wishes government would provide incentives to drug companies to develop new antibiotics, perhaps by lengthening patent protections.

Talk among the farmers

While several of those interviewed for this story said antibiotic resistance doesn’t come up much in discussions among livestock producers, Oedekoven said it’s a topic of concern.

“Certainly livestock producers understand the significant benefit that antibiotics provide to both humans and animals,” Oedekoven said. “Producer-led initiatives … encourage producers to … use antimicrobials responsibly and judiciously. Livestock producers are concerned that public misconceptions or misinformation surrounding antibiotic resistance may jeopardize the availability of these important drugs for animal health.”

Even if using some types of antibiotics at subtherapeutic levels in livestock is still permitted by the Food and Drug Administration, some livestock producers in North and South Dakota have moved beyond this approach.

Stokka counsels stockmen to use antibiotics sparingly and notes that antibiotics are best used to treat infections.

North Dakota rancher Blain Bruner administers an antibiotic only when cattle are sick.

South Dakota rancher Jenn Zeller seldom uses antibiotics, even when an animal is sick. An animal must be quite ill before Zeller will relent and give it an antibiotic.

“We believe that Mother Nature is the best cure,” she says.

She thinks she and her husband are in a minority in using antibiotics so sparingly. Whether they remain so depends on how society and government decide to use this potent arrow in the quiver of modern medicine.

Do you think there is enough evidence now to change the way antibiotics are used for livestock?

Farmers, we’d especially like to hear your opinions. Are there ways to use antibiotics in farm operations responsibly? How would you define that? Would you be willing to report on your use of antibiotics in your livestock operation as a public health measure?

Nonfarmers, what are your thoughts on this issue? What steps should be we taking to address antibiotic resistance?