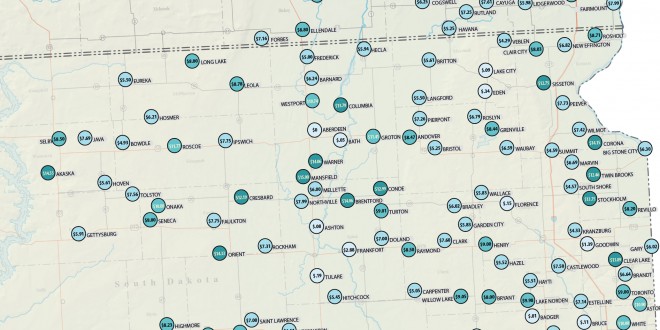 Editor’s note: This is the second story in a two-part series. See the first story here.

When it comes to the U.S. Postal Services’ cost for renting post office buildings in the Dakotas, price varies as much as population, and the reasons for those rental rates can vary just as much.

Dakotafire Media looked at lease agreement data for 201 eastern South Dakota post offices (ZIP codes 57001-57481) and 87 southeastern North Dakota post offices (ZIP codes 58001-58081 and 58401-58497). There was some correlation between the rental rate and the distance between the ZIP code of the post office and the ZIP code of the property owner: In general, the properties with rental rates lower than average were more likely to have a local owner. (See this infographic for more information.)

Beyond that, finding a rhyme or reason to the rates isn’t easy. Some building owners charge nothing for the use of their facilities; other owners charge significantly more than what would be expected to be the going rate for other commercial space in the community. 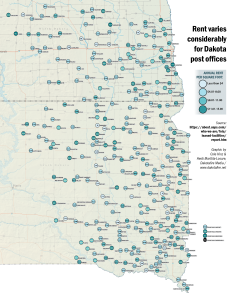 Rental rates are determined by “the market,” according to Pete Nowacki of U.S. Postal Service Corporate Communications. The definition of “market,” however, may not be the same for post offices as for other commercial rental properties.

A lack of comparable facilities in communities makes it tough to find a price point, according to Jim Thorpe, owner of Thorpe Realty and Auction in Aberdeen, S.D.

Normally, “you’d look at what a similar property rented out for,” he said. “My experience in some of those small towns is that the commercial businesses are owned by the commercial operator or business. I don’t think there’s a real easy way to determine what a market rate rental would be.”

“In essence, it’s what the market will bear in that location,” he said.

It’s important to figure the cost based on other rental rates within that community, not based on rates of a larger community, because the building values of every community are going to be different. “The true market is what the average person would pay for a lease on a building on Main Street,” Thorpe said.

Real estate in smaller towns often is valued lower than in larger communities, because properties tend to be more abundant, with fewer prospective buyers or renters.

“At one time, somebody said you could rent any building for $1 per square foot in Ellendale, N.D., because it’s a small town” with more supply than demand, Thorpe said.

At least in some instances, Thorpe said, renting buildings to the federal government is seen as a business opportunity. He remembered dealing with a person years ago who was trying hard to get a lease agreement with the Farm Service Agency because the rental rates are “out of whack.”

“The government doesn’t understand these small towns,” he said. “They’ve just got a rate they pay, and they don’t adjust it for what the market will bear.”

“If it costs $8 for a space on Sixth Avenue in Aberdeen, S.D., what should Leola, S.D., be worth?” Thorpe asked, comparing post offices located in communities with respective populations of roughly 26,000 and 450. “Not $8. That building in Leola, S.D., is probably worth $50,000. You’ve got the property, and you’re going to get paid way over the market rate for rentals. If you’re going to rent a building in Leola, it wouldn’t cost you $8 per a square-foot—I guarantee it—if it was another building (for another purpose).”

Each lease is unique

The Leola post office is one of 70 John Hamilton, a dentist from Williston, N.D., owns in four states, and he says more goes into figuring post office rental rates than sheer market value.

“It’s like kids in a family. They’re part of the same family, they have the same last name, but every kid is different,” he said. “Every single one is different.”

Responsibilities such as snow removal, lawn maintenance and utilities factor in, and special terms exist for “multi-use” buildings—those in which the post office is one of two or more tenants.

Although most post offices in larger communities rent for more dollars per square foot, Hamilton’s largest, a 24,661-square-foot facility in Mitchell, S.D., a community of about 15,000, brings in his smallest per-unit rate, at just $1.82 per square foot, or $45,000 annually. That agreement, he said, was negotiated by a previous owner.

“In that lease, there is also a component where they at any time after the base term can buy the property for an established amount,” he explained. On larger properties, “it’s a very technical investment. It’s something like buying bonds almost. You’re dealing with very, very tight markets.”

Hamilton’s highest per-unit rent, $9, is made on a 520-square-foot building in Toronto, S.D., that rents for $4,680. That building, he said, was not originally built as a post office. The higher per-unit rent, he said, is necessary, to balance out the cost of owning and maintaining it.

Dennis Pottenger of Castle Rock, Colo., owns three post offices in South Dakota, including the one in Conde, a community of 140 people. The 1,420-square-foot facility was built in 2005 and later purchased by Pottenger and his business partner. It brings in $18,447, or $12.99 per square foot—an amount some locals find astonishing, but which Pottenger said is essential.

Pottenger and many others have purchased parcels of land selected by the Postal Service and constructed buildings to USPS specification with the intent to lease out a post office. The rental price is often significantly higher than other commercial rents in small towns, but the cost of specialty postal equipment put into new buildings accounts for much of the rent. Considering that factor, Pottenger said, the USPS typically pays “less” than the market value for his buildings.

“Now they’re saying they’re losing money and cutting rents—sometimes 30 percent—or they’ll move into other buildings,” he said, but doing so and simultaneously saving money may not work. “There’s a lot of special stuff that goes into a post office. So they can go find a place in a strip mall, but by the time they put all of the equipment in there as they asked the builder to, they’re going to pay the same amount as the rent they do now, or close.”

Construction of new post offices has slowed down, according to Pottenger. And, if the USPS pulls out of the buildings that were constructed specifically for postal use, builders often are stuck with properties that will lose money.

“There’s not a big demand for (commercial space) in South Dakota—especially the way you build a post office,” he said. “They’re probably farming communities, and probably at best staying stable—not growing—and the volume of (First Class) mail is decreasing.”

Correction: The first story in this series had the wrong title for Susan Ukaonu. She is a clerk at the Kulm Post Office. The postmaster for the Edgeley, Jud and Kulm post offices is Miles Gehlhar.