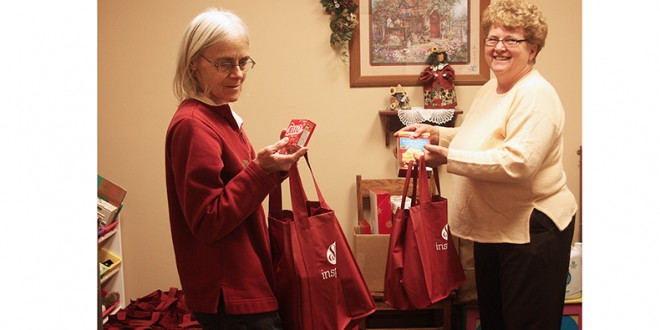 Hunger in the Dakotas hides in plain sight

Are there hungry people in your community?

Yes, the numbers say. One in 13 people in North Dakota, and one in eight in South Dakota, is food insecure—meaning they often wonder where their next meal is going to come from.

Yes, school administrators say. For children in our own communities, learning is sometimes more difficult because of hunger.

Yes, the employees at food pantries say. Thousands of people come through their doors each year.

We may not see these hungry people, explains Matt Gassen, executive director of Feeding South Dakota, because they are hidden in plain sight.

If you are wondering what the face of hunger looks like in South Dakota, “all you have to do is look in the mirror,” Gassen said. “It looks like you or I.”

“It could be that elderly couple you sit next to on church on Sunday, or it could be the child in a neighborhood playground. It could be your neighbors coming home from work,” Gassen said. “It’s all of those types of people.”

Thankfully, a number of programs in our communities are providing food to the hungry. Some are associated with the two statewide food banks, Feeding South Dakota (based out of Sioux Falls) and Great Plains Food Bank (based out of Fargo), while others gather all their donations locally. Some programs serve children, and others serve senior citizens.

The need, however, is great—and, despite the end of the national recession, it’s not going down, and in some communities it’s increasing. 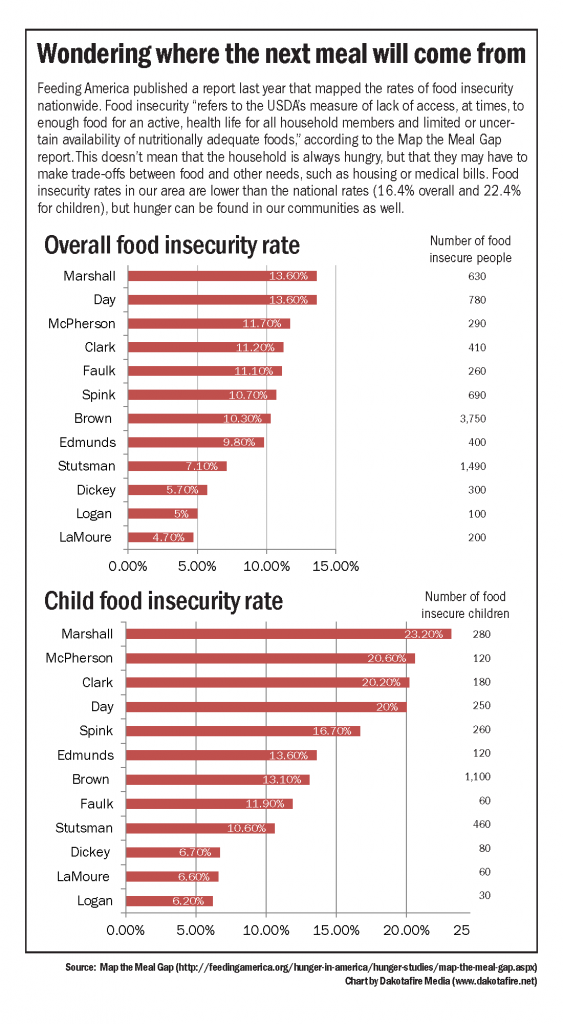 Food insecurity “refers to the USDA’s measure of lack of access, at times, to enough food for an active, health life for all household members and limited or uncertain availability of nutritionally adequate foods,” according to the Map the Meal Gap report.

The Dakotas’ hungry are more likely to be found in reservation counties. Of the 11 poorest counties in all of the United States, six are in South Dakota (Buffalo, Shannon, Ziebach, Todd, Corson and Dewey) and one is in North Dakota (Sioux).

Hunger is fairly common in those counties, with between 17 percent and 28 percent wondering where their next meal will come from, according to Map the Meal Gap, a 2011 report published by Feeding America.

In Dakotafire counties, there’s a clear difference between North and South Dakota: Dickey, LaMoure, Logan and Stutsman counties in North Dakota have rates of food insecurity about 5 to 7 percent, while all of the counties that Dakotafire serves have rates of about 10 percent or higher.

People serving the hungry in our communities say the need is either holding steady or increasing.

In Clark County, the number of the hungry served by the Interlakes Community Action Program has been consistent, according to Jeanne Fuller, ICAP director.

Jesse Knittel, who coordinates the Edmunds County Food Pantry, has seen a somewhat different change in the people they serve—fewer families, and more single people in the 50-60 age range. Some families are moving out of the community, and others have found a job or a better-paying job and no longer need assistance, he said. He thinks more people would probably use the food pantry if they knew about it.

The food pantry in Gackle, sponsored by the Gackle Ministerial Association, has served between 22 and 27 households regularly since it opened three years ago. That amounts to between 50 and 70 people, according to food pantry coordinator Bernie Jasken, “with the bulk of the pantry’s assistance going to those family units with children.” The food pantry receives most of the food it donates from the Great Plains Food Bank.

Pam Price, manager of the Marshall County Food Pantry, said they served about 2,220 people in a year nine years ago, when the food pantry opened. Now, they are serving about 4,000 a year.

Price said the cost of food has affected the families their food pantry serves.

“I used to get macaroni and cheese for 50 cents, and now it’s usually $1.20,” Price said. “Everything has gone up, and that makes a lot of difference.”

One new service has just started to serve hungry students in the Britton-Hecla School District. The program, called Home BASE, is modeled on the national Feeding America Backpack Program, which sends food home with students on weekends so they come back to school on Monday ready to learn.

“Students that are well-nourished are ready to learn, and we know that hunger has an impact on our community,” said Britton-Hecla elementary principal Kyla Richter, who added that the need was determined by the number of students on the school’s free or reduced lunch program. Groton students can sign up for a similar program.

Some common ideas about who these hungry people are don’t hold true for the people who serve in food pantries in our communities.

For example, some might think people who visit food pantries are too lazy to get a job. Not true, these workers say.

“One of the trends I’ve noticed more and more is that we are finding more people that are working couples,” Price said. “They are not the traditional homeless or out of work. There’s almost no one that we serve that is working age that doesn’t have some kind of a job. But one paycheck doesn’t stretch far enough, and if two people are working, daycare takes a bite out of the second check.”

Fuller said many of the people they serve are the working poor.

“Our wages tend to be lower in South Dakota,” Fuller said. “They are not expecting things for free, but the paycheck doesn’t stretch as far as it needs to. Inflation has increased over the years more so than wages.”

Another common criticism is that families become dependent on this help.

“I think that most understand that this is merely a (stop-gap) service to temporarily assist them while they get through a rough patch in their lives,” Jasken said. “Everyone, at some point in their lives, goes through a period where they find themselves in a difficult financial situation. That situation may be from a divorce, the breadwinner losing their job, a farmer experiencing a severe crop failure, dramatic and unexpected medical bills, a death in the family … the need can come from any number of sources.

“And the local food pantry is there to help ease that burden while they continue to work through their difficult situation, whatever it might be, and become re-established as a functioning, fruitful, family unit again.”

Gassen said there is probably some truth to the argument that handouts can create dependence, and some people do game the system. But that’s a small sliver of the big picture, and he would rather focus Feeding South Dakota’s energy and resources on the vast percentage of people who are in dire need of assistance.

“We need to remember that there are so many innocent victims involved in this,” Gassen said. “There are children caught up in bad situations at home who struggle or suffer because of the life they are a part of. We have a growing number of senior citizens who are trying to survive on a fixed income and struggle because of increasing prescription medicines, utilities …. They have no ability to change their economic status.”

“We all got to meet our maker one day. Those people who are abusing the system are going to have to answer to that. I don’t want to be the guy who has to answer to why I didn’t give someone food that needed it.”