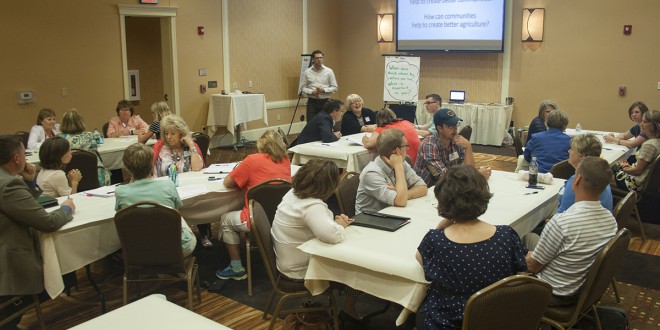 “What are you noticing about the connection between ag and community where you live?”

Participants in the Prairie Idea Exchange came from a variety of backgrounds, and they saw a variety of things happening between agriculture and communities. Here are some of the things that they noticed, plus a little deeper exploration of those ideas.

Agriculture has a significant effect on the Dakotas’ economies.

One participant pointed out that ag affects so much in the state—it’s vital for the economies of small towns, but it also has a signficant impact for Sioux Falls and other population centers. All of the inputs and equipment need for agriculture are also part of the equation.

“(If you take) ag out of the equation, there is no South Dakota,” he said, because that is the reason people settled here in the first place, and in large part it is still the reason that communities have remained here. 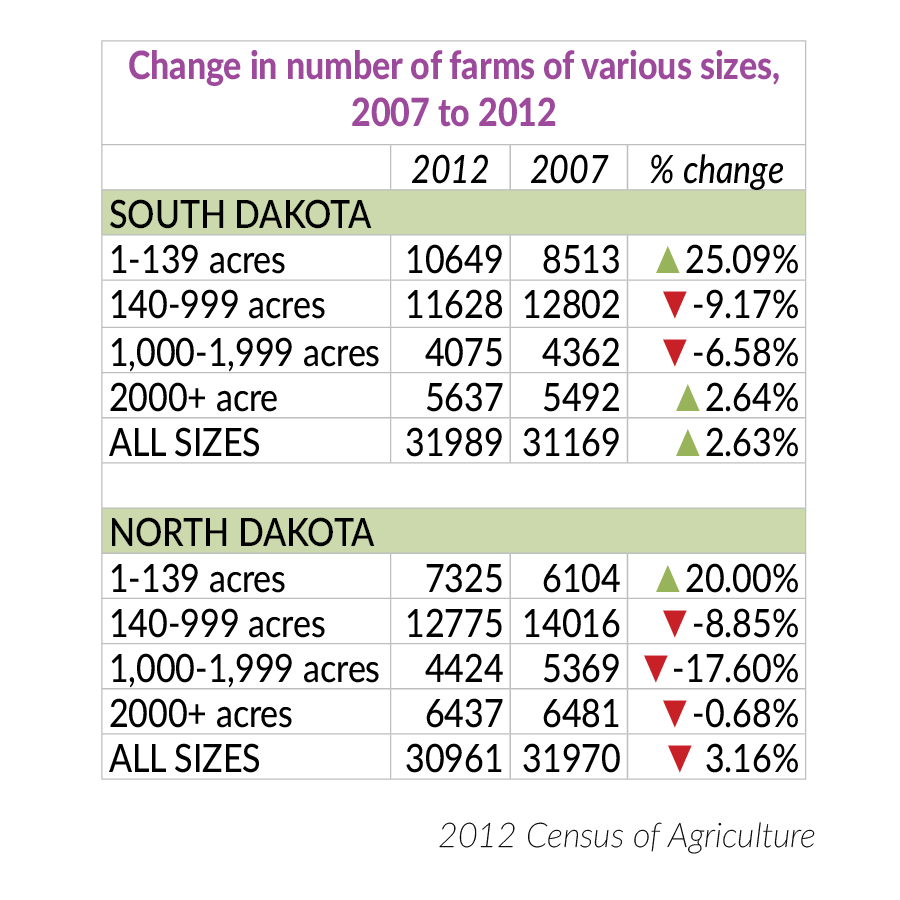 Participants described the change in agriculture on both ends of the size scale—the number of small, sometimes urban farmers is increasing, and the size of very large farms is also increasing.

What is decreasing is what has been called “the agriculture of the middle”—not small but not big farms that are operated mostly with the labor from one family.

According to the 2012 Census of Agriculture, the number of farms in South Dakota actually went up 2.63 percent since 2007—a change almost entirely brought about by an increase in small farms, those 139 acres or fewer.

Many of those smaller farms are niche producers growing or raising a product that serves a particular consumer desire, such as wineries, organic produce, pastured pork or grassfeed beef. PIE participants saw that sector of agriculture growing considerably.

Both states lost significant numbers of farms between 140 and 1,999 acres.

The size of farms makes a difference to rural communities.

“With larger corporations and bigger farms moving in, it is tough for the local, smaller operations to make it,” one participant said. “It has a direct effect on a lot of these communities. … Are both farmers and people who live in these communities shopping in the big city more because of that?”

The first issue of Dakotafire in Spring 2012 took a look at the population trend of 13 counties along the James River Valley in North and South Dakota: With just a few exceptions, the region has been been losing population since the 1930s.

In that issue, former South Dakota State Demographer Mike McCurry cited the mechanization of agriculture as one of three reasons for the outmigration of youth from the region. As machinery and other technology made farming less work, farms required less labor, and some of the youth who in previous generations worked on the farm left to make their livelihoods elsewhere. (The other two reasons McCurry gave for for the departure of youth were education and opportunity.)

Participants also noticed that many farms are in the process of being transferred to the next generation. Some farms are sold when this transfer happens; because larger farmers can afford to pay more for land, they often outbid smaller operators, which further consolidates land into fewer hands.

Participants did note that some kids are coming back to farm, despite the assumption that young people don’t want to work in agriculture.

Large farms take advantage of economies of scale and buy what they need in massive quantities. For many of these purchases, they go to larger communities or directly to suppliers to negotiate better prices. In large-scale livestock operations, many of the inputs are part of the contract with the corporation, so there is not even an option of shopping in the local community.

Small and mid-sized farms, on the other hand, are more likely to spend money in their local communities. “Farms with a gross income of $100,000 made nearly 95 percent of their expenditures locally,” according to (“A Report of the Pew Commission on Industrial Farm Animal Production: Community and Social Impacts of Concentrated Animal Feeding Operations.”). … Farms with gross incomes higher than $900,000 spent less than 20 percent locally.

When money is spent locally, it has a multiplier effect—a dollar spent at the local elevator or hardware store is more likely to be spent again at the grocery store or restaurant. In vertically integrated farming systems, those dollars go to shareholders who likely do not reside in the rural farming communities. The money leaves and does not return.

Are there ways in which large farms could spend locally?

Perhaps. But it would go against the efficiencies that made the farm operations get larger in the first place.

The size of farms can affect the social capital of communities.

From the Summer 2012 Dakotafire issue:

Since the economic ties of the community are not as strong when farms are larger, it is not really a surprise that the social ties in the community weaken with larger farm size as well. Large-scale farmers are in a constant competition with one another for more land, which can reduce neighborliness, and when farmers don’t shop locally anymore, their relationships to the small towns near their operations wither. Quite often, farmers expand into communities where they have had no historic social ties, and there is no incentive to build any.

The social capital in rural communities, or the “glue” of trust and interdependence that keeps communities connected, declines. “Numerous studies have shown lower quality of life, greater poverty and crime, lack of social services, and lowered civic participation in communities dominated by fewer larger farms as opposed to numerous small farms,” according to the Pew Commission report.

Farms are less diverse than they used to be.

Many farms that once had livestock no longer do; livestock have moved to more concentrated operations, often indoors.

This, coupled with the fact that crop prices soared a few years ago, has led to another change that participants noticed: Many acres of grasslands, once used as pasture, are being converted to cropland. One participant voiced concern over the loss of this grassland.

There is sometimes a lack of communication between farmers and the community.

“There is no communication,” one participant said. “It’s hard to have communication when you don’t even know something is happening until it’s happening. And whoever is coming in and wanting to do this facility hasn’t talked to the neighbors, hasn’t talked to anyone. And you’re feeling under the gun because you have so little resources compared to big ag.”

A lack of communication between agriculture and communities is perhaps connected to another thing that participants noticed: Town and ag folk don’t understand one another as well as they once did.

“If you’re not communicating, people assume the worst,” one participant said. “The more transparent you are, and the more you educate, the more willing people are to accept new possibilities and change their beliefs.”

What are you noticing about the connection between ag and community? Share your thoughts at www.pie4.us.

agriculture community farms PIE Prairie Idea Exchange 2015-07-02
Heidi Marttila-Losure
Share !
Previous: Postcard: Growing up in the hotel on the corner of Main
Next: 10 things you may have wondered about agriculture
Scroll To Top