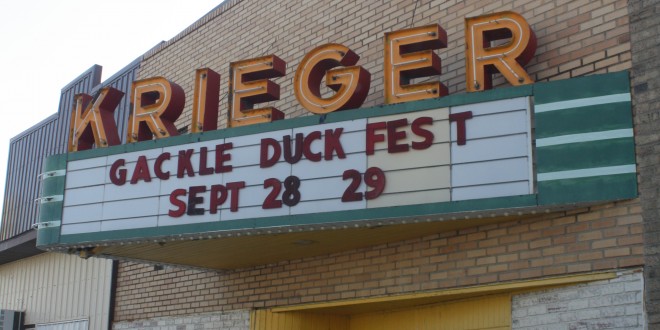 Finding money for pricey upgrade is difficult, but the only other option is going out of business

The silver screens of small Dakota towns have faced various threats to their existence over the years: Television. The decline of Main Street. Video rentals. The farm crisis.

Along the way, many small-town theaters shut their doors. Some that closed in the 1970s were re-opened more than a decade later by new owners who had community benefit more than profit in mind. Many theater owners today show movies simply so another generation can have “a place to escape reality and forget your troubles for a couple hours, experiencing sorrow and happiness, laughter and tears,” said Marchel Krieger, owner of the Krieger Theater in Gackle.

Now those theaters face another challenge. By 2014, Hollywood studios will provide movies in digital format only, and the film reel projection equipment that these theaters use will become obsolete. Switching to digital costs $65,000 to $100,000—a phenomenal sum for theaters in small towns.

“This is a dire predicament,” said Tom and Lori Farber, owners of the Strand Theatre in Britton. “Since the theatre in Britton is only open on weekends, serves a very small market, and makes no money, we and the community at large are faced with a decision. Do we buy into keeping this small town icon alive, knowing that from a ‘business sense’ this makes no sense, but from a ‘what makes a community viable’ side it hits a homerun?”

This technological crossroads has put theater owners and their communities into a soul-searching process: Is there enough support in these small towns for their movie theaters to make a leap of faith in to the digital future?

Hollywood studios have been advocating the transition to digital-format movies for at least a decade. The benefits for them are significant: Each movie printed on film and shipped to a theater costs a studio $3,000 to $4,000, while a digital version loaded onto a hard drive and shipped to a theater costs about $75. For a movie in wide release, a switch to digital will save the studios millions.

Digital formats have advantages in quality, as images look sharper and brighter. The new equipment also makes it possible to show movies in 3-D, and the theater could also show live sporting events, concerts, or conferences. A small bit of extra revenue from such events isn’t likely to be enough to pay for the upgrade, however.

The Hollywood studios have recognized that this format change benefits them more than the theaters, so they have offered to do joint financing agreements—the theaters would receive a portion of the savings that the studios have from producing copies digitally instead of on film. Even with these agreements, however, the upfront cost of buying the equipment is the responsibility of the theater.

As of this August, 3,447 out of 5,700 theaters had made the transition to digital, according to a representative of the National Association of Theatre Owners, as quoted in an article on the industry website TheWrap.com. John Fithian, president of the association, said there isn’t much more time to ponder.

About 10 to 20 percent of theaters are expected to close because of the mandate, according to industry experts.

Local theaters have responded in different ways to the digital mandate. No matter what they choose, the road ahead is a difficult one.

The end of an era 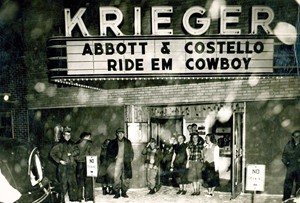 The Krieger Theater in Gackle, N.D., in its heyday. Photo by Tri-County News

In 2011, the Krieger Theater in Gackle earned the distinction of being North Dakota’s oldest privately owned theater. It owed that distinction to loyal patrons in Gackle and surrounding communities who went out of their way to support the theater in the 65 years since Albert and Fred Krieger opened it in 1946, according to an article in the Tri-County News.

Unfortunately, that title didn’t make them any more able to upgrade to digital technology. “Financially, updating the equipment is more than we can afford,” said owner Marchel Krieger. The theater, which operated in the summer only, announced in June that it would close for good.

“Thanks for the memories,” Krieger said to patrons in their closing announcement. 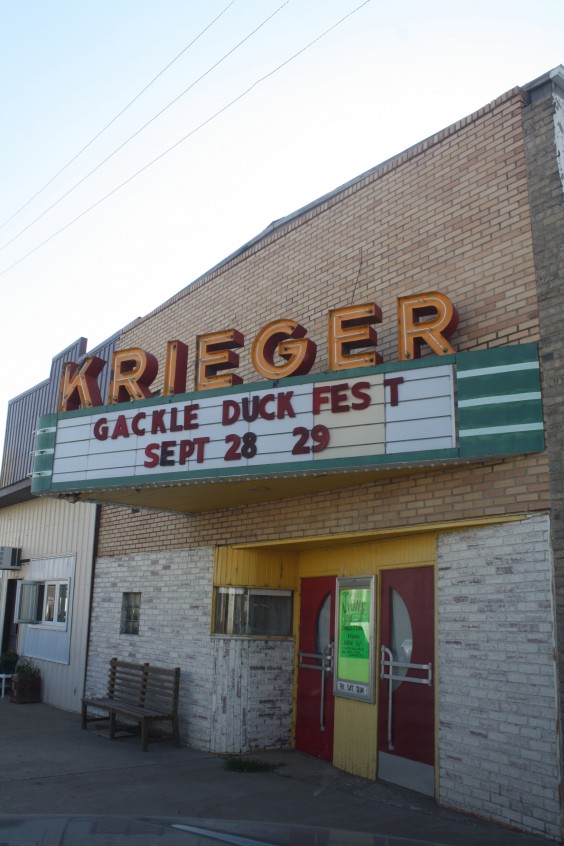 The Omega Cinema in LaMoure didn’t actually have to face the digital upgrade dilemma, but only because its managers decided to close the theater before the upgrade became an issue. LaMoure Community Development had agreed to run the theater about four years ago, when its previous owners wanted to get out of the business, according to Brad Nogosek of the development group. They lost money both years that they operated the theater. They decided to close the theater in January 2011 as a trial. No one voiced any objection, so they closed the theater permanently.

Nogosek said he thinks home theaters have changed the way people watch movies. He also said that young people are not as willing to wait for a new release to make it to the hometown theater, and instead drive to a multiplex to see it as soon as it opens.

(An informal survey of high school students supports Nogosek’s hunch. Four of six students at Madison High School said they prefer to watch a movie at home instead of in a theater. “I can sit in my pajamas and be on a couch with a blanket, and my popcorn tastes better,” one student said. “Also, I can just pause it when I need to leave. Plus, no previews.” Another student said she doesn’t go to movies in Madison “because I’d rather go to a movie theatre with more choices.”)

Nogosek added that they heard about the need to transition to digital a few months after they had made the decision to close, and realized they would have been forced to the same decision soon enough anyway.

The jury is out

Owners of The Lyric Theatre in Faulkton and the Webster Theatre have not yet decided how to proceed and did not want to speak publicly before they had made their decisions.

Both theaters have strong ties to their communities.

The Lyric Theatre celebrated 60 years in Faulkton in 2010. “If people keep coming, then we’ll keep the show running,” David Huss, son of owner Dorothy Huss, said at the theater’s birthday celebration. “It’s what dad would have wanted, and it’s what we’ll do.”

David’s father, Cyril, who built the theater with his brother Leo in 1950, died of cancer in 1995. He asked on his deathbed that Dorothy keep his dream of a theater alive. Through a force of will, personality and loyal patronage, it has been able to stay open until the present—but the Huss family is now weighing whether the cost of digital production will allow them to keep that promise to Cyril.

“Me and Val go to almost all of his movies,” said patron Danny Ramsdell. “If (Huss) were to close, I sure wouldn’t like it. They make the best popcorn of any movie theater I’ve ever been in. I’ve spent a lot of hours of my life in that theater, and I’ve got a lot of memories in there. Especially good ones from my younger days on prom and date nights when we’d be up until 2 a.m. watching scary movies. It wouldn’t be a good deal for us or for the town if it closed.”

Jackie Geiger is both a regular patron and concessions manager at the theater.

“If we were to close, I think it would be a great loss for the community,” she said. “We have a lot of patrons who I think rely on us to have that option for a night out—parents, kids and young adults alike.” 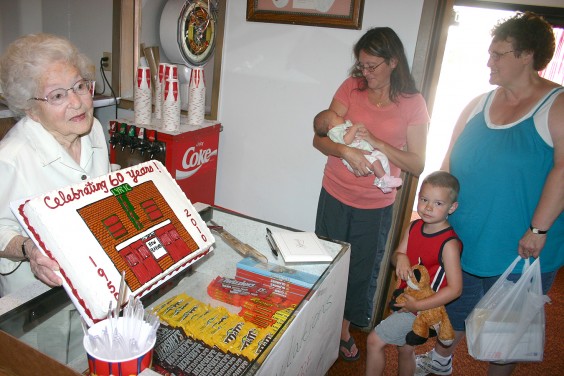 Dorothy Huss shows off the Lyric Theatreʼs 60th birthday cake in 2010. Also in the picture is Dorothyʼs granddaughter Janet Huss and her one-week-old baby, Tynlee Severson, along with Michael and Linda Demery. The Lyric Theatre has always been a large family and friends operation. More people have worked or volunteered at the Lyric over its 62-year history than can easily be quantified. Photo by Faulk County Record

The Webster Theatre (now owned and operated by  Margaret and Gary Kwasniewski, according to  webstersd.com) was closed for seven years before Judy Gaikowski put in a bid to purchase the building in the 1990s. It needed a lot of work to get it into movie-showing condition again, which the Gaikowskis provided, with generous support from the community.

“Ever since we opened, I could be walking down the street and someone would stop and greet me and say, ‘We are so thankful that you opened the theater. It has made a big difference in our community. Keep it open. We want this,’” Gaikowski said in the documentary “Small Town Silver Screen” in 2008.

Whether that will be possible in the near future is still in question.

Two area communities have committed to raising the money for new digital equipment. 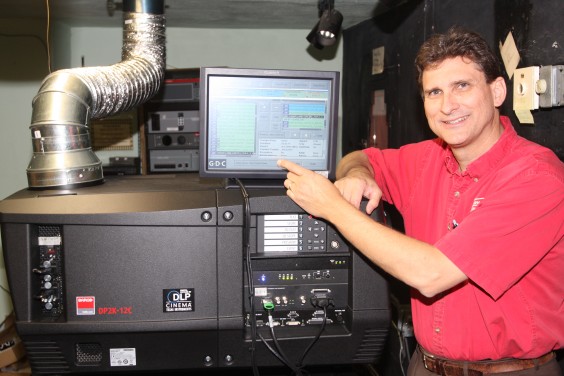 Tom Farber stands next to the new digital equipment in the Strand Theatre in Britton. Britton Journal photo

The Strand Theatre in Britton is making good progress on a fundraising campaign. As of Oct. 1, they had raised more than $65,000—nearly the $70,000-some they will need to pay for the equipment outright. The campaign has gone so well, in fact, that the new digital equipment will be installed and in working order to show off Oct. 3 when the state’s attention is on Britton as the capital for the day.

The Farbers have made many improvements to the theater since they re-opened it in 1988, such as replacing the sound system, adding fabric to the walls for sound quality and replacing the seats.

The Farbers make no money on operating the theater.

“We do it to provide what we think is a valuable service to this community, providing an entertainment choice that is much cheaper than driving out of town,” the Farbers said. “It gives our young people and citizens of all ages a night-out option that will not deplete the wallet.  Also, the fact that a community our size even has a theatre is a sign of economic health, as well showing that the community cares enough to try and keep amenities usually now found only in larger population areas.”

Bryant Cinema is also open because of the caring of its community. A group of community members raised the $30,000 to buy the theater in 1999, and for the past 13 years, volunteers in the community have put in the manpower to keep it operating.

People come for the show, then come back later to volunteer, said Jen Carstensen, secretary for Bryant Cinema Inc. “That’s a testament I think to what keeping this theater going means to them,” she said. “Working here is fun, too—it’s never boring. We have mother and daughter teams, and grandmothers and their grandkids.”

They know they need to upgrade to digital soon, and they are committed to finding a way to make that happen. “It’s more than just coming and sitting in a dark theatre enjoying a large-screen movie,” Carstensen said. “It very much is—a social event.”

A social event they hope they can keep going for generations to come.