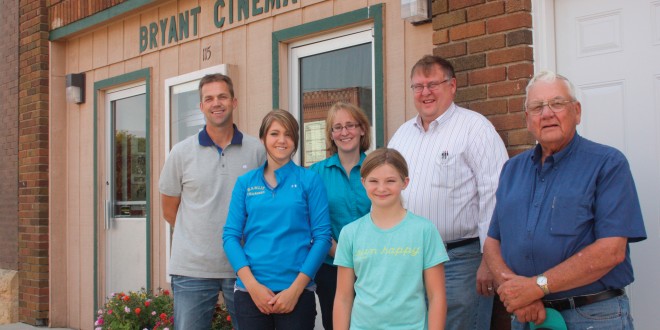 The people of Bryant, S.D., (population 452) had been going to the movies at 115 West Main Street since 1920, when the Strand Theatre (as it was called then) showed its first film: “Daddy Long Legs,” starring Mary Pickford. Admission back then was 25 cents for an evening feature.

The cinema came to be an important source of entertainment and a gathering place for friends and neighbors. Fun community traditions arose too, such as bank night and Christmas promotions. The invention of the television was a minor roadblock for the big screen, but people continued to crave the excitement and social connection at the heart of the movie theater experience.

Then, in the 1990s, soaring costs and the introduction of multiplexes began to take a toll on the small-town theater. The cinema’s owner decided to sell in 1999.

No buyer came forward. Many of the theaters that started in the Dakotas in the early part of the century had long since closed, and for a while it looked as if Bryant’s theater might join that list.

Bryant’s community members were not going to let that happen, however. Local residents, spearheaded by Melanie Gualkei getting others involved, decided they had to do something to save their theater. They started fundraising and eventually exceeded their goal of $30,000 to buy the building and projector equipment and one year’s worth of operating budget.

The community set up Bryant Cinema Inc., which has a seven-member board that meets once a month to take care of theater business. They all take turns filling the calendar with volunteer workers, which come from all walks of life and professions. Two concession workers and one ticket taker are needed each night from Friday to Sunday. Some volunteers work monthly; some prefer a schedule like working every third Friday.

Dean Steever and his wife, Jean, are volunteer ticket takers and often work together.

“Some come in earlier to get the good seats, but it seems the last ten to 15 minutes, everyone comes at once,” Dean said. “It depends on what’s going on in town, too. Home football games are busy nights in town, for example. Kid’s movies seem to bring in the most people and make for our fullest nights. Also at harvest time, when it rains out, we noticed is a bigger night for us.”

The ticket takers and the concession workers stay for the movie and often help clean up afterward.

“People say it’s nice that they can bring the whole family and not spend an arm and a leg on the tickets and concessions. We keep our prices lower and will keep it that way,” said Jen Carstensen, secretary of the Bryant Cinema board. “We draw people from all over, and some will also come back to volunteer. That’s a testament, I think, to what keeping this theater going means to them. Working here is fun, too—it’s never boring. We have mother and daughter teams and grandmothers and their grandkids.”

Claudia Currier is one of those grandmothers. “Come on you two, get to work tonight with grandma, I’ll say,” chuckles Claudia. “Everyone does the best they can, when they can to help out here. It’s such an exciting and fun thing to be a part of. We’re all busy, but if everyone gives a little of their time, it works out. We all keep it together to make it work. We have the neatest variety of movies, too. Not everyone likes the kid’s movies, so we draw different crowds with the variety.”

Claudia’s husband, Dennis, and their son, Justin, are also projectionists. Six projectionists take turns in the projection booth handling the fine art of showing the movie, all volunteers who have been trained to do the job.

The reel that Jen Carstensen is holding is how new movies come to the Bryant Cinema. They are then spliced together to make one big tape as seen on the middle spool or "platter." From there it’s threaded to the projector to show the movie. On Sunday evenings, it’s unspliced then reeled back on to the smaller reels to be sent back, and another movie is dropped off in its place. In the near future, a digital system will need to be purchased before the reels are no longer used in the movie industry. Clark County Courier photo

The movies come on several reels, ranging from three to six in a box, via Fed Ex or UPS. They then need to be spliced together on a splicing machine and put onto one of the very large reels or platters. It’s then threaded into the projector. The sound also comes on a reel played on a newer Dolby sound system. The movie is focused at the beginning, which moviegoers may notice. There are three platters the movie moves to, ending up on the middle one at the end for ease in rewinding the movie back onto the reels to be picked up and returned the next week. The movies all go back to the Technicolor company, which makes the reels, but payment for the movies goes to the various studios like Fox or Universal for the specific movies.

Bryant Cinema President Jessica Moeller works with the brokers on what movies they get, and everyone adds their suggestions.

They’ve been warned that by the end of 2013 the industry will be switching to digital. “We’re trying to get the ball rolling now to prepare for having to purchase a new digital projection system. We know it’s coming but don’t know exactly when yet,” Carstensen said. “But we’ve been warned we will need to computerize our system.”

For now, however, the old-time theater continues to show brightly colored movies on film, the old-fashioned way. And the 193 padded seats in the quaint movie theater with its blue curtains will continue to welcome its guests as it has for many, many years.

“It’s a nice atmosphere for people to come and enjoy the movie experience. We love hearing comments like, ‘Oh wow— this little theatre is really neat,’” Carstensen said. “We hear a lot of memories from former residents who come back to town for a visit or a reunion and visit the theater. They are all glad it’s still open, as are we, to make memories for our children and grandchildren.”

Bryant Cinema Inc. and its shareholders added additional space for a bigger concession stand and handicapped accessible bathrooms in 2008. A new screen and spool and platter have also been added over recent years.

“We have absolutely wonderful volunteers, which help keep us going,” Carstensen said. “Family entertainment is important to us in keeping our theater going. It’s more than just coming and sitting in a dark theater enjoying a large screen movie. It very much is a social event.”