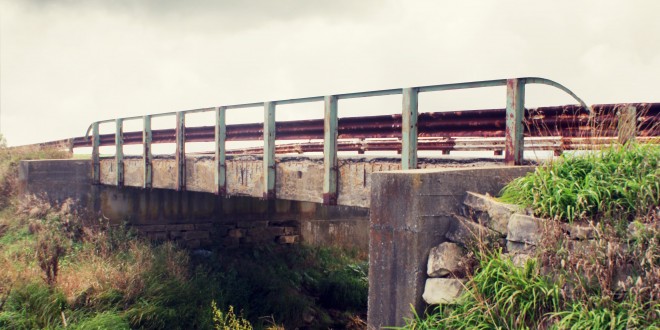 THE BIG BILL: Fix them or not, infrastructure needs are going to cost us

That’s the amount the American Society of Civil Engineers says America needs to invest in infrastructure needs by 2020. The Council on Foreign Relations, which has a research focus on Renewing America, puts the number even higher, at $2.3 trillion over the next decade.

It doesn’t really matter which one is more accurate: “All of the numbers are so gargantuan large that they’re useless when you’re trying to communicate with the public,” said Roy Kienitz, undersecretary for policy at the Department of Transportation.

Two of those problem categories, roads and wastewater, were the top two concerns listed on the report cards for both North Dakota and South Dakota.

As of 2008, 25 percent of North Dakota’s major roads and 29 percent of South Dakota’s were in poor or mediocre condition. A mild winter and a very dry summer have allowed road crews to make good progress this year, but there are years of maintenance backlogs to overcome—in 2008, the deferred maintenance and construction needs in South Dakota’s transportation system amounted to $756 million, and that was figured before the flooding damage inflicted in 2010 and 2011.

While the numbers to fix the nation’s infrastructure are “gargantuan large,” the ASCE provided some other numbers that are just as overwhelming—the amount the nation is already paying in lost productivity, delays and other costs because of declining infrastructure. In the transportation category alone, that’s $129 billion a year—and it’s likely to get worse.

“If investments in surface transportation infrastructure are not made soon, these costs are expected to grow exponentially,” the ASCE said in its report. “Within 10 years, U.S. businesses would pay an added $430 billion in transportation costs, household incomes would fall by more than $7,000, and U.S. exports will fall by $28 billion.”

And experts say the longer we wait, the more we’ll pay: Deferring maintenance on the nation’s infrastructure will result in a much larger bill later, as the prices of materials and labor tend to go up over time.

Many argue that Americans are going to be paying in any case—the question is whether there will be something to show for it after the bill comes due.

Does Investing in Infrastructure Improve the Economy?

One argument for investing in infrastructure is that the construction of roads, water systems, bridges and the like creates jobs and otherwise sparks economic activity: “A massive infrastructure program would have numerous benefits — not least of which would be giving a boost to the economy when they could use one,” says author and strategist Barry Ritholtz.

Not everyone agrees, however, which is why the American Recovery and Reinvestment Act of 2009 (also known as the stimulus bill) sparked such a debate about whether spending money on infrastructure was really a good long-term investment.

Now that economists have had some time to look at the data, they can give a fairly definitive answer: The stimulus bill reduced the unemployment rate by about 1 percent, according to Andrew Goetz, a professor at the University of Denver. Whether a 1 percent reduction in the unemployment rate was worth $800 billion and an increase in the national deficit is a relevant question.

Goetz points out, however, that this result shouldn’t necessarily cast a shadow on infrastructure spending in general.

While the numbers seemed very large to average Americans, the stimulus provided in the American Recovery and Reinvestment Act wasn’t actually that big in relation to the economy as a whole. For example, the stimulus provided $48.1 billion for transportation improvements. Compare that to the regular transportation spending Congress passed in 2005, which authorized $286 billion over four years. The stimulus didn’t even give one year’s worth of a boost over regular spending.

There is also the long-term effect of having infrastructure to consider: once things like roads, bridges, railroads and the like are in place, they set the stage for economic activity to happen. The Global Competitiveness Report for 2011-12, put out by the World Economics Forum, says infrastructure is critically important to the vitality of a nation in the global market. The report explains that infrastructure determines where and what kind of economic activity can happen in a certain region, and it can reduce the effect of distance between regions.

And without that infrastructure, economic activity can’t happen as efficiently—farmers may not have access to certain markets, for example, or, as is seen in the oil fields now, a lack of housing means needed workers can’t relocate to where the jobs are.

In the Dakotas, many of the infrastructure projects needed are more likely to be of immediate value for the quality of life of the states’ residents, such as repaired roads and improved water and sewer systems. Whether they improve the economy is less relevant to the decision-making process—as long as the lack of infrastructure isn’t throwing a wrench in the works.

Where Would the Money Come From?

The national deficit makes any discussion of additional spending difficult, no matter what the extenuating circumstances or long-term payoff. The two typical ways of increasing government budgets—borrowing or increasing taxes—are both politically unpopular.

There are some strong arguments for taking action in spite of the nation’s slow recovery from recession—or even because of it. All other factors being equal, a recession is a good time for a government to invest in infrastructure projects—it provides an immediate kick in needed jobs, and the fact that other parts of the economy are not as likely to be building means that there would be less competition for companies and resources needed to complete such projects.

Here are some possible funding sources and the pros and cons of using them:

The U.S. debt is already ticking up toward $16 trillion—that’s about $140,000 per U.S. taxpayer. This presents a great deal of reluctance to borrow.

However, considering the ASCE’s figures that Americans are already paying in other ways for deteriorating infrastructure, now would be a good time to borrow if we’re going to do it. “The interest rates on 10-year treasury bonds just hit a 220-year low,” Jordan Weismann, an editor for The Atlantic, pointed out in June. “We’re paying better rates than when George Washington was running unopposed for the presidency. When inflation is taken into account, we’re effectively getting paid by investors to hold their cash.”

Increasing taxes for national projects is not an easy sell. People in Florida don’t feel the need to pay for new roads in the Dakotas, or (if we’re honest) vice versa. The problem is that because rural areas have fewer people, infrastructure projects weigh more heavily per household in rural places than urban ones. (Easing this burden is a big part of why the Rural Development arm of the U.S. Department of Agriculture exists.)

Convincing people of the need to increase taxes is easier if they are going to use the resulting infrastructure, which is why raising use taxes has been proposed. That’s not always popular, either
—for example, the gas tax has been the same since 1993, and governmental leaders have declared its increase a political nonstarter. Use taxes can also weigh more heavily on rural people—in the case of the gas tax rural people often have no choice but to drive long distances, and higher water or sewer rates weigh more heavily on older people with fixed incomes,
of which rural places have a greater share.

In public-private partnerships, private investors put up some portion of the capital required for infrastructure projects and are paid back over time in user fees, or from the savings in state or local budgets. A number of these projects are in place in urban areas such as Massachusetts and Chicago.

Unfortunately, such partnerships don’t work as well in rural places, where the return on investment likely won’t meet investors’ requirements. It is possible that investors could be found for infrastructure projects in rural places if they viewed it in part as a philanthropic venture, accepting the idea that it would take longer than usual to recoup their investments.

President Obama put forward the idea of a national infrastructure bank that would essentially do the same thing—leverage government money to attract private investment in infrastructure improvements that would be paid back incrementally—in his jobs bill last fall, but a shrunken-down proposal for such a bank went nowhere.

At the root of this is the fact that much of the public no longer feels that giving money to the government is all that wise.

Anne Mitchell Whisnant, author of a book about the history of the massive infrastructure project that was the Blue Ridge Parkway, which is now the most visited national park in the United States, says that it probably couldn’t be built today.

“Our level of faith in the federal government [as] a doer of good for the public is nothing like it was in the ’30s,” she said in a National Public Radio interview.

How Do We Determine What Gets Done First?

This is where the national and statewide conversations such as “America 2050” and “North Dakota 2.0” come in. This lets more stakeholders have a say in what needs to be done, and if people have a say in the process, they are generally more satisfied with the result, even if their priority isn’t the final result of the group.

Some groups have put forward other suggestions for prioritizing:

Another suggestion put forward by the “America 2050” report may not be so well-received in the Dakotas. Its authors advocate for focusing infrastructure projects on eight “megaregions” in the United States, where most of the population is concentrated and most of the growth is occurring (the Northeast, the Texas Triangle, etc.). The Great Plains is not in any megaregion, and would therefore not be a funding priority for infrastructure projects, according to this way of thinking.

Jasper Schneider, director of North Dakota USDA Rural Development, says funding infrastructure in rural places is still in the national interest. “Two of the biggest bright spots in this economic recovery … are happening in places like North Dakota and South Dakota,” he said.

Middle America is a source for increased domestic energy production, both nonrenewable (shale oil) and renewable (wind power). Agriculture is a powerhouse for the economy, resulting in an approximately $80 billion trade surplus and a reliable and safe food supply. To keep these parts of the economy humming, Schneider said, “you need the nuts and bolts stuff, the infrastructure, to make these industries run, and to make sure you have supporting rural communities and supporting rural workforces—and those take resources.”

“It’s a tragedy we’re not spending more on infrastructure,” The Atlantic, June 4, 2012