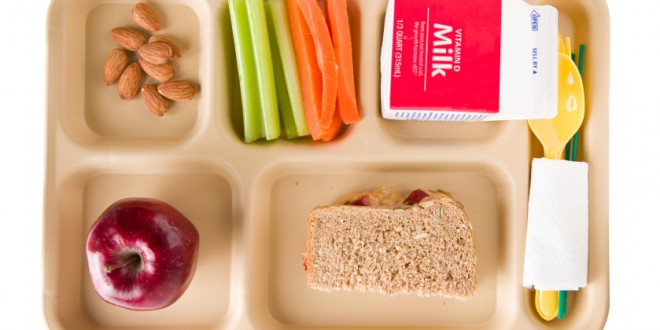 Schools are making do with leaner, meaner lunchtime rules

By Webster Reporter and Farmer September 22, 2012

School lunches, long saddled with an unhealthy reputation, are getting a makeover.

Instead of salt-doused fried foods, highly processed white bread and sugar-laden desserts, school cafeteria trays will be offering whole wheat pizza, leafy green and orange vegetables and fresh fruit—which has meant some changes for area schools to meet this challenge.

The changes, announced in January by First Lady Michelle Obama and Agriculture Secretary Tom Vilsack, mark the first major nutritional adjustment to the $11 billion school meal program in 15 years. “When we send our kids to school, we expect that they won’t be eating the kind of fatty, salty, sugary foods that we try to keep them from eating at home,” Obama said in her initial announcement.

Under the new guidelines, schools must limit calories, trans fat and sodium, while serving students a wider variety of fruit, vegetables and whole grains. Under the caloric guidelines school lunches for students in grades K-5 should get between 550- 650 calories per meal, middle schools 600-700 and high school students 750-850.

Waubay and Webster superintendents Al Stewart and Jim Block say their districts are complying to the best of their ability. “We’ve started with smaller portions and are offering less salt and more fruits and vegetables,” explained Stewart. “But we aren’t charging for second helpings due to a high percentage of free and/or reduced meal students that we have.”

Stewart said the school board took that stance after hearing from some of the older students, especially the boys in athletics, who said they were still hungry after the new (smaller portioned) lunches. “They can get seconds but it won’t be a complete meal,” Stewart said. “Overall we think a wider variety at the salad bar will make up for the smaller portions.”

Stewart noted one problem with giving free extra portions is that they must count toward the daily calorie reports.

He noted this nutritional overhaul reflects both a national trend towards a more health-conscious diet and growing concerns about childhood obesity, which affects 17 percent of the country’s youth.

“Basically they (federal officials) are telling us that everybody eats too much,” he said. “Our students need to eat more fruits and vegetables.”

The new regulations include the first increase in funding for school meals in 30 years, with schools getting an additional six cents per meal. The Waubay School Board upped its daily lunch prices 10 cents per meal, although Stewart suspects that won’t cover the added costs. “In the past we’ve had to subsidize our lunch program with general fund dollars, and we’ve told the board we will have to continue to do it,” he said.

Superintendent Jim Block said the Webster school lunch program has made some significant changes this year, too. To start with, the district raised lunch prices 25 cents a meal and breakfast 15 cents. The district has also started to charge 50 cents for second helpings, and students pay an additional charge for an extra milk. Block noted lunch prices went up mainly because the district deficit spent its food budget last year, but also to help cover the added expense of more fresh fruits and vegetables, which are cornerstones of the healthy eating initiative.

“We’ve done what we are supposed to do,” he said. “We have far more fruit and vegetable entrees. We’re tracking calories and we’ve ended unlimited meals.”

The superintendent noted that other than some misunderstandings at the start of the year the changes have been pretty well accepted. “Basically what the government has told us is that we are to provide meals to students who need them, but we aren’t to fatten them up,” he noted.

The changes haven’t resulted in an increase in brown baggers in Webster. Block noted other changes include virtually no chocolate or desserts and a scaled down salad bar that doesn’t offer potato or macaroni salads anymore.

Block said the district could have begun the healthy eating program earlier but chose to jump in this year. He said it started with a phone message to all patron families explaining there were changes to the lunch program. The updated regulations were first proposed a year ago and gave school districts the opportunity to make comments and revamp their menus. But after opposition by potato growers and food companies, Congress blocked proposed changes that would have limited starchy vegetables to two servings a week and required pizza makers to increase the amount of tomato paste to qualify as a vegetable serving. The new rules affect 32 million children and will be phased in over a three-year period.

One of the biggest challenges for schools is persuading students to try the healthier fare. Hoping to cut down on plate waste (where students throw away uneaten food), the new meal guidelines allow schools to give students the option of choosing fruits or vegetables. So far Stewart and Block say they haven’t seen a lot of plate waste but hope that through education and menu tweaks any problems will eventually resolve themselves.

In Webster the administration and kitchen staff help reinforce the new regulations with some informational signs near the lunch line. “The signs helped alleviate the perception that we weren’t communicating well with our students,” Block said.

Asked whether these changes will spell a budget supplement later on, Block said, “It’s too early to tell.” The removal of a meat requirement at breakfast should also help the nation’s school districts cut the costs of implementing the new guidelines in half, to $3.2 billion over the next five years.