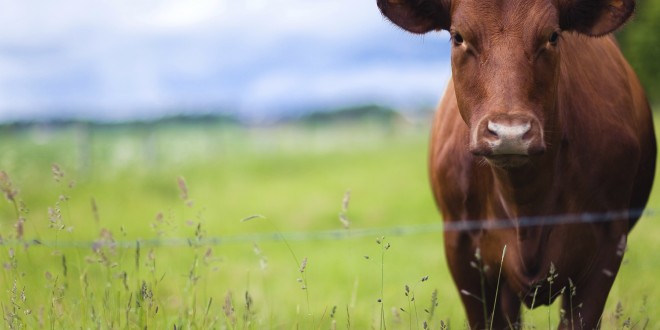 Food prices are spiking dramatically, with the Bureau of Labor Statistics reporting March’s 0.4 percent increase the sharpest rise since September 2011.

“Groceries have been going up rapidly for the last five years for sure,” Poppen said. “What used to cost me $150 I now spend closer to $300 for. We buy all our meat and we went from very little beef to chicken breasts and to big packages of pork loin. We bring it home, about 20 pounds, and cut it into slices just for the two of us and repackage and freeze.” 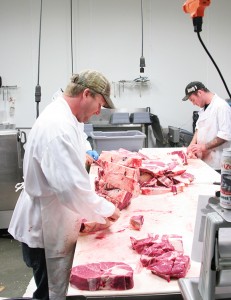 John Hartman of the Dakota Butcher in Clark, S.D., said people are still buying beef, just less of it, in the wake of high prices. Photo by Bill Krikac/Clark County Courier

John Hartman, manager of the Dakota Butcher in Clark, said people are still buying sides of beef, just not as many.

“It’s kind of comparable to gasoline,” Hartman said. “When gas prices climb really high, people still drive around, just not as much. That’s what I’m seeing in our industry. People are still eating beef. Just not as much.”

“Beef sales have slowed down with the high prices and that causes us to run more sales, and we also are trying to give more variety options to the customer, such as value-added products, and that seems to work pretty well when beef prices are high,” said Hartman.

Normally, the butcher shop would fall back to more pork sales, “but that’s high, too, right now,” he said.

Bacon and beef, two staples of the American menu, are the two fastest-rising items. Bacon’s cost has increased a sizzling 53 percent in four years, according to the BLS. The average cost in March was $5.55 per pound.

Porcine epidemic diarrhea, a virus that greatly reduced the number of baby pigs, is being blamed in part for that. The National Pork Producers Council estimates the nation’s hog supply may shrink by 10 percent this year.

Beef, especially lean and extra-lean ground beef, has jumped 35 percent in four years. As the price for live cattle, which are ready for slaughter, reaches an all-time high, ground beef sells for well over $4 a pound, and tops $5 a pound for lean beef.

These rising grocery costs are linked to drought, less land set aside for pasture and grazing land as farmers rush to plant profitable crops, and other factors. But for most people, all it means is more money for less food.

Poppen has witnessed changes in farming techniques as well. The high price of corn has persuaded farmers to change how they use their land.

Poppen, 62, said her husband Lyle rents out his land but plowed up pasture land last year to benefit his renter and to make the land more attractive to potential buyers.

“A lot of farmers over the East River area plowed up pasture to try to sell their land, as all tillable land brings more dollars per acre,” she said.

Poppen said she is aware of seeming disconnect of a concern over food prices while they plow up more land.

She said their new renter did not have cattle and had no need for pasture. Sorghum was planted, cut and baled up for cattle feed, “so we actually assisted in feeding cattle over the winter months,” she said.

“Another factor is that pasture rent is at $60 an acre for hay land while crop land is $150 an acre,” she said. “Most years our land is low and won’t be able to be planted, but by doing what we did last year we improved the quality of the grass in the pasture.”

She said larger operations, as more and more small farms disappear, swallowed up, are digging up a lot more ground.

“The thing that concerns me much more than the price of beef is the continuing removal of trees from big farmers buying old acreages and ripping out all the shelter belts to work up the land to only gain 2 more acres of land for crop land,” Poppen said. “We will one day be short of cropland and great numbers of cattle, for we can already see the upcoming of the days when this land was farmed and poor tillage and no trees, the ever horrendous Dust Bowl days.

“We see big fields blow now like we have not before in our lifetime,” she said.

Colin Duffy of Platte sees the changes from a pair of angles, as the manager of the Fort Randall Federal Credit Union and a farmhand at Mike Ringling Farms.

He said the financial realities are at the core of the issue.

“The other thing to note is that greed plays a huge role in this entire problem. Farmers are going to plant the crop that makes them money. When corn was going for $8 and more a bushel, they kept ripping and tearing up valuable range ground. This in turn spiked up prices not only for land in East River South Dakota, but the stuff out in West River has even gotten insane. I’ve heard stuff that appraises for $500 to $700 West River is going for $2,000. How the hell does anybody make that work?”

Julie Walker, an SDSU associate professor and Extension beef specialist, said the decrease in cattle numbers has several factors. “One of these would be the recent drought,” she said.

More land being converted to crop production, and the high costs of farming in general, are also major factors, she said. The October blizzard that killed thousands of head of cattle added to the pain.

Ron Frederick of the South Dakota Beef Council said that storm was a killer.

“I know the pasture/grazing land going into crop production has created a need for management changes,” Walker said. “Some producers have decreased their cattle numbers, while other producers are looking into different options for maintaining cattle numbers, which would include drylotting and residue grazing as two examples.”

Fewer farmers, and aging ones, too

Jodie Andersen, executive director of the South Dakota Cattlemen’s Association, said there is another factor to consider: Farmers are aging and many are simply not being replaced.

“I would assert that the aging population of farmers and ranchers is also playing a role, especially in South Dakota,” she said. “As the population rises, those with diversified operations are opting to sell their livestock if they are looking to slow down … especially if the next generation isn’t coming back to the operation. Even if the next generation does return, many are opting to farm rather than own livestock as risk management programs for the crop sector far exceed those available to livestock producers.”

Lastly, while the American cattle herd shrinks, fewer of the animals are going to slaughter here. More and more are being shipped East, as a rising Asian demand for beef has added to the competition for cattle. Just look at all the trade missions to Asian nations that South Dakota officials take on a regular basis.

“I don’t think the average consumer realizes that beef being sent to Japan and South Korea affects their pricing,” Duffy said.

U.S. exports of beef were up 4 percent through February, compared with a year earlier, according to the USDA Economic Research Service—a result of increasing global demand that is in general a good thing for cattle producers.

But try telling Poppen and Reitzel that as they wait for the total from a cashier.

Acres of grassland converted to cropland in South Dakota, North Dakota, Iowa, and Minnesota for the years 2008-2012