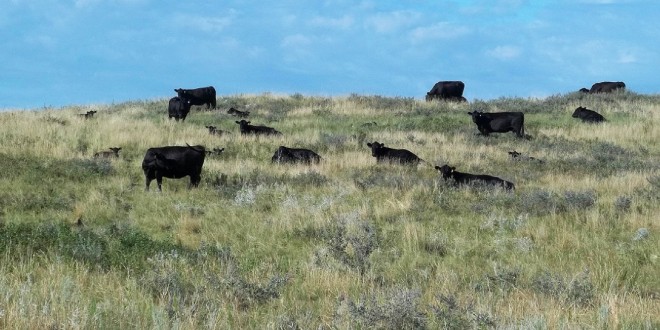 For Lyle Perman, the work of farming is intimately connected to the place in which it’s done. 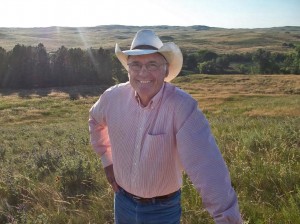 Perman’s Rock Hills Ranch straddles Swan Creek in south central Walworth County, S.D., about 45 miles south of the North Dakota border. The Missouri River’s artificial impoundment named Oahe is a dozen miles west, and through all that distance is a rolling, rangy landscape. East of the ranch the topography flattens out and opens up for 50 miles until it gets turbulent again, dropping like a gentle rapids built of bluffs and small hills before spilling into the James River lowlands.  Some of Perman’s ranchland sits at 2,000 feet above sea level. The floor of the James River valley is 1,290 or so.

As Perman nears 60 he ponders the progression of his relationship to the land.

“I wasn’t raised with the idea of ecological considerations,” he said. “My thinking started to evolve that way in the ’80s. We drained wetlands in the ’70s, and the government encouraged us to do that. Years later we restored wetlands, and the government encouraged us to do that, too. I have learned that we need to understand that there’s a lot happening on the land, and there are serious signals being sent. When bees, meadowlarks, and nighthawks are gone from the land—and in many places they are—we need to understand why they’re gone.”

It’s a big operation he’s built and learned from. These days, he confidently watches his son, Luke, at the reins of that 7,500 acre enterprise. 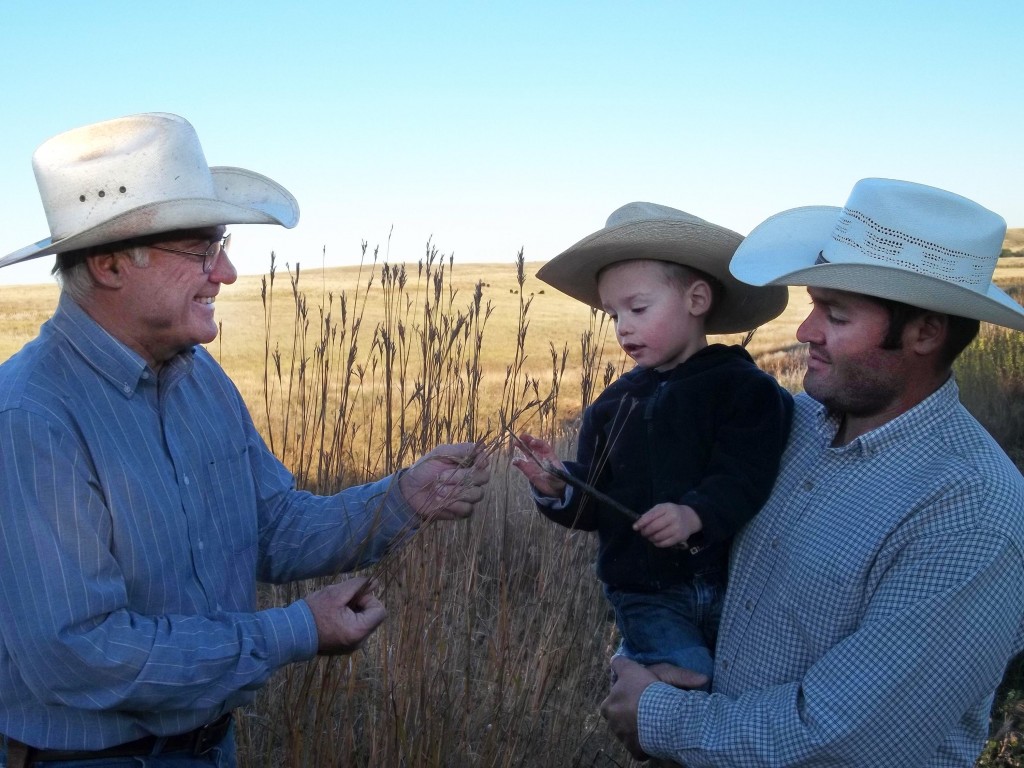 Much of the work at Rock Hills Ranch has been handed over to Lyle Perman’s son, Luke Perman, pictured at right. He’s holding a member of the next generation, Isaac, who’s getting a lesson from his grandfather Lyle.
Photo courtesy Rock Hills Ranch

“We own 3,840 acres, and the rest we rent,” Perman said.  Of that total, he added, 5,000 acres are in grass, and the Permans—Lyle, Luke, and their families—run about 450 head of Angus-based cattle on that prairie and pasture.

The nongrassy landscape is mostly growing row-cropped annuals, though the Permans have slowly but steadily restored cropland to pasture. The conversion process started in 1976, and it is now picking up steam.

The goal is to eventually manage about 6,500 acres as perennial grassland. That’s a trend—converting grain-growing ground to grassland—that is rarely found in ag country.

Perman’s unique approach to agriculture extends to how he farms. Neither he nor his son owns any modern farm equipment. The land they farm is crop-shared with a neighbor who does own big iron.

“This shows that you don’t need lots of expensive equipment to farm more than 1,000 acres, like we do,” Perman said. “If we didn’t have excellent neighbors we’d not be able to conduct grain farming like we can.”

Perman frequently uses the word “diversity” when describing the healthiest, most sustainable approach to managing agricultural land. “There’s plenty of research and common-sense study that shows that when you replace plant diversity with monoculture there is a negative effect and unintended consequences on soil health, growing conditions and wildlife,” he said. “We like diversity in our operation. We’re trying to add more and more of it to our land.”

Grassland management has evolved with this understanding, Perman explained.

“When I grew up, ranchers practiced season-long grazing, and they treated one grass just like any other. Forbs weren’t a concern. Neither were keystone species. We’ve learned to schedule grazing based on rainfall and plant growth, and we limit grazing on our grasslands to a single week or even less time. That means most of our grass rests for 51 weeks. Our grasslands have over 100 species of plants. The name of the game is good cover on the ground. That protects soils, helps the lands absorb moisture, and prevents erosion.”

“Most people,” Perman said, “wouldn’t think of planting land back to grass like we’re doing. And we’re a no-till operation, too. “

There’s also diversity in Perman’s income.  Back in the mid-1980s, when the bottom fell out of farming and ranching, he realized he needed an alternative income if he hoped to save his ranch.  “I started selling insurance and crop insurance. That saved Rock Hills Ranch.”

Lyle also realizes that the government’s farm policy and the safety net provided by crop insurance influences land use by farmers. “Consider the renewable fuels standard and crop insurance, and how they drive land use decisions,” he said. “Also consider that we have nothing like either of those in the livestock industry. That puts ranchers at a disadvantage.”

Though beef prices are decent right now, livestock growers have watched cattle numbers shrink as corn farming exploded. In 1992, the cattle inventory in South Dakota stood at 3.777 million animals. Ten years later there’d been a dip to 3.695 million. By 2012 the drop was more severe —to 3.3 million cattle and calves.

The number of livestock sale barns across the state also declined. In 1997 there were 45 sale barns in South Dakota. Today that total is 31. Economic activity and jobs related to sale barns disappeared as sale barns closed. Some small communities were especially harmed.

“The way we treat the land and the way we farm not only has a lot to do with the health of soil and water resources, it also has a lot to do with how money is spread through our rural economies,” Perman said. “As we lose diversity in our agricultural operations, we lose people from the countryside.  It’s a full-time job to run 500 cattle. It’s a part-time job to farm 500 acres. Taking animals off the land takes people off the land. But right now cows can’t compete against corn.”

Perman’s prescription for agriculture is steeped in stewardship and rural considerations.

“Agriculture needs a new compass, a new direction,” he said. “Corn and soybeans now dominate, and some instances, they’re all that’s being grown. This causes unintended consequences, such as plant disease issues, loss of wildlife habitat, and soil issues. This is not a healthy trend. It’s not healthy for the land, for rural communities, or for inhabitants of the land.”