Roads are a constant concern

The hot, dry summer that caused a multitude of other problems did have the positive side effect of providing long stretches in which road work could be done, but the damage done from water in 2010 and 2011 can’t be fixed in one season. “Hopefully people will realize that with all the damage that was done, it’s not a one-year fix. It’s probably a 10-year fix,” said Jan Weismantel, Brown County, S.D., highway superintendent, for a March Dakotafire story. 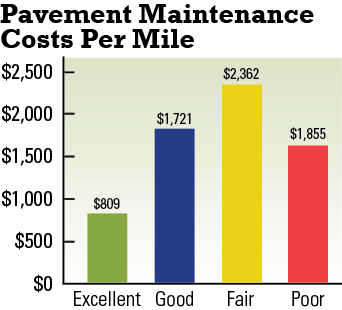 If counties ever do get caught up enough on repairs that they can focus on maintenance, they (and the public, and the county commissioners) can rest assured as they look at the highway budget that the maintenance expenses are worth the cost.

The only reason a road in poor condition costs less is because managers have given up on restoring it—which is happening with greater frequency around the country. Some counties, including Stutsman County, N.D, have converted some asphalt roads back into gravel ones. Brown County is discussing the possibility; traffic studies are being done around Brown County, S.D. to provide data for the discussion. The cost to convert the road is high, but gravel roads require cheaper maintenance in the long run.

“When [counties] had lots of money, they paved a lot of the roads and tried to make life easier for the people who lived out here,” said Stutsman County Highway Superintendent Mike Zimmerman in a Wall Street Journal story about the practice. “Now, it’s catching up to them.”

Some have tried to argue against the practice: a professor at Purdue University organized a seminar called “Back to the Stone Age” to discuss it, and a columnist on Daily Kos said that it might save money, but “it reflects poorly on us as a nation that we have abandoned our rural communities in yet another way.”