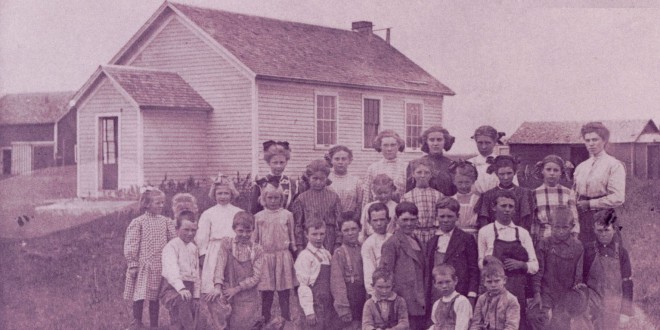 Putney Township School (1910) – one of the schools under Michael’s supervision. Photo provided by Dacotah Prairie Museum.

Putney Township School (1910) – one of the schools under M.M. Guhin’s supervision during his time as superintendent of Brown County Schools. Photo provided by Dacotah Prairie Museum.

For much of the history of the Dakotas, rural people received their early educations in the one-room schoolhouses that used to dot the countryside. Here was the place where many of our parents, grandparents and great-grandparents learned to read, write and do arithmetic, but also to help one another, to work together on common projects and to be good citizens. From those schoolhouses, they went on to serve in their professions and communities. 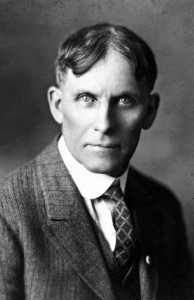 Michael Miles Guhin (1887-1941) was one individual who was instrumental in promoting that rural education system. From his days as Brown County Superintendent of Schools, through his years at the S.D. Superintendent of Public Instruction Office and on to his years of training teachers as a professor at Northern State Teachers College, Guhin always strived to improve the schools, inspire the teachers and interact with the children.

Guhin promoted a special project called the Young Citizens League, a club run by the students themselves that helped them understand that they had a part to play in their world. They learned parliamentary procedure, how to speak to groups, and how to organize and carry out an activity on their own. Loyalty and personal responsibility for their actions were encouraged.

In a publication about the Young Citizens League, Guhin wrote that the League promoted “the startling idea that CHILDREN ARE PEOPLE. It is a kind of CHALLENGE in which the children say ‘We propose to stand on our own feet, work with our own hands and think our own thoughts — and we invite the world to watch us do it.’”

Guhin believed strongly that the League provided the students with the tools to live more productive lives in the years ahead. “It is conceivable that a citizenry which has had eight years of training in self-determination may be more resistant to insidious propaganda, more loyal to oaths of office, more law-abiding, more public spirited, more patriotic and at the same time less chauvinistic, and more prone to observe common sense rules of safety first, health, sanitation, decency, and courtesy,” Guhin wrote in 1935.

Michael was also a strong advocate for the proper funding of schools. One outstanding example was the seven-page editorial he wrote in his magazine, Better Rural School Bulletin, in September 1927. That year the state legislature had drastically cut funding for education, and with it, the state aid to schools that had been in place for many years. (Sound familiar?) He deplored the fact that mismanagement and poor decisions on the state level were corrected by depleting the education budget. Whereas the tax burden for education in past years had been spread over the whole state and involved railroads, mines, public service corporations, and cities large and small, it was now being transferred to the farmers. He asked why a measure that vitally affected the farm communities of the state was passed by the legislature. He felt that it was because the farmers were not organized to protect their rights. They had no lobbyist at Pierre to look after the interests of their children. The farm communities were simply “easy marks” on which to concentrate the “economy” required to balance the budget. He urged justice for the rural children of South Dakota.

The name of M.M. Guhin, which also graced a Liberty ship named in his honor, was once well-known across the state, but memories of him have faded with the passage of time. His philosophy of the importance of rural communities, as well as the standard of excellence he expected for rural teachers and students, is still relevant today.

Emily Jessup Guhin of Aberdeen, S.D., is the author of Children Are People, a book documenting the impact that Michael Miles Guhin had on rural education, which will be published this fall. The book will be for sale at
the Dacotah Prairie Museum in Aberdeen.