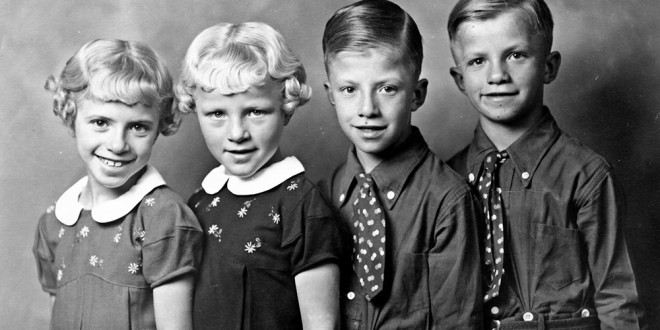 When the Fischer Quints of Aberdeen turned 50 in September 2013, the event triggered memories of another multiple birth in Brown County that occurred three decades earlier. The Schense quadruplets were born on Jan. 13, 1931, at St. Luke’s Hospital in Aberdeen.

The parents, Fred and Minnie Schense, lived on a farm six miles south of Aberdeen and already had three children: Virgil (14) Arlene (6) and Fred Jr. (4).

Before their births, Minnie had been confined to the hospital for some weeks. Having no mother at home added to the problems of the family that was described in the newspaper as “hard put to make ends meet and keep the wolf from the door.”

After learning of the birth of Jean Marie, Joan Belle, James Farrell and Jay Eugene, the people of Brown County rallied to help. The Aberdeen Evening News announced that a group of businesses and individuals had contributed funds to this hardworking, but poor family. The donor list included amounts from $10 down to 50 cents.

Dr. W.D. Farrell, who delivered the four babies, and St. Luke’s Hospital donated all the care for the mother and babies for the months they remained in the hospital. Others contributed blankets, clothing, coal and groceries. Dakota Sash and Door constructed a four-compartment crib. Gifts included a gallon of honey and a new dress for the mother. Fan mail was received from across the nation. By the beginning of February, $607 had been collected.

When her babies were only 2 years old, Minnie died of a heart attack. Ella Nelson had been hired as a household helper during Minnie’s illness. After Minnie’s death, Ella continued her care of the family, eventually marrying Fred. The family then moved to a farm 8 miles south of Hecla. Fred and Ella’s family grew when Janet, William, Edward and Roger were born.  The 11 children grew up on the farm and attended a one-room school near their home.

By 1939, due to some publicity about quadruplet sets around the U.S., new attention was focused on the children. A committee by M.M. Guhin, a Northern State University professor, was formed for another fundraising drive with a goal to finance a trip to Galveston, Texas, for a national convention of quadruplets. (There were five other sets known at that time.) About $240 was raised, but the trip was canceled and the money was banked. The committee felt its job wasn’t complete and it wanted to form a statewide educational foundation for the quads. They organized a “tag day” around South Dakota, which brought in $1,383. The group also worked toward sponsoring the education of the quads in Aberdeen, where they could receive training in music, dance and other skills. So in January 1940, 9-year-old Joan, Jean, James and Jay moved to Aberdeen where they attended third grade at Monroe School and lived with Mamie Kirley, the sister of M.M. Guhin.

During the spring, seven Aberdeen first-grade teachers under the direction of Edna Durland assembled a reading primer entitled Two and Two Make Four, featuring the quads. The 34-page book contained stories and photographs of the children in school, on a farm, at the circus and in an airplane. This publication was reported in Newsweek magazine’s Aug. 19, 1940 issue. Copies were used in the Aberdeen schools and ordered for virtually every rural school in the state. The book can be viewed in historical collections of South Dakota.

After about seven months in Aberdeen, the quads were homesick, and Fred was unhappy with the arrangements that had been made for them. So the children returned to the farm. The remaining money was put into a trust for them.

The quads led typical lives of a farm family, doing the work needed to grow crops and livestock. Their next residence was a farm near Elm Lake in Palmyra Township. The quads graduated from Frederick High School in 1949. Articles about the four children appeared in Aberdeen papers during those years, including one with photos of them in caps and gowns.

After graduation the girls, Jean and Joan, moved to Minneapolis to work and eventually marry. Jay and James continued to work on their father’s farm. In 1952 when the quads reached 21, the $1383 that was held in trust for them was distributed to the four.  The boys stated that they would use their funds to buy livestock for the family farm. Eventually Jay and James left their father’s farm. Jay of Green Bay, Wisconsin, married Rita Bauer in 1957 and had four children. James of Kalamazoo, Mich., married Helen Klimmeck in 1960 and had two daughters. Jean married Dan Russell and had a daughter. Joan married Donald Scott and had four children.

On March 31, 2003, the last of the quads, Jean Russell died in Santa Clara, Calif. Joan Scott passed away of rheumatic fever at the age of 40. James was 41 when he succumbed to a heart attack, and Jay died from a skull fracture at the age of 43. Jean, the last surviving quad, lived to be 72.

Emily Jessup Guhin of Aberdeen, S.D., is the author of Children Are People, a book documenting the impact that Michael Miles Guhin had on rural education, published in 2012. The book is for sale at the Dacotah Prairie Museum in Aberdeen.

SEND US YOUR POSTCARD