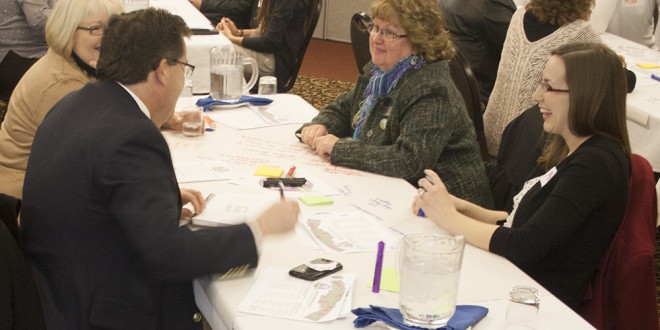 A few extra thoughts on what’s happening with rural leadership

“The local paper is filled with things that happened locally, but a lot of the things that require leadership or the issues you might want to be thinking about or the moves that we might want to do—that’s not showing up in the local paper. It’s not in the regional paper … or on the TV news. … So there’s a lack of knowledge of what the issues might be.” —Margot Gillette

“As long as each of us continue to talk and act the way we do, the next generation will perpetuate it.  I think leadership is still an exclusive club in small communities. I don’t know if it has to do with … affluence or money. But money brings time, and time gives you the opportunity to volunteer and be a leader. For everyone else it’s the daily grind … If you’re 26 and 27 years old with two kids and both are making $10 an hour, you don’t have time, really, to participate and engage and be a leader. … That’s the reality of the situation.” —Todd Kays

“We have to create space for the next generation to think and act in new ways.” —Jerry Nagel

“The fact that a majority of women now are working outside the home changes not just her role, but also her husband’s. It’s not possible for a woman to be gone from the home 40-plus hours per week, and then come home and be responsible for all of the cooking, cleaning and child rearing on her own, so her husband must chip in with at least some of those tasks to keep the home running. As a result, neither a woman nor her husband has as many hours available to devote to outside-the-home responsibilities, and they both may find it harder to assume community leadership roles.” —Wendy Royston