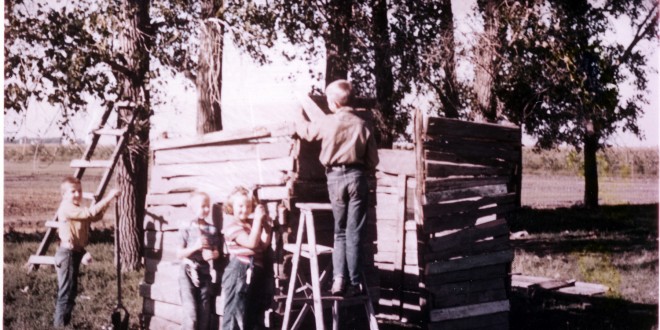 Rod Evans (on the ladder) and his siblings work on one of their “construction projects” during their childhood on the farm. Photo courtesy Rod Evans

During the homesteading boom of the 1880s, one farm in north central South Dakota was pretty much like the next, which in those days was merely a half-mile or mile away. Most farms had only one or two quarters of land and three or four buildings at most. But it didn’t take long for a few of the homesteaders to give up on the stubborn land and look for something better, and that was when farms started becoming bigger and more complex.

When Farmer Jones first filed his homestead or tree claim, all the neighbors knew exactly where the Jones homestead was, and they knew the extent of everything Farmer Jones owned. But when Farmer Smith sold out to Farmer Jones, then it wasn’t quite as easy to keep track of what was going on, or to use a common saying in a slightly different context, it wasn’t as easy to keep up with the Joneses. Sometimes neighbors couldn’t even agree on whether to call a certain piece of ground the Jones land or the Smith land, or to refer to the structures as the Smith buildings or the Jones buildings, especially if Farmer Jones moved Farmer Smith’s buildings onto the Jones homestead.

You can see how quickly matters became complicated, and it only got more so as there were fewer and fewer farmers. Two generations later, my father decided early on in his farming career that the best way to survive was to take a few risks and expand whenever possible. When a nearby quarter of land came up for sale, he’d spend some time on his calculator and then put in a competitive bid. Eventually he ended up with one of the larger farms in the area, and that meant he owned a lot of buildings as well as a lot of land.

Having grown up in the 1930s, Dad was a child of frugality. If the buildings on the newly acquired land were structurally sound, he’d take the Farmer Jones scenario to the extreme and have them all moved to our farm, and if they weren’t, Dad and my brothers and I would tear them down, pull the nails out of the lumber, sort the wood, haul it home, and store it until a use could be found for it.

Before long our farm was dotted with buildings of all shapes, sizes, and purposes. The newly acquired structures were usually used as initially intended, such as the Robinson hog house and the Wettstein granary, but Grandma’s cook car became a garage, the Robinson barn was converted into a repair shop, and the Hitchcock house was made into a granary before it was demoted to an oil room.

The building that ended up the furthest from its original intent was the old Beotia Township Post Office. It was actually more of a shack than a building by the time I was a kid, and it was too small for any constructive purpose; therefore, it was basically abandoned property. My brothers and I, however, immediately came up with an idea for its use—a smoking parlor … no, not for adults, but for my brothers and me.

How old were we? Certainly young enough to be stupid and old enough to know better, but not quite old enough to know that we shouldn’t have excluded our sister. I wonder if she started getting suspicious when we boarded up the door and windows with Dad’s precious scrap lumber, cut an entrance/exit through the roof, and made that opening accessible only by ladder. It was hard to tell because she always had that innocent look about her—the look we tried to imitate with little success.

Once we boys were on the roof with the ladder pulled up beside us, we were able to climb down into our new digs, pockets stuffed with cigarettes pilfered from our uncle’s car, free and alone, puffing away to our hearts’ content … but not for long. Our disgruntled sister headed straight for our parents and blabbed everything.

It did not go well for us. I remember that we were grounded for much of the summer, but I don’t remember for sure what happened to our Beotia Township Smoking Parlor.  I’m guessing maybe Dad accidentally backed over it with a tractor after deciding that our farm was getting just a little too big.

Rod Evans is a Speaker’s Bureau Scholar and One Book South Dakota discussion leader for the South Dakota Humanities Council, as well as an award-winning playwright and author of the book Palaces on the Prairie, which was published in 2009 by the North Dakota Institute for Regional Studies. Evans lives in Aberdeen, S.D., with his wife, Vicki.

Send us a ‘Postcard’!

In each issue of Dakotafire and regularly online at Dakotafire.net, we will feature a “Postcard”—a short, evocative story about an event, person or place, written as if you were telling the story to a friend. Some ideas: hunting stories, the highlight of a big basketball game, or a moment in history. The story must have a photo to accompany it. Digital images (a minimum of 1000 pixels wide) are preferred; you can also send a photo by mail. E-mail submissions to heidi@dakotafire.net, or mail to Dakotafire Media, Postcard Submission, PO Box 603, Frederick, SD 57441.