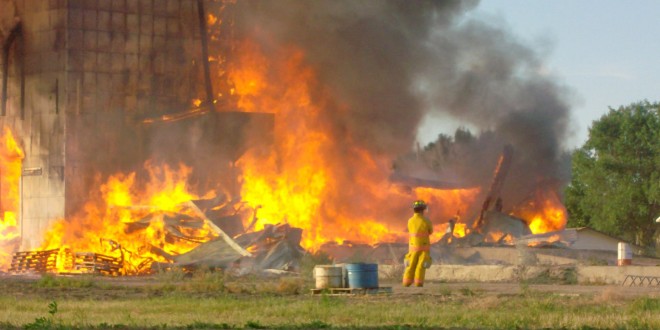 Lack of rain, crackling-dry vegetation, gusty winds and hot machinery in the field are a recipe for a busy fire season.

“It’s been a long year, what with the drought and all of the dry conditions around the state,” said Paul Merriman, South Dakota fire marshal.

Combine fires have already kept area fire departments hopping as farmers are in the field early this year. Over the course of four hours on Sept. 19, for example, three separate fires started around Warner; there were at least a dozen fires in the region that day, including a 700-acre blaze in Spink County.

Rural communities depend on having a fire department close enough to help before fire spreads and does significant damage to property or, worse, threatens lives. Unfortunately, the number of people who are willing, able and available to drop everything to fight a fire in their community is dwindling. Volunteer fire departments in the Dakotas and in much of the nation are having difficulty finding enough people to fill their ranks.

That can lead to potentially life-threatening problems. Earlier this year near Gackle, for example, a motorist called 911 because his car was on fire. He was lucky enough to be able to put the fire out himself, since no fire department was able to respond quickly, according to Gackle Fire Chief Ardell Schmidt. Another report of a house fire drew only one truck and two firefighters. Schmidt was close to the farm and also responded in his personal vehicle. With so few firefighters responding, the homeowners had to help themselves in that case as well.

Firefighters in rural communities give a variety of reasons for their dwindling numbers.

People are more likely to work elsewhere. Out-of-area jobs are the biggest reason the Clark Fire Department has more difficulty finding volunteers, according to Jeff Seefeldt, fire department president. Unlike half a century ago, when most of the people living in rural places were in some way working in agriculture, far fewer people work close to home. Even farmers, as their farms grow bigger, are less likely to be near their home communities during the workday.

This trend toward less involvement in home communities when commuting elsewhere for work doesn’t just affect volunteer fire departments. In his book “Bowling Alone,” author Robert Putnam noted that for every 10 minutes of commuting time, social capital, which is a measure of our connectedness to others and involvement in our communities, drops 10 percent.

People lead busier lives. Sometimes that’s by choice: Families with school-age children are often traveling for games or other events, for example. But it’s not always. “I don’t think the economy helps,” said John Beaner, North Marshall Fire Department Fire Chief (Britton). “More and more people are picking up a second job, and it’s harder for them to find time.” Either way, people see less room in their lives to do something extra. Beaner estimated that the time commitment for a volunteer fireman is a minimum of 10 hours per month.

More training is expected. Firefighters are not required to be trained or certified in the Dakotas, but more insurance companies are encouraging it, said Mike Eliason, an instructor of a fire certification course in the Aberdeen area. The need to seek grants for funding also affects certification—a department’s chances of getting some grants improves based on how many firefighters in the department are certified.

Also, the amount of training required to be certified has increased, according to Beaner. “Now it takes us two winters, all day, every other Saturday, just to get certification training (about 180 hours). Plus, we have two meetings a month (one business and one training) that are four hours by themselves.”

People who might volunteer to help in an emergency may be less motivated to find the additional time for training.

All of this amounts to a math problem for the departments: How can they make sure they have the 15 volunteers the state requires?

Many of the departments surveyed for this story are OK for now, with between 20 and 32 volunteers. But the demographics point toward a problem some years down the road.

“I’m not scared to go to a fire with who we have because they have a lot of experience,” said John Beaner, who has 20 people in his department in Britton. “But we don’t have a lot of young guys, with the bulk of us over 40 or better.  It’s going to be a big challenge in the future.”

Schmidt from the Gackle Fire Department has tried to encourage people who haven’t typically been volunteers to consider it.

Schmidt would like to see more young people involved, including high school students. “We have had one or two high-schoolers in the past,” he says. “But again, the numbers are low there, too.” He has also encouraged women to join the department, with only one or two coming to meetings, but not responding to fires.

The Bath Fire Department eventually had to face the fact that they weren’t going to be able to maintain 15 members. In September, they found a solution by joining the Groton Area Fire District, which allows them to collect levies from Bath Township residents to fund firefighting efforts. They can also apply for government grants to pay for better equipment. All of the Bath firefighters joined the Groton Fire Department, and the Bath fire station will stay open as a satellite to the Groton department. Bath and Groton firefighters will both respond to fires in each location.

This solution worked for Bath, but it may not be the right fit for other towns, simply because they are too far apart.

“We already have a mutual aid network and will help each other out if we are needed,” said Seefeldt from Clark. “It’s too big of an area mileage-wise. With a fire you want help as soon as possible.”

“The guys are already pressed for time, and it gets to be a big load,” Beaner said.

But most departments are available to find the funding they need, often through community support.

Shane Machtemes, assistant fire chief of the Faulkton Volunteer Fire Department, said they currently have adequate funding, but if they had more they would spent it on equipment. “We want our guys to have the best equipment that we can afford, period,” Machtemes said. “And prices for that equipment continue to rise. Just for a nozzle, you can spend between $600 and $700.”

The community of Gackle supports its department with fundraising activities, including a Fire Department Raffle. Tickets are sold for a chance to win cash prizes ranging from $40 to $400. This raises about $5,000 each year.

Clark’s department has a street dance each year as their only fundraiser. “We do pretty good on that and have donations coming in, even after our street dance,” Seefeldt said.

Most rural fire departments also get support from another segment of their community: Farmers.

The majority of fires that rural departments deal with start in fields, and area farmers are generally quick to help when they see flames nearby.

“We get a lot of help from the famers, too, who bring in water tanks to wherever the blaze happens to be, and Lord knows that we couldn’t do what we do without them,” Machtemes said.

On Oct. 5 a year ago, when it seemed that much of the region caught fire on the same windy day, firefighters credited area farmers for preventing the fires from becoming unstoppable. An Oct. 6 Aberdeen American News story about the fires featured these quotes:  “Farmers from around the area came with tractors and started to dig up the field to control the fire.” “The disc work is what saved us.” “If it wasn’t for the farmers, we would not have gotten the fire under control.”

The help of farmers is one reason area firefighters are still confident they will be able to respond when it’s required. Supportive communities and help from neighboring fire departments are also important in keeping departments viable.

Schmidt in Gackle remains positive that in the event of a serious fire, people would be there to help. The residents of the community and rural areas have offered their assistance in the past during large fires, and he feels it would happen again in a time of need.

Machtemes said much the same. “Our turnout for an emergency is usually very good,” he said. “Everybody knows everybody else, and we all work together well, with a good deal of support from all the people who live here.” 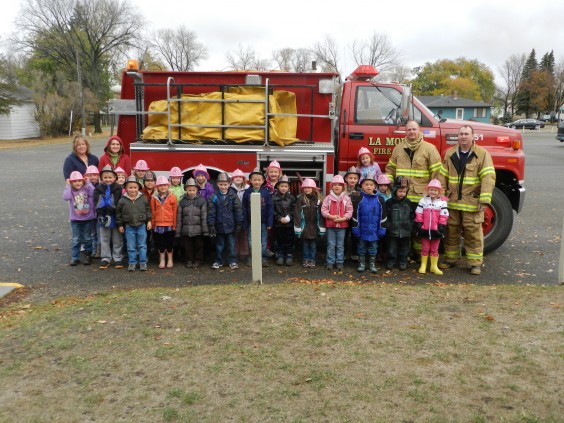 Firemen visited the LaMoure school to talk with the kindergarten class about fire prevention. Photo by LaMoure Chronicle. 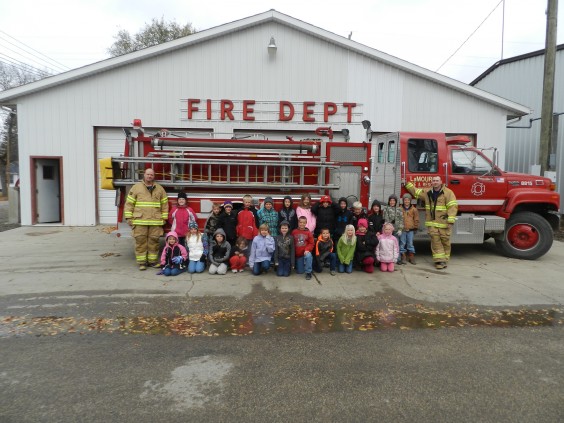 Firemen gave a tour of the fire hall to second-graders from LaMoure school during Fire Prevention Week. Photo by LaMoure Chronicle.