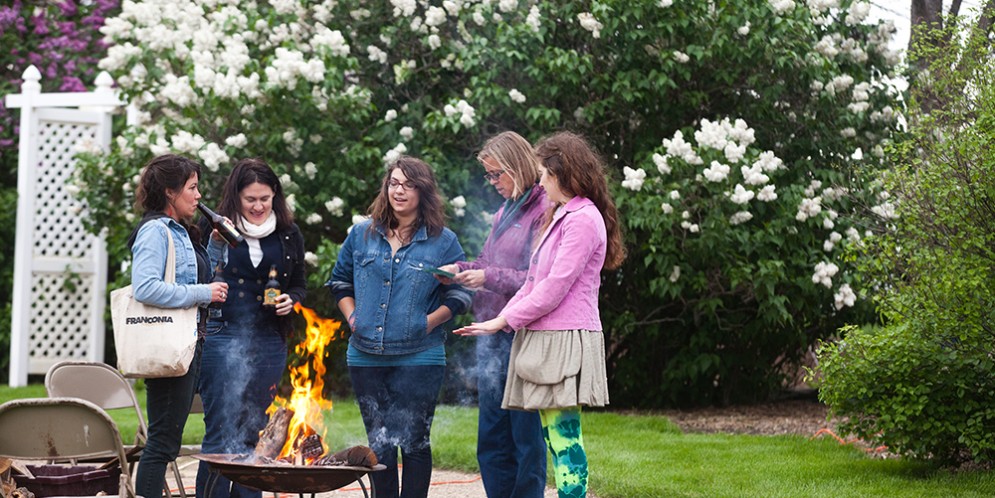 Participants gather during the Rural Art and Culture Summit in June in Morris, Minn. Photo by Holly Diestler

Land of 10,000 Art-Stopping Moments: What We Can Learn from Minnesota

In the late 1990s, the small town of Lanesboro, Minn., had a plan to build an arts center.

Visionary John Davis gave them a different idea: Let’s turn the entire town into an arts campus so that art is all around, from poetry in a parking lot to sculptural medallions along the sidewalk. The poetry would include work by local artists, and residents would vote on what should be represented in the medallions, because art should involve and be rooted in the community, Davis says.

The Lanesboro project is progressing. And by the looks of the art activity going on across the Red River, the entire state of Minnesota could well be working toward the same goal: one big arts campus, from northern lakes to southern bluffs.

Our neighbor to the east is becoming a national leader in what’s called creative placemaking, or using the power of art to redefine, reconnect and revitalize a community. Rural places especially are gaining new energy—and measurable economic activity—from art endeavors.

Lanesboro, which recently received an ArtPlace grant to work toward the arts campus vision, is just one example.

Granite Falls had a play this summer in which the audience paddled up to each riverbank scene in canoes. 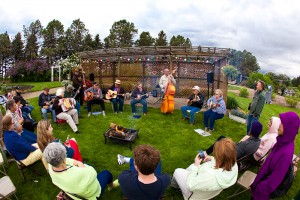 The Rural Art and Culture Summit in Morris, Minn., in June drew people from all over the region to discuss how the arts could be leveraged to create vibrant communities. One evening gathering took place outside, despite cool June temperatures. Photo by Holly Diestler

In June, many players in this creative placemaking movement came together for the Rural Arts and Culture Summit in Morris, Minn. The conference, which brought together not just artists but economic development leaders from across the region, filled up six weeks early—even after they let in more people than were initially planned.

The enthusiasm for and success in rural creative placemaking in Minnesota were clear in the stories being told on stage and around the lunch tables. “Minnesota is the real deal,” one national leader told summit organizer Michele Anderson.

So what is making Minnesota so successful?

Let’s start with the one that some Dakotans might find hard to fathom: In 2008, Minnesota voters agreed to tax themselves to support the arts.

The measure wasn’t solely for the arts. The measure’s full name was the Clean Water, Land and Legacy Amendment, and part of the money went into funds for clean water, outdoor heritage, and parks and trails. But 19.75 percent of money raised by what is commonly called the Legacy Amendment goes to the arts and culture heritage fund. And in 2008, 56 percent of Minnesotans voted the tax into law.

The tax is not massive per person—it is three-eighths of a percent in sales tax. But statewide, the Legacy Amendment has meant tens of millions of dollars for projects.

“Based on current sales tax revenue, Minnesotans will invest more than $1.2 billion in arts and cultural heritage fund projects and programs over the 25-year life of the tax,” according to the website Minnesota’s Legacy, which tracks the use of the funds.

Anderson, who helped to organize the Rural Arts and Culture Summit as part of her duties as rural program director for Springboard for the Arts, explained that the diverse interests who benefitted from the funding realized they had a stronger case in arguing for public support if they all worked together. The logo for the Legacy Amendment features the four different types of projects that will benefit from the funding.

“What that logo tells us is this is what we care about in Minnesota. This is what makes us Minnesota,” Anderson said. “These things all work together. They are all interrelated and interconnected. And so when the Legacy Amendment passed, it was this validation of the things we care about.”

This means that the effect of the amendment goes far beyond the actual dollars handed out. With that validation of winning a public vote in support of things like clean water and the arts, people felt encouraged to be more involved in those things, to be “stewards of the things they value,” Anderson said. She added that it’s been amazing to her how much this policy has completely changed the narrative in the state.

The Rural Art and Culture Summit in Morris, Minn., in June drew people from all over the region to discuss how the arts could be leveraged to create vibrant communities. Springboard for the Arts’ rural program staff, which organized the conference, are Bryce Barsness, Naomi Schliesman and Michele Anderson. Photo by Eric Santwire

The Legacy Amendment has added an exponential factor to a movement that was already growing. Many of the notable projects in the state started before the amendment passed, and not all of them have received Legacy funding, which is awarded through a competitive grant process.

Other sources of funding for the arts also provide significant impetus for creative projects.

“The philanthropy world is just really strong,” Anderson said, including the art-supporting traditions of the McKnight and Bush foundations. The U.S. Department of Agriculture has also supported many projects.

Anderson also stresses that Minnesotans have historically been good at working together—for example, in their strong history of co-ops.

Participants discuss art projects during the Rural Art and Culture Summit in June in Morris, Minn. Photo by Holly Diestler

“There is really a spirit of interdisciplinary approaches to community in general, not just the arts,” Anderson said. “Especially in small towns, leaders tend to wear a lot of different hats, so (they can be) connecting ideas and stepping to the edge of their field and finding common ground with other fields.”

And that is exactly the kind of networking that needs to happen to make projects successful, according to June Holley, a regional development pioneer and speaker at the Rural Arts and Culture Summit. She stressed that creative placemaking projects will not happen without broad networks.

“I would say one of our biggest problems is we do too much ourselves,” Holley said, “and don’t help other people do stuff that they would really like to do but they’re afraid to or they don’t know how. If we can spend more time helping others initiate and do, we’re going to have a lot better economies in our communities.”

One of the requirements of the Legacy Amendment was that projects need to generate economic activity, and University of Minnesota analyses show that they are. In the fiscal year 2012-13, for example, $24 million in arts grants generated an additional $19 million in economic activity and supported 410 full- and part-time jobs.

But perhaps the more significant achievements of creative placemaking are not monetary.

Having artists in a community means that the other products and efforts of the community are better designed and better marketed, according to Holley.

And community connections benefit. In New York Mills, for example, schoolchildren designed new banners to be hung from light posts in town. When the banners were installed, children and parents formed an impromptu parade, walking from post to post, admiring the designs the children had created. For years afterward, children in the community can point out to every visitor which design was theirs.

These are the kind of connections that creative placemaking can bring about, Anderson said.

Anderson herself shows another result of having a flourishing arts scene in a community: Young people want to live in such communities. Anderson, originally from southwestern Minnesota, was living in Portland, Ore., when she found out about the job at Springboard for the Arts, and was thrilled she could come back to Minnesota and the lively arts scene in Fergus Falls.

Other towns in Minnesota are attracting young people “because they know they can get involved and make a difference in those communities,” Anderson said.

In Minnesota’s small communities, especially with the availability of resources like the Legacy Amendment, “we can do more than just talk about it,” Anderson said. “We can actually make things happen.”

Can the Dakotas create something like Minnesota’s rural art revival?

John Davis would say yes: “My two main points are, the arts have the power to transform a community, and anything is possible,” he said at the RAC Summit.

Instead of focusing on what is missing in the community, build on what the community does have. Some resources that are already building community and connectedness through art. They are not the only ones, by any means—there would be no way to include them all—so consider this a random sampling of inspiration for creative placemaking in the Dakotas.