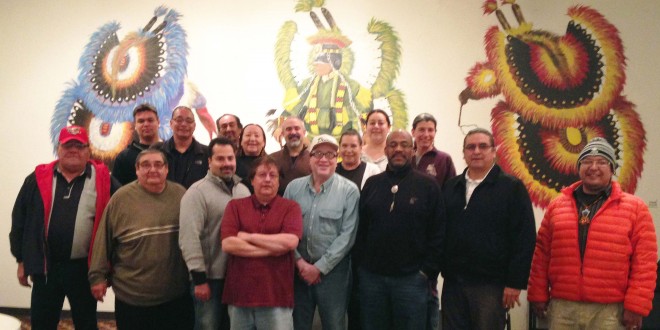 Unci Maka—or Mother Earth—is the giver of life in Lakota culture, so, naturally, protecting her is important to the Lakota people.

“If you harm the Earth, then you’re harming yourself,” said Lyle Jack, who was the development manager for the Oglala Sioux Tribe Office of Economic Development on the Pine Ridge Indian Reservation in western South Dakota until the department was defunded. “If the Earth is not doing well, then we cease to exist also. We’re all connected to each other. Whatever happens to Earth happens to us.”

A decade ago, the Oglala Sioux Tribe began exploring the idea of employing the sacred tate topa—“four winds”—to energize the Nation, both literally and figuratively.

The tribe has one energy department, the Renewable Energy Development Authority.

“It excludes any type of fossil fuels,” Jack said. “We want clean energy,” because “if you drill for oil, you cut into Mother Earth, and you harm her, and you also put out carbon, which hurts the atmosphere and the air that we breathe. It’s not meant to be used like that. Anything that harms Mother Earth is harmful to us.”

Pollution of waterways is particularly concerning to the native people, because “mni wiconi—water is life. Without water, nothing lives,” Jack said.

For years, Lakota tribes across South Dakota worked separately to come up with a plan to harness the power of the wind to bring electricity to their people. And for years, they were met with the same roadblocks.

“Our projects were too small to attract investors,” Jack said. “We had land, and we had plenty of wind, but we just kept running into financial problems and other obstacles.”

So they informally joined together as WETU, an acronym for Wind Energy Tribes United that also is the Lakota word for “spring.”

A few years ago, Jack met a Washington, D.C., attorney who suggested WETU combine resources and create a large, investor-attracting project. From that idea, the Oceti Sakowin Power Project was born. The project’s name means “the seven council fires of the Sioux Nation.” It’s the first of its kind, with the goal of creating a tribally owned power authority among the Crow Creek, Cheyenne River, Flandreau Santee, Oglala, Rosebud, Sisseton-Wahpeton, Standing Rock and Yankton Sioux tribes. The idea was presented at the 2013 Clinton Global Initiative.

“This is an amazing thing,” former President Bill Clinton said at that meeting, according to an article in b, a magazine published by the Bush Foundation. “If it works, there are a lot of other tribal lands and a lot of other tribes out there who will be able to take this and make their contribution to our country’s future.”

Wind is a gift found on ‘the worst land’

In Lakota culture, all things are circular—everyone is connected.

“Mitakuye oyasin,” Jack said. “That means, ‘We are all related,’ and that means not just the humans, but all of the birds, the four-legged animals, the fish, the rocks, the trees, the plants. We’re all related, and we have to take care of each other, because we depend on one another.”

Within Lakota culture are varying levels of human relation, all circularly connected: the tiwahe, or immediate family; the tiospaye, or extended family; and the oyate, or all Lakota people.

“We need to take care of all of our surroundings, because what happens thousands of miles away still affects us. It’s all intertwined,” Jack said. “It’s a domino effect.”

Jack said the Lakota have found a unique opportunity.

“When they first started moving tribes to the reservations, they picked the worst land that they could find, with no resources or anything, and they pushed us there. Little did they know that these lands would be some of the windiest lands in the United States,” he said, quoting a fellow Lakota man. “It’s been a long, hard search, but I think we found” the silver lining.

Project could give new life to other endeavors

The Oceti Sakowin project aims to construct wind farms on each of the eight reservations in South Dakota, to bridle the roaring Dakota prairie winds that carry enough vigor—at least one gigawatt worth—to energize all of the native land three times.

But Jack said the real “power” of this project does not lie within the massive amount of energy it is anticipated to produce.

“It’s to help us try to climb out of poverty and be in control of our own destiny, energy-wise,” he said.

The sale of energy from the wind farms is anticipated to create 75 permanent jobs, with an additional 500 jobs for construction of the project. Once revenues return to Oceti Sakowin and are divided among the tribes based on each one’s wind input to the project, each one will construct its own local wind farm.

“This one project isn’t going to pull us out (of poverty), but it’s going to give us the resources and the finances to create other projects and other economic opportunities,” Jack said.

To get started, the $3 billion Oceti Sakowin Power Project needs $15 million in seed money. Approximately $1 million has been secured through grants from the Bush Foundation and the Northwest Area Foundation.

“Without that money, we wouldn’t have been able to get as far as we have,” Jack said, adding that the project is “getting close” to reaching its initial goal. “Once we get the $15 million, that allows us to put our studies together, and then we can finally start issuing the municipal bonds that we need to raise” the remaining funds.

culture energy Own Our Energy people 2015-09-15
Wendy Royston
Share !
Previous: From the Editor: People power
Next: What if engaging youth should be supporting youth?
Scroll To Top