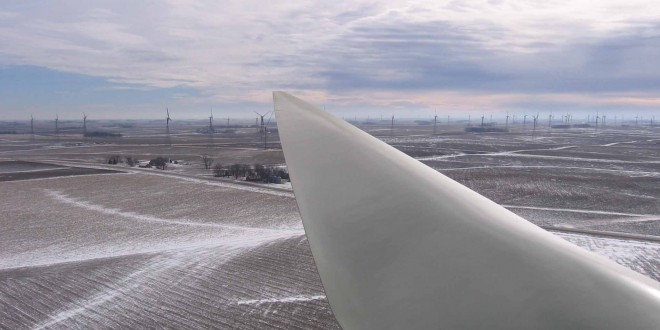 Dennis Williams captured this photo of an 80-foot blade while atop a 209-foot, 750-kilowatt wind turbine in northern Iowa. Photo courtesy Dennis Williams

Experts say it’s possible, and rural communities will benefit—if we can find the political will 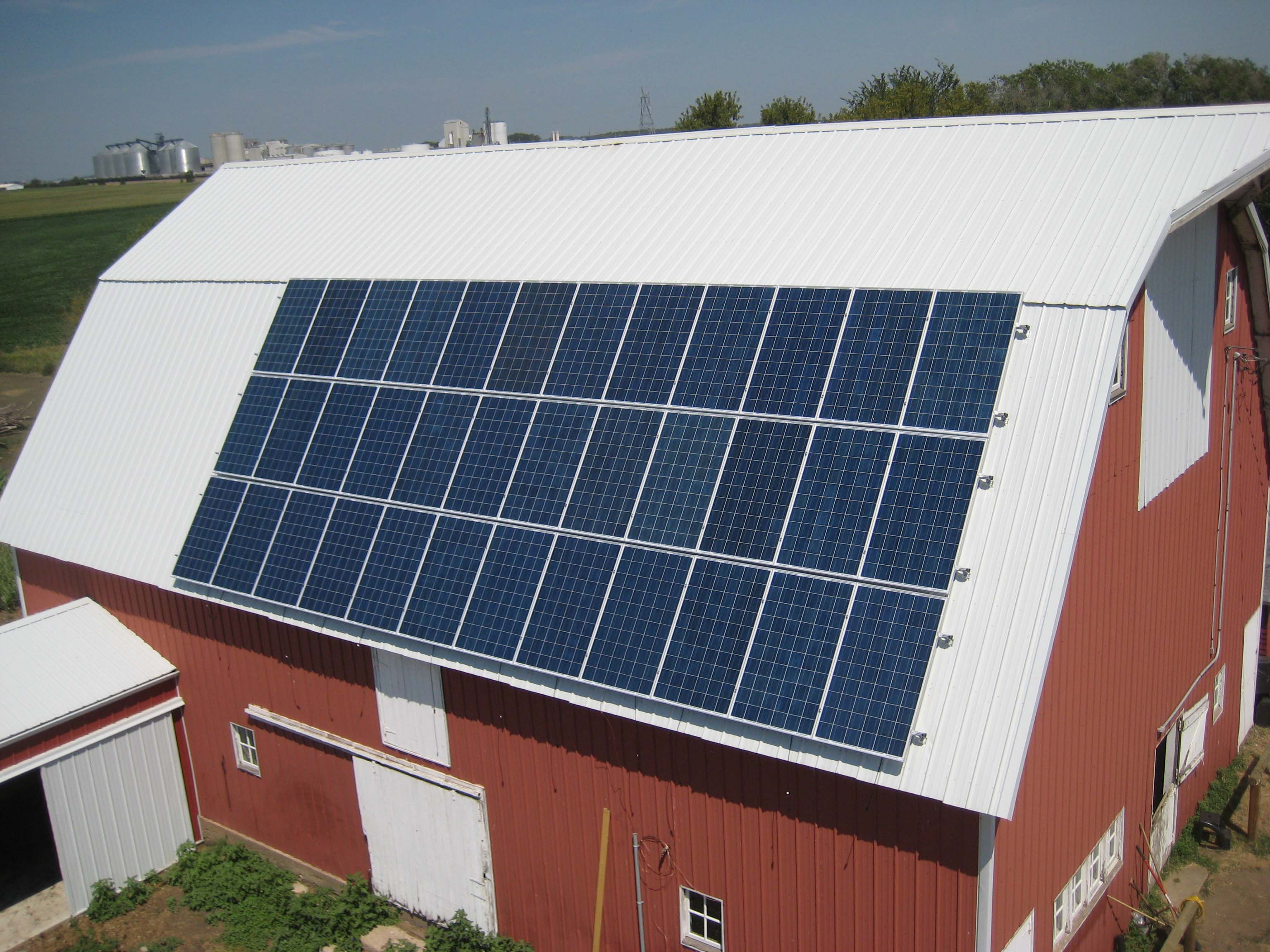 When it comes to renewable energy, the Dakotas have the raw materials: A richness of sunlight falls on Dakota ground, and an abundance of wind roars across the Dakota landscape.

Lately, energy developers have started to take notice of the Dakotas’ wealth. Wind development has increased significantly in the past decade in the Dakotas, pushing North Dakota up to 11th in the nation in installed wind capacity and South Dakota to 18th, according to the American Wind Energy Association.

Many of these new wind projects are big, both in size on the landscape and in the size of the deals that it took to build them. Large corporations, some of them based in other countries, pay landowners for the use of their land, pay property taxes to state coffers, and sometimes give some funding to local communities. The bulk of the profit, however, goes to wherever corporate headquarters is, and from there to wherever the shareholders are located.

But this isn’t the only way to do renewable energy.

Some projects across the U.S. are being built using a different model: one in which the people with the resource are full partners in the project, the energy (or at least part of it) is used by those in the local community, and the profit from the energy stays in the community.

Several renewable energy experts say that’s the kind of project that can be a game changer for rural communities.

“I think it’s very exciting times for rural America,” said Dan Juhl, CEO of Juhl Energy Inc. in Woodstock, Minn. “Small communities in rural America (can) take advantage of this technology and really secure their long-term energy future instead of relying on something we know (is) bad. … It could be a huge long-term economic value to the communities.”

The release of President Obama’s Clean Energy Plan in August made clear that fossil fuels are no longer considered the inevitable easy choice for the nation’s energy. The plan proposes cutting carbon emissions 32 percent by 2030, compared to 2005 levels. Obama said he was motivated to act because of the potential devastating effects of climate change.

“This is one of those rare issues—because of its magnitude, because of its scope—that if we don’t get it right, we might not be able to reverse, and we may not be able to adapt sufficiently. There is such a thing as being too late when it comes to climate change,” he said Aug. 3, as quoted by CNBC.

Juhl said that the list of reasons for not using coal—which provides 79 percent of North Dakota’s electricity, and 29 percent of South Dakota’s, according to the U.S. Energy Information Administration—includes more than just its carbon content.

“Obviously we needed (coal) for a time, to get through the Industrial Revolution. Hopefully, we’ve gotten smarter,” he said. “We do know all these things are bad—it’s carbon, which is climate change. Nitrogen, which is smog. It’s sulfur, which is acid rain. And it’s mercury, which is birth defects. And it’s particulates, which causes lung cancer.”

At the same time the sources for the nation’s energy are being reconsidered, so is the way in which energy is distributed and owned, according to Greg Pahl, of Weybridge, Vt., author of Power from the People: How to Organize, Finance and Launch Local Energy Projects.

Until now, the system has been based on a centralized model—energy is transmitted from big sources of power (such as dams or coal-fired power plants) over long-distance lines to where the energy is used—”very large, capital-intensive projects,” Pahl said. “That’s pretty much what we have inherited. That model is beginning to change. There is a definite trend to … distributed generation, which refers to much smaller-scale, more localized energy-generating projects.”

These projects are based on a variety of energy sources, he said, including small hydroelectric projects, wind power, or—most often—solar.

And they are most often located in rural places, according to Dennis Williams, owner of Williams Power Systems in Baltic, S.D.

“Typically, we do not have the wind resource in huge, built-up, urban environments, and property is so expensive in those environments that we can’t do large solar developments, so typically those kinds of projects get done more in rural areas,” Williams said.

The positives for rural communities first start with eliminating the ongoing cost of inputs in traditional energy generation, Juhl said.

“If you own a renewable energy-generation facility outside of town, you can make power and deliver it to your town with no fuel, no emissions, no waste, no water, and no transmission requirements,” Juhl said. “If you eliminate those things, you’re going to get long-term, low-cost energy for a long, long time. That’s a big value to these small communities.”

Locally owned energy also means rural communities are more likely to keep the power on during weather events, according Williams.

“Anytime there’s a big storm, invariably, within the city of Sioux Falls, there are a couple thousand people who are without power” for at least a few hours, Williams said. For fully electric homes, that can mean the heat is out in the winter or the sump pump is out in a torrential rain.

In that kind of centralized system, rural areas are typically the last to get power, since electrical companies must triage their outage responses.

A local system, with less distance from the power source to the user, would be less likely to be affected by a downed line miles away. And if the system is run by the community it serves, fixing local outages won’t compete for any other area for priority.

Studies have repeatedly found a greater financial benefit for local communities that own their own energy generation, compared to those whose energy resources are harvested by external companies, according to Juhl.

One of those studies was conducted by Arne Kildegaard of the University of Minnesota–Morris in 2010. The study found that community-owned wind generation had an economic impact for the state that was 3.1 to 4.5 times greater than if that wind generation was owned by a corporation from outside the community. The employment increase was 2.5 to 3.5 times greater in the community-owned model.

“All of us in rural communities spend money on power and energy,” Juhl said. “And we write a check to the utility, it goes out to the mailbox, and that money’s gone.”

Most of it, anyway—Juhl did clarify that some employment can be local in any case.

New tech has changed the game

Many of the arguments against this kind of development are false or outdated, Juhl said.

“What do you do when the sun isn’t shining and the wind’s not blowing?” is a question Juhl has heard often. The answer to that is energy storage—store energy when the getting’s good and use it when the source isn’t available.

And that leads to another argument against a system based on renewables: Critics say adequate storage is a pipe dream. A decade ago, that was true, Juhl said. No longer.

“The technology has come leaps and bounds in the last few years,” Juhl said, “and every day, it gets cheaper and more reliable.”

The driving factor is demand for electric cars. Tesla, for example, is building what it’s calling a “Gigafactory” aiming to produce batteries at significantly lower cost.

“You add storage to wind and solar, and you have firm power,” Juhl said, meaning power that is available 24 hours per day. “That’s really going to be a huge value to these small communities, because then they’ll have … long-term, cheap power that they can use to attract businesses into their town and keep those energy dollars in their community.”

A number of community-owned energy projects have been built in recent decades in other states.

“We’ve been active in Minnesota for many years,” Juhl said. “We passed net metering in 1983, and built the first wind farm in the Midwest  in Marshall.”

The fact that Minnesota has no coal, oil or gas resources has spurred development of renewables.

“We produce commercial energy that’s delivered right into town, and the city actually owns the generation,” Juhl said. “Whenever the thing is producing power, the city gets paid by the utility for the power it produces, and then a few nanoseconds later, (the city) buys the power back when they buy the power from the utility they just sold it to. Those energy dollars stay in the community.”

Pahl described a grass-roots effort to put together a commercial-scale project in his home region in Vermont that cost about $600,000.

“A lot of it is borrowed money,” Pahl said. “But the point is, it’s possible.”

The Vermont project is four years into its 10-year loans, and Pahl says the model is working—the system has produced more energy than expected most of the time.

People power is necessary, they say

Both Pahl and Juhl say that the real limiting factor to getting a community-owned project like this done is political will.

For example, utility companies typically put out bids for energy projects that are so large that no small community could gather the $400 million needed to build one. If, instead, massive projects were divided into 5-megawatt projects, smaller communities would have a chance at them.

“It’s still $10 million for that, but that’s a manageable chunk, and (there are) people out there that will fund (that size of project),” Juhl said.

There are other ways that legislators could make smaller projects more feasible, such as net metering (forcing utilities to buy energy produced on a small scale) or tax adjustments, but “you have to have a legislator willing to stand up to the big utilities,” Juhl said.

“If you have the technology and you have the commodity, you just have to have the political wherewithal to make it happen,” Juhl said. “That’s what Minnesota did. It’s starting to really bear its fruit now. We have a substantial amount of wind, substantial amount of solar, and we’re getting more and more every day. And every time we do that, the energy dollars that we would normally spend and be gone, are staying in our communities.”

Pahl suggests starting with finding grass-roots support—”a small group of local residents who support the project, who will act as the cheerleaders and the champions and will simply not give up,” he said. “And when they are faced with the inevitable hurdles and problems that these projects invariably run into, they will figure out a way to get around whatever gets in their way.

“If you don’t have that, you’re probably wasting your time,” Pahl said. “If you do, almost anything is possible.” 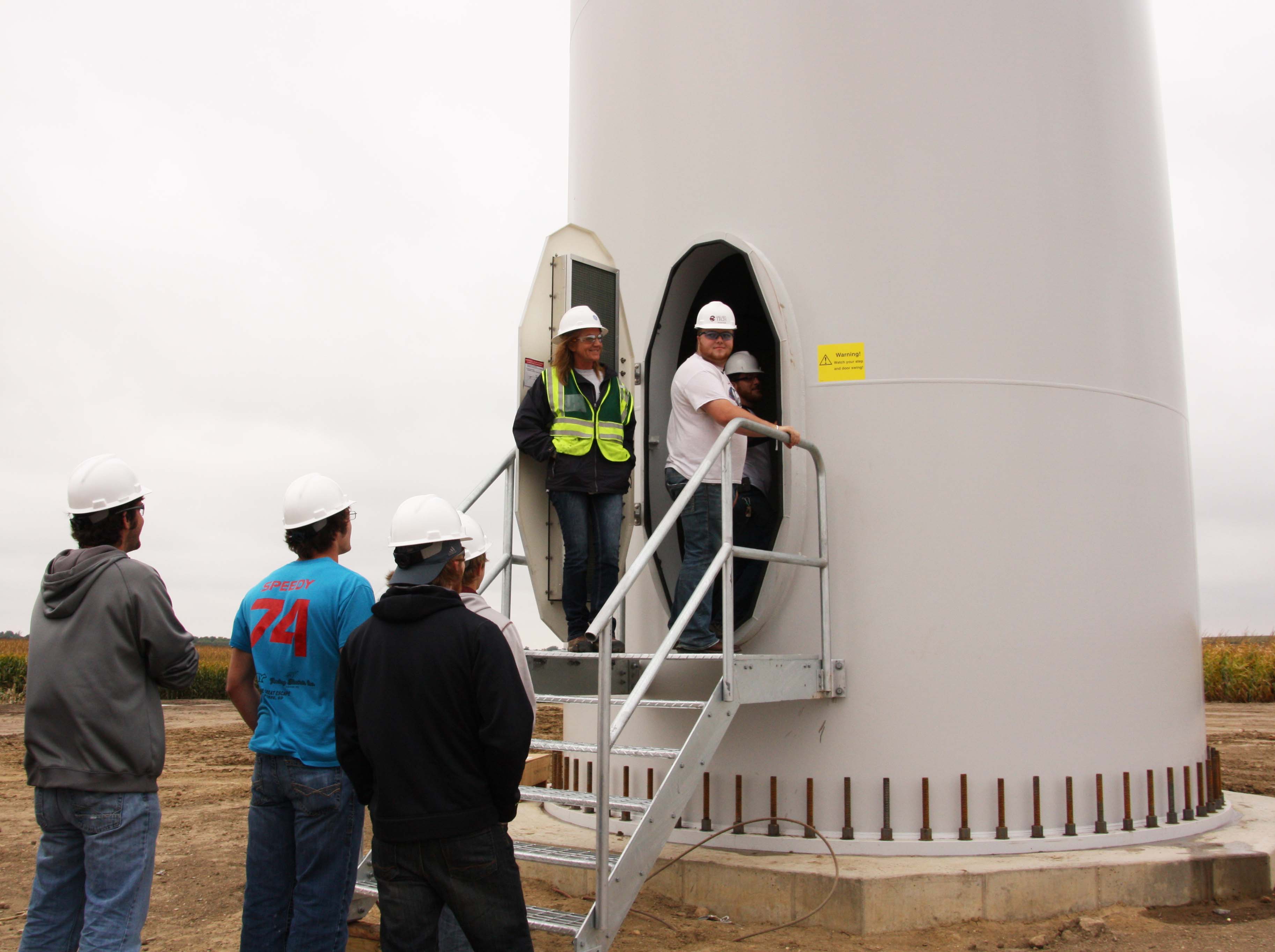 Last year, students from the class visited the Clark Wind Farm as its 11 turbines were built.
Photo by Bill Krikac/Clark County Courier

“Energy scientists” is what they like to be called—these students who are attending the Lake Area Technical School’s Energy Operations and Energy Technology classes. The program, which was developed at the request of the energy industry, teaches students how to monitor and control power, and how to isolate and identify problems in the energy production process.

communities culture education energy Own Our Energy people 2015-09-15
Wendy Royston
Share !
Previous: From the Editor: People power
Next: What if engaging youth should be supporting youth?
Scroll To Top