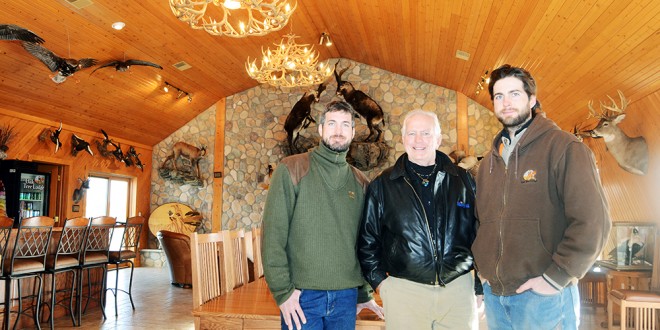 From left, Jason, Bill and Mike Makens represent the fifth and sixth generations to make a living on Oak Tree Farm. Photo by Troy McQuillen

Entrepreneurial strategy 5: Develop businesses that complement each other and the community.

From left, Jason, Bill and Mike Makens represent the fifth and sixth generations to make a living on  Oak Tree Farm. Photo by Troy McQuillen

Bill Makens starts his family’s entrepreneurship story in 1900, when two of his great-uncles (young men at the time) rode their bicycles from Sibley, Iowa, to Clark, S.D., to see if it would be a good place to settle. The report back to their parents (Makens’ great-grandparents) was apparently persuasive, as the family bought the homestead that became Oak Tree Farm in 1901.

There are more stories in Makens’ family history: One man fought in the Civil War, and another fought and died in the Battle of Little Big Horn. But most of the stories center on the land that has sustained the family for more than a century.

“We can go back and identify with five previous generations and their entrepreneurial spirit and how they kept the thing going,” Makens said. “Each generation has stepped up to the bar, and where needed people have gotten the job done to continue the dream.”

Makens’ role in the story started more recently. He grew up in Chicago and went to college in California—a “city slicker,” he admits. But he also spent his summers as a teenager on Oak Tree Farm, baling hay and otherwise getting the benefit of farm living. He also spent glorious days on the farm each October for the opener of pheasant hunting season. Many in his family would come back for the event, and they slept wherever a spare bed, sofa or cot could be found. That got him thinking.

“My dream as a kid was to be able to have a place where folks could have their own place,” Makens said, “a good meal and a nice warm chair by the fireplace, and stay dry and enjoy their friends’ company and be able to spend the weekend hunting.”

Makens was running a construction material manufacturing plant in Minnesota in 1996 when his uncle, who had the farm then, hit on some hard times and put the farm up for auction. Makens was the high bidder, paying $300 an acre. “Everyone said I paid too much for it,” he said with a laugh.

Then Makens and his family set about making his dream a reality.

The farming on the land continued, and they started making Oak Tree Farm a commercial hunting destination as well. First they converted the old farmhouse into a lodge building, which they quickly realized was not enough space, so two years later they built the main lodge. Then a few years later they doubled the room capacity of that.

Today, Oak Tree Lodge is a Cabela’s certified destination, a designation that requires a thorough vetting process—Cabela’s representatives experience all aspects of the lodge, from the food to the hunting dogs, before giving the certification.

Oak Tree Lodge welcomes visitors from all over the United States and the world.

“It’s been a real labor of love,” Makens comments. “It’s all about creating hospitality and ambiance for the folks who come to Clark to have a wonderful pheasant, duck or white tail hunting experience.”

Makens is taking their venture in a new entrepreneurial direction now: They are working with a utility company and the state of South Dakota to get a commercial wind farm on their land. Their neighbors are also involved in the venture, which would eventually have 13 towers each producing 1.5 megawatts.

The wind farm would be a good complement to the other activities at Oak Tree Lodge, and it would also benefit the region with tax money and jobs, Makens said.
Making sure Oak Tree Lodge is a good neighbor is important to Makens.

“It’s all about paying it forward,” he said. “That’s what a true entrepreneur is, somebody who gets involved in something and makes it better place to be and live in, and helps the next one in line to learn the experience and do the same thing in the future.”

He can look into the future of Oak Tree Lodge and see the land that has been in the family for 111 years is likely to stay there a good deal longer. Two sons, of his seven children, work on the farm with their families.

“It’s a treat to have the next generation all excited about it,” Makens said. “Being a family farm it tickles me that we have kids in their late 20s and 30s who have the passion.”