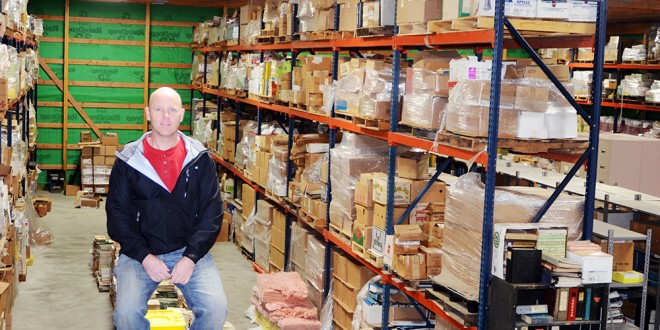 By Webster Reporter and Farmer January 8, 2013

The information superhighway has helped a Webster man turn what was once a hobby into a full-time business.

Kurt Gravley started collecting factory auto publications and car magazines over the years, and today he’s buying and selling these publications all over the world via eBay on the Internet.

Gravley started collecting as a kid but really collected large quantities in the last 15 years. He started selling online seven years ago when he realized there was a potential market out there and knew he had more inventory than he needed as a collector.

“Without the Internet there is no way to do this from this area,” he said. “Having the Internet access allows me to live here.”

Before the Internet, the people who bought and sold these publications typically did so at auto shows, often in large metro areas, where there was a market.

Gravley’s online sales started to take off about five years ago and have reached a point where he’s spending 10 hours a day at his computer and getting sold merchandise ready for shipping. “I go to the post office every day,” he said.

Kurt’s sales are usually one item at a time and go to people who are interested in a particular manual or sales brochure.

His customers are from all over the country, and he says about 15 percent of his business comes from Europe. “Some Europeans are in love with our big American cars,” he said.

Interestingly, this state isn’t a hotbed of sales for Kurt. “In the last seven years I’ve probably had 10 customers in South Dakota,” he noted.

Kurt gets some of his merchandise by word of mouth but mainly from monthly trips throughout the tri-state area. He said a lot of his finds come from car dealers who don’t hold on to printed materials once the models change each year.

“Every time I drive by a car dealership I stop in and visit with them and leave a card,” he said. “Now those stops are starting to pay off.”

Much of his merchandise has come from small-town dealerships in out-state Minnesota. He says trips to states west of here haven’t been as fruitful.

Gravley picked up a lot of items when major automakers GM and Chrysler were in financial trouble and consolidated or closed many of their small dealerships. He has hundreds of thousands of items stored in a large building at his home north of town or in storage garages around town.

Once he has new merchandise, the work really begins. Gravley has to take a digital picture of each item and write a brief description of it before listing it on eBay.

Gravley also spends part of his day on the computer monitoring sales and answering customers’ questions. “I’ll answer 10-15 questions a day,” he said.

Gravley’s Internet listings carry the flag “Buy It Now” rather than using a seven-day auction sales technique. That way the customer can get what he/she wants right away and there isn’t any haggling over prices.

Gravley said he sets his prices by monitoring the going rates and usually tries to stay a little lower than the competition. In a typical month he does 400 sales.

He says there are a lot of people selling this type of merchandise on the Internet, but there are only 15-20 major dealers in the country. Many of those are concentrated on the East and West coasts.

Believe or not, Gravley’s Internet business is seasonal. He says summer is the slowest time as people spend more time outdoors rather than in front of their computers. He also notes the three months leading up to the Christmas holiday are the busiest when people want to buy a unique gift for friends or loved ones who are car enthusiasts.

Gravley also noted that some materials, especially shop manuals, are getting harder to find because the major automakers don’t print them anymore. They now disseminate that information by computer.

“I spend a lot of time looking at the computer screen,” Gravley said. “It’s my window to the world.”