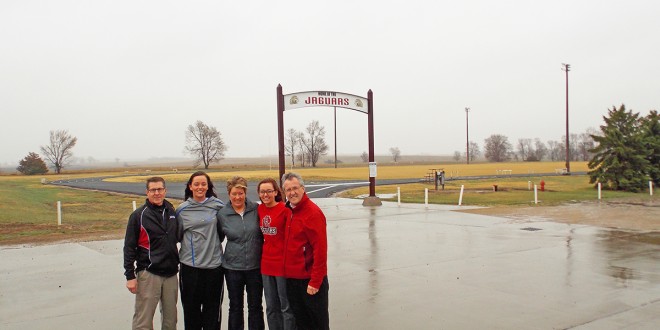 A group of Corsica track athletes, coaches and fans raised more than $50,000 to resurface the high school track, when the school district said they would only replace it if at least half of the funds were raised by members of the community. Girls’ track coach Dennis Schrank, Micayla Bamberg, Gina Schrank, Brittany Bamberg and boys’ track coach Scott Muckey were among those who raised the funds.

When the school district noticed its asphalt-topped track was deteriorating, they turned to the community, saying they would match up to $50,000 to fix it, but otherwise the school would go without. At first, no one came forward to help.

“I hated to see us lose (it). There are people who go out there … (and) run on it (and) walk on it. It is definitely used by our community,” Gina Schrank said.

Training for a half-marathon herself, Schrank said the track was becoming unsafe, so she gathered a handful of people, including some high school students and some adults, and they coordinated several fundraisers—the most successful of which was a telethon to the school’s alumni.

“The alumni really stepped up,” she said, and enough money was raised that the school not only replaced the track with a rubberized surface, but also leveled the football field and installed an underground sprinkler system. The first track meet on the new surface was held in April, and the first football game will be held in the fall.

“It’s a safe place to go out and run or walk early in the morning or late at night,” Schrank said. “It’s a very nice complex out there, for a small school.”

Community Spotlight Corsica people 2015-06-01
Wendy Royston
Share !
Previous: Where is a great Main Street, and what makes it awesome?
Next: Postcard: Growing up in the hotel on the corner of Main
Scroll To Top