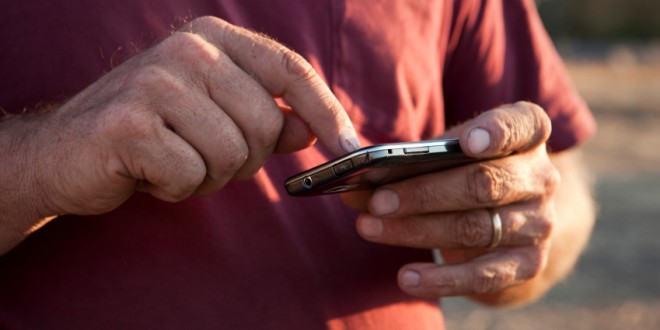 Cell phones, and increasingly smart phones, are a part of rural life

“Anymore cell phones have become essential,” says Kirk Hoefert of Seneca. “I carry (my phone) continuously either for business or for family, so that I can receive calls and texts so that I know what’s going on and who needs what.”

Nationwide, 88 percent of Americans now own a cell phone, according to a February survey by the Pew Research Center’s Internet & American Life Project, up from 83 percent in May 2011. The percentage among rural Americans is not quite as high, but it also is rising quickly: Eighty percent of rural Americans said they owned a cell phone in February, compared to 75 percent in May 2011. (Pew researcher Aaron Smith provided some of these numbers via e-mail.)

Improvements in cell phone service in many rural areas have made cell phones more useful for rural residents, and that has likely led more people to purchase them. 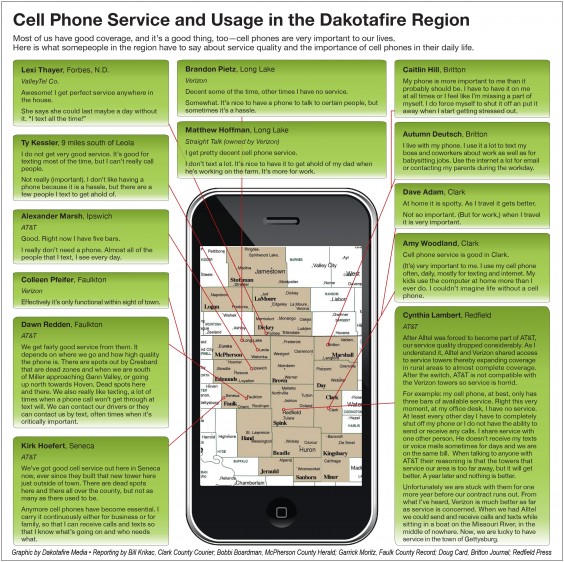 Jody Sandvig, marketing coordinator for James Valley Telecommunications, said cell phone service has improved exponentially for their customers in the past five years, though the process took some time: The company needed to build the towers, buy the spectrum and turn the service on in the area they serve (in Brown and surrounding counties). When they reached a community in that area, flipping the switch to provide service made a noticeable difference in daily life.

“In the Frederick school system, they didn’t have a cell phone policy until we turned on our service,” Sandvig said. “Then they had to create one—students now had cell phone service in the building.”

Not everyone in the rural Dakotas is enjoying great service, however. Cynthia Lambert, editor of the Redfield Press, said their service has declined significantly since the AT&T-Alltel merger last year.

“As I understand it, Alltel and Verizon shared access to service towers, thereby expanding coverage in rural areas to almost complete coverage,” Lambert wrote in an e-mail. “After the switch, AT&T is not compatible with the Verizon towers, so service is horrid.”

Bill Meyer of Meyer Hardware in Britton, which sells phones and satellite dishes, said he’s noticed a big influx of Verizon customers from AT&T because of lack of coverage.

Service can vary, however—Meyer said one of his employees has AT&T and is happy with her service.

“There are always pockets where AT&T is better,” said Meyer. “It’s an imperfect world, and the sooner you understand that the better off you are.  The fact of the matter is that we live in a rural area and it’s never going to be as good as in the city. A million-dollar tower for 800 people just doesn’t make any sense.”

Smart phones provide a whole new level of information to rural users. For example, farmers can use their phones to check market prices or to calculate loan rates. Truckers can use a phone’s GPS to help them chart their routes. And a whole world of apps is available for specialty uses.

Rural areas without good mobile broadband service are at a disadvantage when recruiting businesses, or as existing businesses try to compete in the larger marketplace, according to an October 2011 white paper entitled, “Achieving Rural Universal Service in a Broadband Era: Emergent Evidence from the Evolution of Telephone Demand” by Jeffrey T. Macher and John W. Mayo.

By the same token, businesses in rural areas that have access to broadband service can narrow the gap that has normally existed between rural and urban businesses. The paper’s authors describe it as a “‘lubricant’ that facilitates the flow of society’s stock of knowledge to firms.”

They also found that demand for wireless access to the Internet (via cell phone networks) is higher in rural states than in urban ones.

Sandvig, from James Valley, said that the industry is moving toward better service for data transmission in addition to voice, and they as a company will be working toward that as well—but she said that like most information trends, it will start in urban areas first.

Want to look at what people are saying about cell phone reception in your area? Want to log a complaint? Go to http://www.cellreception.com/ and put in your zipcode.