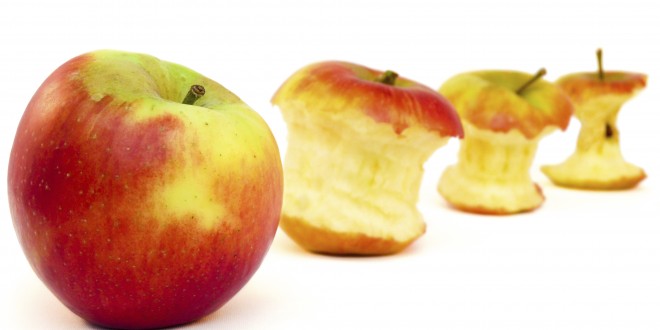 Knowledge about Common Core not so common

As Common Core standards started going into effect in Dakota classrooms this fall, state education leaders probably expected to spend some time explaining what the standards are.

But Ryan Townsend, director of academic standards for the N.D. Department of Public Instruction, said he’s spent a lot of time lately explaining what the standards are not.

The standards had strong support from many corners until this fall, when educators started hearing a lot of pushback, according to Townsend.

“A lot of it is based on misinformation, unfortunately,” he said.

He’s had to combat a lot of myths: No, there’s no mandate in the standards to teach sex education in kindergarten. No, the Qur’an is not a mandatory text, and the Bible is not banned. No, the standards are not mandated by the federal government.

“I’m really glad people are calling,” he said. “When they call, I get a chance to talk to them. I can explain why the Common Core is so important.”

A Gallup Poll released in August suggested that most Americans aren’t getting reliable information about the Common Core standards. In fact, 62 percent of Americans had never heard of it.

And of those who had heard of it, many had key facts about it wrong (for example, many thought—incorrectly—the federal government requires states to adopt the standards).

Even after the misinformation about the Common Core is cleared away, debate about its purpose and how to implement it remains. Here’s an overview of what’s happening and what’s at stake.

The Common Core standards began from conversations that state education leaders and governors were having about their schools in the late 2000s. First, it was clear that U.S. students were not doing well compared to students in other countries, and years of reform and effort hadn’t moved the needle much.

Second, because each state had different standards, what the typical high school graduate knew when going on to college or into the work force varied greatly.

The results of 2012 ACT scores “show alarming gaps between the knowledge and skills needed to earn a diploma and the knowledge and skills to actually be prepared for education and training after high school,” according to a PowerPoint presentation given out by the nonprofit group Achieve the Core, whose founders were involved in writing the Common Core standards. High rates of remediation, including at Dakota colleges, result from that.

Third, these different standards are especially difficult for children who move from one state to another. About 13 percent of children move across state lines each year, according to the National Center for Education Statistics, and those children are likely to be from low-income, military or immigrant families. “Many of them lose their place in the educational order and never recover,” writes Bill Keller in the New York Times.

This is part of the reasoning that prompted the states, along with teachers and experts, to work together to form new standards.

The federal government had no role in the standards’ development and did not mandate their adoption.

There were some “carrots” from the federal level that might have encouraged states to adopt the Common Core: The Race to the Top initiative, which was from the federal level, encouraged states to develop higher standards as part of the competition for more funding. Some states applied for waivers to the No Child Left Behind requirements, which were more likely to be granted if states raised their standards. But neither of these programs was mandatory, and neither required that the higher standards be the Common Core Standards.

The goals, and how to reach them

Some of the critiques of Common Core have centered on the idea of standards in general. The pro side argues that standards allow everyone to know the same thing when they graduate from high school. The con side is that standards force everyone (no matter their beliefs, plans after high school, or ability level) to be taught the same thing. In a nation that prizes freedom and individualism, that doesn’t always go over well.

Townsend explained that there is a clear difference between “standards”—what a student is expected to know at a certain point in his or her education—and “curriculum”—the methods a teacher uses to make sure a student gets to that standard.

Forty-five states have now agreed to use the Common Core Standards, but the curriculum (including what textbooks to use) is still decided at the local level.

Townsend said that for years, states have had their own standards, with curriculum decided at the local level, and the Common Core doesn’t change that structure. The big change here is that all these states now have agreed on the same standards, he said.

The tools that schools have always used to help students that are learning either above or below their grade level will still be available.

“It is vital to remember that the Common Core State Standards are a floor, not a ceiling,” North Dakota State Superintendent Kirsten Baesler said. “Students can be accelerated and schools can offer supplemental learning.”

Another myth about Common Core is that it means more testing. Townsend said no additional testing is required, although schools may decide to do more testing so they have better data on how the changes are working.

According to Achieve the Core, “fewer, clearer, higher” was the catchphrase used by the group that worked to develop the standards:

Aiming for “fewer” was key in making the higher standards possible, according to Achieve the Core.

“Rarely in education do we pay so much attention to the limited resource of time,” according to the Achieve the Core presentation. “We often, rather, keep adding and adding initiatives.”

Instead, these standards used “the power of the eraser” to clear space for higher standards and deeper learning.

Achieving that depth of knowledge requires some adjustments for teachers, who attended training sessions to get ready for the change.

“The instructional strategies that teachers will need to use in the classroom will change to teach Common Core Standards,” according to Tami Kramlich, principal of Kulm Elementary School. “The idea of teachers standing in front of the classroom and lecturing will have to change. We need to quit giving kids answers and start giving them problems to solve.”

The idea is that students will develop higher order thinking skills better by attempting to find a solution themselves—even if that means some frustration at first because they haven’t been instructed in how to figure out the answer.

“Teachers are teaching more than just facts,” said Lori Wagner, a math teacher at Webster Area School. “They’re teaching to get kids to do deeper thinking both inside and outside the box. It’s a shift away from memorization to a focus on problem solving.” 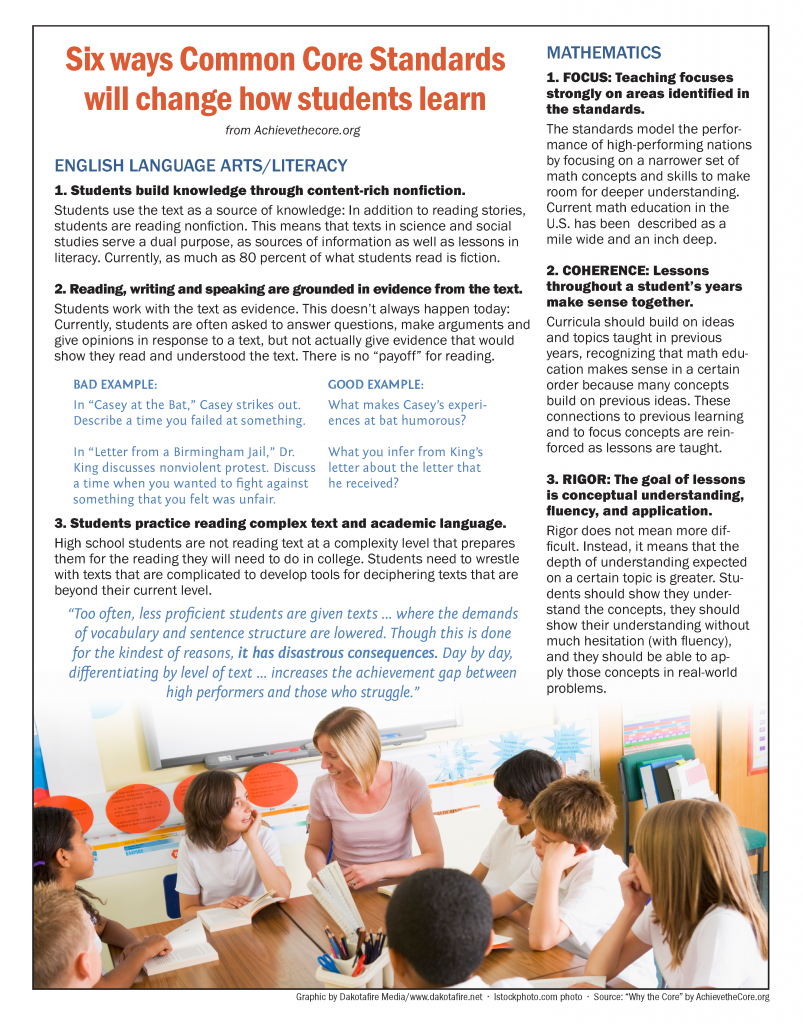 Transitioning to this new system presents challenges for everyone in the classroom, according to Joel Price, superintendent of the Faulkton School District.

“There is a large learning curve for staff and students,” Price said. “They are right in the midst of it, and as such there are always issues that arise. They are being addressed through discussions among staff members and administrators about methodology, pedagogy, assessments and curriculum choices.”

Tom Nitchke, superintendent of the Kulm School District, said the transition has been harder for older students.

“High school just started the transition this summer, and it’s been harder for them,” Nitchke said. “Our eighth-graders are taking algebra and have been complaining. Our seventh-graders had to be backed up far into elementary school level math because they didn’t have the fundamentals. But I applaud these teachers for not just letting them slide through and instead doing the work themselves, and making the kids do the work, to get them up to standards.”

Some parents have also had concerns with the new standards.

“My 7-year-old tested advanced in everything before CCS, and now is falling behind in math, and I was not provided enough information to be able to help her,” said Samantha Mahin of Kulm. “We, as parents, had a very poor introduction to CCS, and that is the most insulting part of how it has been rolled out.”

The national Gallup poll mentioned earlier suggests Mahin wasn’t the only one who didn’t get much information before school started this fall: 55 percent of public school parents had never heard of Common Core. This is perhaps because school districts were still learning themselves. With fall parent-teacher conferences happening in many schools now, there’s an opportunity for parents to learn more about how the standards are affecting their children’s education.

“It’s just a standard that we have to hit at the end of the year, but we’ll get there the way we always have,” Nitchke said.

“This is nothing parents need to be afraid of,” she said. “At first parents may see their kids struggle with this, but students do learn from failure. They learn what doesn’t work and then find out what does.”