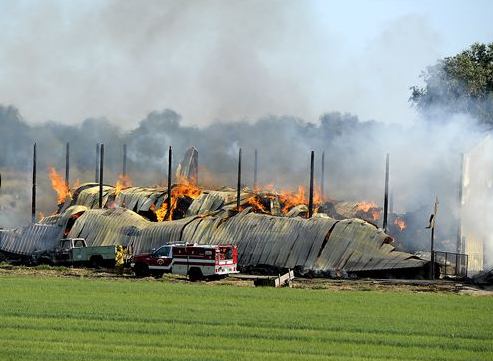 A barn fire, from horseandman.com

FIRED UP: The rural facts we used to know

The photo above is from horseandman.com and depicts a barn that held hay that the blog author was intending to purchase. This fire wasn’t caused by combustion, but many such fires are.

The Rural Blog highlighted this feature from HorseandMan.com about why hay can spontaneously combust. What I was surprised to see was that this was presented as information that most people don’t know:

The key to the fire is — surprisingly — moisture. According to Lester Vough, a forage crop extension specialist at the University of Maryland, hay that is “too wet from rain or dew or that was not allowed to dry sufficiently in the field will go through a curing process (sometimes referred to as a sweat) in storage. During the curing process, heat is produced. This heat buildup is caused from live plant tissue respiration coupled with bacteria and mold activity…”

It was once common knowledge that storing hay (or grain) wet was a problem, both because it could spoil and because it could combust. Hence the saying “making hay while the sun shines,” since it was far better to work hard in the hayfield while the sun was shining rather than trying to deal with drying or storing wet hay. (Though I think fewer people say that than they used to, also.)

Apparently, this is another example of the kind of knowledge that is being, or has already been, lost as the general population moves away from any connection to agriculture. The main story in the farm issue of Dakotafire, just out this week, touches on this topic in its discussion of the side effects of the loss of the agriculture of the middle — the farms that are more than hobby farms but are not completely vertically integrated. See the section titled “Small and Mid-Sized Farmers Preserve Wisdom of Specific Places.”

This loss of information can be dangerous, as shown by the example given in the Horse & Man blog entry that these fires have burned down barns and killed the horses inside them. The loss of connection can be dangerous even if people are not doing anything directly connected to agriculture — it is difficult, for example, to judge whether the agricultural practices that put food on our table are acceptable to our health and to the future use of the land if we have no knowledge basis for comparison. If we are ignorant, the risk is there that someone will profit from our ignorance, to our detriment.

fire hay horse knowledge rural spontaneous combustion storing hay The Rural Blog 2012-07-13
Heidi Marttila-Losure
Share !
Previous: FIRED UP: Get in on the discussion about rural issues at Let’s Talk Rural Futures
Next: What brought you back to your rural roots?
Scroll To Top