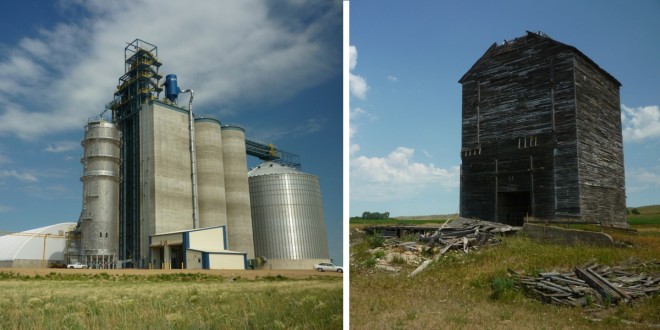 The new South Dakota Wheat Growers facility in Andover, and a long-abandoned grain elevator in Crandall. Photos by Chris Laingen

FIRED UP: Where farmers bring their harvest, then and now

Chris Laingen, an assistant professor of geography at Eastern Illinois University who is working on creating an updated delineation of the Corn Belt, was in South Dakota a few weeks ago and snapped these pictures on his tour. They give a bit of a perspective on how much agriculture has changed in the 123 years South Dakota has been a state. 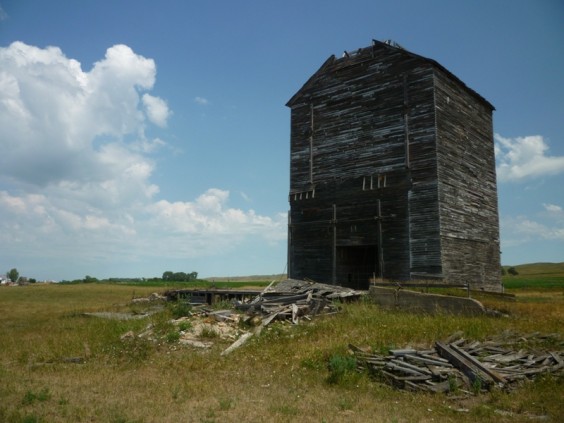 The grain elevator in Crandall, S.D., was made of wood and, by the looks of it, has been long abandoned.

Laingen had a theory on what happened in Crandall:

When we were in Crandall we saw a sign that said the town … was established in 1907 — pretty late for that part of South Dakota I think — so that might have something to do with the town itself (and its elevator) not having a very long or prosperous life.  Someone maybe thought, “Hey, we could establish a new town and elevator here”… but by then the surrounding communities had already been established long enough that the elevator in Crandall wasn’t needed — and neither was the town — and soon after the railroad there was abandoned, so was everything else.

Though I’m no expert in the settlement history of SD, that’s my guess.

Readers, anyone out there have some knowledge of Crandall’s story? Comment below! 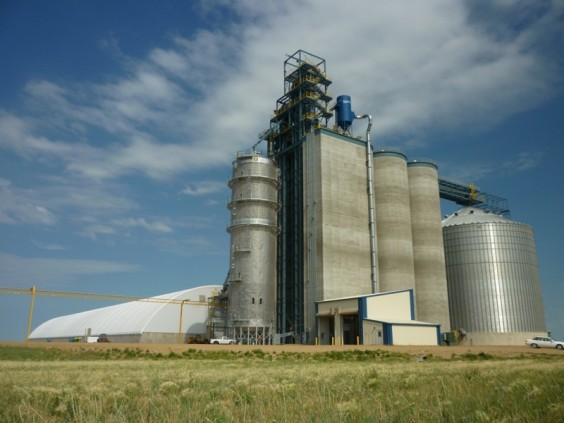 The difference could hardly be more dramatic. The change in the scale of agriculture is hard to miss, but not as obvious in the picture is how much the technology surrounding agriculture has advanced. “If you ever get a chance to visit the new SDWG facility in Andover (or an identical one in Roscoe) do it — it’s amazing,” Laingen wrote. 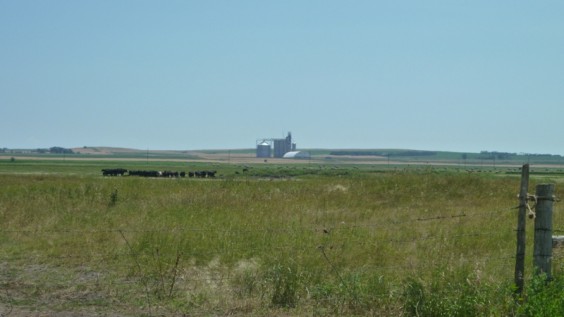 The Andover SDWG facility is the biggest thing on the landscape for miles. Photo by Chris Laingen

Laingen also had another note about his travels:

Part of our trip was devoted to doing some repeat photography.  In 2005 some USGS colleagues of mine who are working on a land-use change project took some pictures in the James River Valley area and used GPS to record the exact location the photo was taken.  We went back and found those locations and tried to get the same photo to see if anything had changed.  Very little has in most cases, but there were some neat “stories” that one could glean from the photos.

One in particular, taken in 2005, was of a CRP field that had a “no hunting” sign posted.  But now the CRP field is corn, and the sign has been partially destroyed…  Much of the decline in SD pheasant numbers as of late can be directly tied to changes in agricultural specialization/intensification.  CRP acres are expected to continue their decline, and if/when SD ever gets a good, old-fashioned WINTER, pheasant numbers could drop precipitously.

Thanks for dropping us a line, Chris!