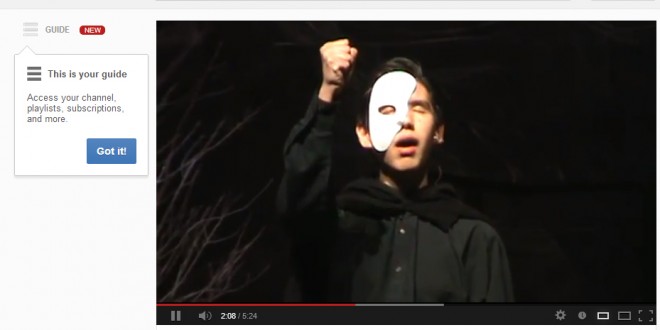 A still from a YouTube video of John Cassens' performance at the South Dakota Snow Queen Festival, Jan. 5, 2013.

A still from a YouTube video of John Cassens’ performance at the South Dakota Snow Queen Festival, Jan. 5, 2013.
By Faulk County Record

Faulkton student John Cassens once again won over crowds with his musical talent, this time at the 2013 South Dakota Senior Snow Queen senior talent contest in Aberdeen where he placed first.

“I honestly didn’t expect to win first place,” Cassens said. “There were a lot of other very talented musicians, some of them even composers like myself.  It was a real pleasure for me just to meet them and even get into the top five.”

The song Cassens sang was “Music of the Night,” from Andrew Lloyd Weber’s musical The Phantom of the Opera, which any musical theater enthusiast will tell you is both the heart of the show and one of the most difficult pieces to master.

“I originally chose to practice the song for the dinner theater event we hosted last year in 2012,” said Cassens. “I chose it because it was my favorite song from Phantom.  I quickly discovered what an immense challenge it was to sing.  The song hits mostly in my upper range, and then it goes down to the very bottom of my range very quickly.”

Also the song goes from whisper quiet at times to a loud belt. That, Cassens said, he had an easier time with.

“People tell me that I’m a small guy with a big voice,” he said.

Whenever he rehearsed, Cassens said he would record himself so that he could judge quality and find where improvement was most needed.

“I think I’ve put in about 10 or 11 months of practice on this song,” he said. “Listening to my first few recordings compared to my most recent, well, there is a really big difference in both how I sing, and what emphasis I put on each word or note.”

Certainly the old maxim that practice makes perfect holds true here, as Cassens’ hard work has paid off for him with this well-deserved accolade.

“I want to say thanks, too, especially to Mrs. Jody Moritz who encouraged me to do this,” he said. “She had a vision of what I could do, and really believed it and that I could succeed, and so I worked hard to make it real.”

“When I saw John perform this song at the dinner theater event last spring, I knew he really had something special,” said Moritz. “I had this idea that if he got a mask and a cape and added some physical expressions to the performance, then he could honestly go and win the Snow Queen talent contest. I just knew that he could do it. He bought himself a mask, and the Faulkton Area Arts Council was happy to lend him a cape from out costume storage. I was very proud of him.”