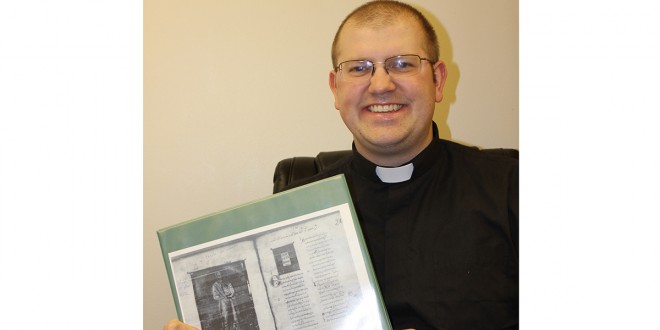 Before he took his calling to the Cresbard/Wecota parishes, he had finished his Master of Divinity program, which is a practical degree, the one that gets you ready to serve congregations. Koch, however, wanted just a little more in his education. For 36 more credit hours worth of schooling, he worked to attain a Master of Sacred Divinity, which is the more academically centered study of the Bible.

When he took his calling to the Cresbard/Wecota parishes, he knew he would still have to finish his master thesis, and he certainly didn’t shirk. His thesis is titled Manuscript 2193 and its text of the Gospel according to John.

“Manuscript 2193 is a Bible, specifically a copy of the New Testament called the Gospel’s Codex, that was written sometime during the latter half of the 10th century,” he said. “We don’t exactly know where it was written or exactly when, but we do know that it was written during the time of the Byzantines. Currently the text itself resides in a monastery located at Mt. Athos in Greece, one of the oldest monasteries on the planet, and it’s possible that is where it was written and that it has never left. As all the books of the time were it was completely handwritten, in a lowercase cursive Greek script. The major challenge is to read the handwriting, and in the course of my studies, I’ve developed the knack of doing that.”

Koch’s goal was to go line by line, word by word in this manuscript, transcribing the Greek and comparing and contrasting and analyzing it with the recognized standard Bible. The New Testament was originally written in Greek, though it has been subsequently translated into languages worldwide, but the original Greek is favored for theological and academic study because there are some concepts that just don’t translate well.

“Lets take the recent Super Bowl as an example. Say you watched the Super Bowl on a black and white television,” Koch said. “That’s what it’s like to read the Bible in modern English. That’s not to say that the translation isn’t adequate, or wasn’t done faithfully. It was. It’s simply that there are details that don’t come through in black and white. Reading and studying the Bible in Greek is like watching the Super Bowl on a wide-screen high definition TV. The colors come through, and you can see a lot more of what it would have been like to have actually been there.”

As sharp as these details can be, though, there is also some signal loss, due to the ever-present factor of human error.

Often, Koch found discrepancies, up to or including passages simply being left out. With his computer, he showed some examples.

“Here, our scribe’s eye skipped and he missed two verses,” he said. “He left off from one word, and picks up writing again that same word a few lines down. I found all kinds of these kind of errors, errors in spelling, grammar, errors in transposition and abbreviation.”

These kinds of errors though, Koch said, you have to expect.

Since Johannes Gutenberg’s successful innovation of a printing press, the world has been blessed by standardized texts. This changed several factors in our world, and was a major factor in the why of the Reformation. Arguably the largest footnote to history was that it became possible for anyone to own a book, and the book that most people did own was the Bible. Before the printing press, books and especially copies of the Bible were extremely valuable and rare. At the time of Manuscript 2193, books were wooden covers with leather binding and vellum pages, all of which had to be prepared with extreme care. The only way to create a book was to have someone physically write it out, which literally required years of work.

“It was not uncommon for someone to be making a copy of the Bible, and then the copying would stop and later, maybe even hundreds of years later, someone else to continue the work,” he said, and showed just such an example where the handwriting is clearly different, and the style of the lettering is at least 200 years apart. “That’s something that’s hard for most of us in the modern age to imagine.”

Koch said that the modern age does have its wonders, though. His thesis would not have been possible without the computer, which allowed him to see high resolution scans of the manuscript without having to fly to Greece to handle the priceless tome.

“This whole process has given me a new respect for the Gospels, and really bolsters my confidence in the churches’ handling of these sacred texts,” he said. “When you see a special on the Discovery Channel or the History Channel, they tend to romanticize and overplay discoveries and portray the church in conspiratorial terms. The truth is, that it’s all very transparent. Nobody’s hiding anything, as long as you can read the language you can understand it, and almost everything is available online for free. I know that there is even an iPhone app that allows you to read digital images of P-46, which are some of Paul’s actual letters.”

Working on this thesis has been intensely time consuming for Koch. He said that he estimated between 600 to a 1,000 man-hours of work into his thesis document. Three-hundred plus of those hours was the simple reading, total absorption and transposition of the ancient Greek text.

“I pursued a Masters of Sacred Divinity simply because I have a deep love of learning,” he said. “I have found that the further that you delve into the text, the deeper understanding you seek, the more faithful you become and rather than that faith becoming simpler, it becomes infinitely more complex.”

His work finished, Koch said that he will fly to Concordia Seminary in St. Louis on May 17 to receive his degree.

“Both my congregations, Concordia Lutheran in Cresbard and Immanuel Lutheran in Wecota, have been very patient with me, sacrificing my availability to work on this project,” he said. “And no one has suffered through this process more than my wife. Work like this can consume you, often I’ve felt I’ve had to live two lives at once, one as a pastor and another in an academic world, and she’s had to live with me when on several nights I was working late just to finish a few more pages. My congregations and my wife, as well as many others, are thanked in my acknowledgements for their patience with me. It certainly feels good to have it finished and I think that has been good for my own knowledge, my own faith and it will benefit my church as well.”