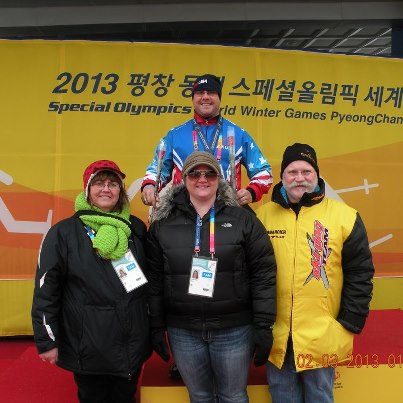 Pictured with Blaine are his family (l-r), Marna, Wendi and Terry

Blaine Schulz, Jamestown, brought home a silver medal after competing in the Special Olympics World Winter Games in South Korea. Schulz’s journey to this milestone has been traveled over several years.

Schulz and another North Dakota athlete, Tommy Mikkelson, Grand Forks, were welcomed home last Friday at the Fargo airport by a cheering crowd. Among the crowd welcoming the heroes home were Blaine’s parents, Terry and Marna Schulz of Adrian. Terry and Marna, and Blaine’s sister, Wendi, were among Blaine’s fans following the team to South Korea.

Besides the awards he won in South Korea, Schulz also has another title. He was named the Special Olympics North Dakota Athlete of the Year.