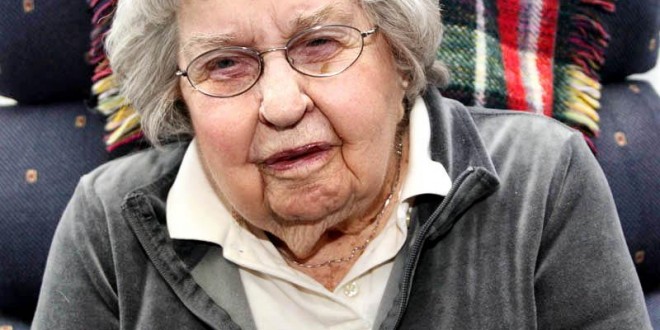 That’s what Mae Olson’s life is all about, and turning 100 is just another step in her life-long goal of accomplishments for herself and thousands of others whose lives she has touched.

On Sunday, Mae Aves Olson will be 100 and her family plans to celebrate with her from 2-3 p.m. at Wheatcrest Hills. Friends and relatives are invited to join the celebration.

Celebrations have been a major part of Olson’s family life. For almost 50 years, the Olson family would have a picnic at Mae and Charlie’s home at Cottonwood Lake. Family came from Texas, Florida, Illinois, and many other states.

Olson’s daughter, Lois Jackson, and her husband, Gene, from Portland, OR, and her son, Lloyd, and wife, Tina, from Boothbay, ME, along with four grandchildren and four great-grandchildren plan to attend the celebration Sunday.

Mae Aves was born in Groton, the daughter of George and Fanny Aves, and graduated from Groton High School. Her father owned the general store in Groton; Mae and her sister, Fanny, worked in it.

“We learned a lot working for Dad. We both wanted to go to college, but Dad felt we had plenty of things to do and more than enough education for women in the 1920’s, but Fanny convinced him to let us attend college,” Olson recalled.

After getting her two-year degree, she returned to the Lake City area and taught at a country school. She met Charlie Olson, a young farmer, and they married Dec. 23, 1936.

Being a married woman and teaching school were not acceptable in the 1930’s. Olson was told she could finish the year, but the wedding ring on her finger meant she could no longer teach in Lake City.

She became a full-time farmer’s wife, which included planting a large garden, canning everything in it, and raising cows, chickens and pigs.

“When I married Charlie, I married into the whole family of nine Olson children,” Olson laughingly added. “We lived on the original Olson farmstead, so some of them lived with us. We ate from our garden year round and always had meat from our livestock. We got along really well. We played a lot of cards, attended dances and had a good life together.”

For 12 years, the family had no electricity or running water. In 1948, both “modern” conveniences came to the Lake City area.

“Imagine feeding a threshing crew three times a day with no running water,” her daughter Lois Jackson said. “They carried water from a well on our farm for all water uses.”

In the early 1950’s, Olson returned to teaching in a one-room school house near Veblen for three years. She also taught in the Amherst area for a year and then transferred to Britton for the 1960-61 school year where she taught the third grade.

In 1957, Charlie became the ASC (Agriculture Soil Conservation) manager in Britton, and the Olsons moved to Britton.

In the late 1960’s, Olson attended summer school at Northern Normal in Aberdeen to get her four-year teaching degree.  She stayed in the dorm on campus during the week and returned to Britton on the weekends.

“Dad was very supportive of her teaching and schooling,” said Jackson. “My mother always encouraged me to strive to do my best. I wanted to be a nurse and there were no accredited colleges in South Dakota in the 1960’s, so Mom drove me to the University of Iowa in Iowa City and suggested I go to school 600 miles from home and develop my dream.”

Jackson’s Bachelor of Science degree led her to California to her nurse practitioner license and then to her master’s degree in nursing.

“Mom knew the importance of making your dreams come true because she had,” Jackson said.

“She was a strict teacher, but all of our teachers were,” Elsen said. “We minded our ‘P’s’  and ‘Q’s’  in her classroom and I’ve always respected her for it. As I grew older, I grew to know her as a sweet, warm person.”

Grupe recalls she was strict and all business.

“A few years ago, I took some of the residents from the manor on a pontoon ride and Mae was one of them,” he said. “When she got on, she asked me if I remembered her and when I told her I did, she told me to ‘sit down and be quiet.’ We both laughed because she had told me that many times when I was a third grader. She still has her sense of humor. I respected her then and still do.”

“We really looked up to Mrs. Olson,” former student Roger Christenson recalled. “She expected us to pay attention and we did. We worked hard in her room. She was a personal friend of my Grandma Christenson’s and now I consider her a friend of mine.”

“It has been a good life,” Olson recalls. “My health is good. I walk, exercise, read and play cards, so I’ve still got a very good life. I’ve worked with good adults, students and my life has been very blessed. I can ask no more of life.”