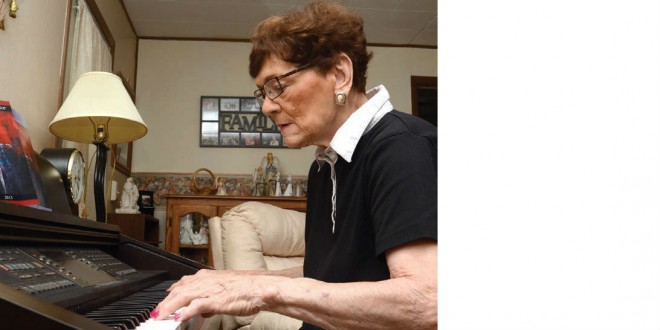 It’s late in the middle of the night, and Joanne Herr can’t sleep. So, she goes to her living room to do the one thing she knows will help.

“It’s a good relaxer. You get a little uptight, and it’ll soothe you,” she said. “There is always music at my house. Music is the language of angels.”

Today, Herr is known in the area as being a church organist, pianist and overall musician.

Herr grew up in a musical family on a farm south of Webster. Born April 14, 1936, she grew up to the sounds of her parents’ dance band practicing in their house.

“Music was our entertainment at home,” she said.

Her parents called their band the Cowboy Ramblers and they would travel to shows. They even played with people like Myron Floren. Jazz was one of their specialty genres.

“So they used to brainwash me,” she joked.

She told the story that one night her mom was sick when the band had a show to perform. She was just 10 or 11 years old and her dad took her along to play piano.

But play she did.

Herr attended the first eight years of her education at St. Otto’s Catholic School in Webster. It was here that she took her first music lessons. The nuns there taught her to play piano. She remembers the weekly lessons she and her siblings took.

“You’d better be there and ready,” she said.

Once, her family’s house burnt down and the following Christmas, her parents surprised the kids with a new piano.

“We all thought we’d died and gone to heaven,” she said with a laugh at the memory.

Another time when she was quite little, she remembers all of the band members showing up at the farm and playing like they were at a big celebration. When she finally asked her mother why everyone was so happy, she was told, “Because the war is over!”

During high school, Herr was a part of a band that called themselves the Moonlight Serenaders. The six to eight members of the band – all friends – would travel to Watertown on a Friday afternoon to record in a studio there.

Herr graduated from Webster High School in 1954. She says she would have graduated with the class of 1953 had it not been for getting sick.

That year, she was married to Arvid Herr from Lily. They moved to Redfield for about a year before Arvid joined the service. While he was in Texas for basic training, she came back to Webster and worked as a nurse’s aide at the hospital.

“Years and years ago, schooling for a nurse’s aide was right there,” she said.

When Arvid was transferred to Wyoming, she moved there with him, and when he was transferred overseas for a year and a half, Herr moved back to Webster once again, to be nearer to her parents, but this time with a daughter.

When Arvid came home to the states, Herr packed up her car and drove five days to get to
St. Charleston, SC, where he was to be stationed. She said her father and husband were neither happy with her for undertaking such a long trip with just herself and her daughter.

Because she had moved around so much, Herr had not been able to keep any musical instruments on hand. During the eight years she lived in South Carolina, she said she began missing music in her life.

“I was so hungry for music, I went out and bought an accordion,” she said.

Because she didn’t want to bother anyone while she played, she would lock herself in the bathroom while she played. “Then I’d come out and find kids all over the place,” she said with a laugh of her growing family, which by then consisted of two boys and a girl.

After eight years of living on the military base in South Carolina, Herr said they were all ready to come home to South Dakota. So Arvid took a job with an electrical power company in Sioux Falls. Later, the company moved Arvid’s job to Minneapolis for a year and then back to Sioux Falls.

“By then, the kids were getting old enough and were saying, ‘do we really have to move again?’” Herr said. “Eventually I said, that’s enough. Let’s go home.”

Arvid found a job with Lake Region Electric and they moved back to Webster in the mid-1960s.

“We moved back to Webster for good,” she said.

That’s when they were surprised by the addition of a fourth daughter to the family.

“She kept us young,” Herr said with a laugh.

In 1999, Arvid died after battling cancer for three years. He stayed at home during his sickness and Herr’s training as a nurses aide became helpful in administering his health.

Today, Herr volunteers at Needs Anonymous, Bethesda and is a member of the local Red Hat Society. She also is active in Catholic Daughters and Christ the King Catholic Church where she has been the organist for the past 38 years. Now, she also takes her electric piano to the nursing home to play and has played for as many as 15 different area churches before. She also plays for weddings, funerals and other events.

“I never dreamed I’d be a church organist,” she said.

While Herr lived away from the Webster area, she said what she missed the most was, “The whole town! The culture was so different, especially in the south. The other places we lived were so big. Traffic was, well there was a lot of traffic,” she said.

Of all the places she’s lived, she said, “Webster is still the best place to live.”

With the way the world is today, she says she’s glad she lives in Webster.

“If you’re in trouble, someone will be there to help. People are kind here,” she said.