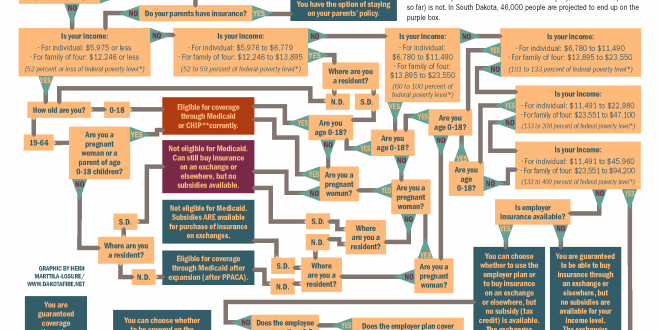 INFOGRAPHIC: How does Obamacare affect your pocketbook?

INFOGRAPHIC: How does Obamacare affect your pocketbook? 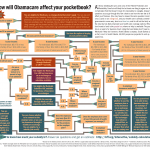 INFOGRAPHIC: The math of the Medicaid expansion 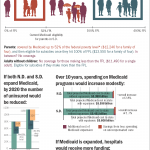 Time to imagine your best “Godfather” voice: Hey, State. Uncle Sam is gonna make you an offer you can’t refuse.

If states expand their Medicaid programs to cover all people at 133 percent of the federal poverty level and below, the feds will make it a pretty sweet deal: The federal government will cover 100 percent of the cost of the expansion for three years (2014-16), and at least 90 percent thereafter.

“I can tell you as a return on investment, as a governor, I would have given my eyeteeth to have that kind of deal with the federal government,” said Kathleen Sebelius, current Secretary of the Department of Human Services and former governor of Kansas, as she addressed the National Rural Assembly in Bethesda, Md., on June 26. “It’s a way to really expand healthcare for millions of people, and a large share of that paid for.”

Thus far, 24 states have nevertheless agreed to expand their Medicaid programs. North Dakota is one of them.

Gov. Jack Dalrymple did not approve of the overall health care law, but said he tried to leave politics out of the discussion when considering expansion of Medicaid.

“In the end, it comes down to are you going to allow your people to have additional Medicaid money that comes at no cost to us, or aren’t you?” he told the Grand Forks Herald in January. “We’re thinking, yes, we should.”

Republican state legislators in North Dakota said they reluctantly voted for the bill because of the cost to the state if they did not do so, according to an Associated Press story. The law passed in April.

South Dakota is on several national lists as a state with governor who has refused to expand Medicaid, despite the fact that Gov. Dennis Daugaard appointed a task force that met over the summer to look into the pros and cons of expansion. The task force finished its study on Aug. 20 and summarized its findings in a 40-page report, which will be released after a few changes are made, according to an Associated Press story.

The task force’s report will be presented to the S.D. Legislature for their consideration in the 2014 session. Deadlines were set earlier for states to decide on Medicaid expansion, but they have been set aside. “States can take up that expansion at any time,” Sebelius said.

The two Dakotas are similar in many respects, but at least for now have fallen on two different sides of this issue. With North Dakota enacting the Medicaid expansion, how will the two states fare differently if South Dakota does not expand Medicaid?

The Supreme Court decision making the Medicaid expansion optional for states created a problem that the PPACA did not have in it when it was made law: If states don’t expand Medicaid, people who are not eligible for Medicaid currently and who make less than 100 percent of the federal poverty level (in 2013, that’s $11,490 for an individual or $23,550 for a family of four) get no help at all from either the state or federal government.

That’s where the biggest difference will be for residents of the Dakotas: In North Dakota, about 24,000 who are currently uninsured and below 100 percent of FPL will be eligible for health care coverage through Medicaid. In South Dakota, about 46,000 in that same category will not. (These numbers are from the Urban Institute and the Kaiser Family Foundation.)

Since children, pregnant women and very poor parents are already covered, those who be left out are adults without children and parents who aren’t extremely poor.

An additional 12,000 in North Dakota and 13,000 in South Dakota are currently uninsured and fall between 100 percent and 138 percent of the federal poverty level. They are eligible for federal subsidies if they chose to buy their own insurance through a health exchange. In North Dakota, most of those (those up to 133 percent of the FPL) would also be eligible for Medicaid.

So what happens in South Dakota if these 46,000 or so remain uninsured?

“We know people without health insurance coverage live sicker and die younger,” said Dan Heinemann, president of the South Dakota Medical Association, when he spoke before the S.D. Medicaid task force in June. He encouraged passage of Medicaid expansion, on behalf of the association’s 200 members.

A study conducted in Oregon found that adults who gained Medicaid were more likely to report that they were healthy, and more likely to have a regular doctor and to receive preventative care. Self-reported mental health improved notably—perhaps in part because the stress of medical costs was diminished. “Medicaid virtually eliminated catastrophic out-of-pocket medical spending for the adults who gained coverage,” according to a Kaiser Family Foundation report.

“Oftentimes, a person’s health care takes second place to everything else they have,” said Jay Jahnig, administrator for the Faulkton Area Medical Center. “If they can’t afford to see the doctor they don’t. They nurse that cough, or suffer through whatever it is that has ailed them … The new laws will allow them to get that care. This will keep the general population healthier.”

Rural hospitals would also miss out on some benefits.

Sebelius said the expansion would be good for critical access hospitals, “who are now serving people, many who don’t have coverage,” but will “now have paying customers.”

Two are hospital administrators agreed, but said the effect on them specifically would be minimal.

“Speaking as a hospital administrator, getting paid something for a bill is better than getting paid nothing,” Jahnig said. “The problem of uninsured patients should be minimized if the system works. We are fortunate here in Faulk County, at our hospital. We only have about 3 percent of our patients as Medicaid patients. Some hospitals, and some of these are hospitals I worked for another state, I’ve seen 30 to 40 percent Medicaid patients. This means that a lot of hospitals nationwide are strapped for cash, because Medicaid doesn’t quite pay costs.”

Nick Fosness, administrator of the Marshall County Healthcare Center, said that the Medicaid expansion wouldn’t affect their hospital very much either.

“It wouldn’t have a big impact on us because we are a low Medicaid user with most of our patients having private insurance or Medicare,” Fosness said. “It’s the uncompensated care that is the lure for hospitals because it represents a large dollar amount for some of them.”

The South Dakota Budget & Policy Project found that all S.D. counties would have additional residents eligible for Medicaid if South Dakota expands the program. Pennington and Minnehaha have the most such residents (more than 5,000), while Faulk, Clark, Edmunds and McPherson are among the counties with the fewest (under 250).

For some states, choosing to expand Medicaid was a no-brainer: They would pay significantly less for their Medicaid program if they did so.

By expanding Medicaid, Vermont and Delaware would both end up paying about 12 percent less between 2013 and 2022, according to projections by the Kaiser Commission on Medicaid and the Uninsured.

Both Dakotas would end up paying slightly more over those 10 years than they would if they didn’t expand Medicaid, but not significantly more: When savings from uncompensated care is figured in, North Dakota will end up paying 2.8 percent ($159 million) more than without Medicaid expansion, and South Dakota would pay 1.7 percent ($95 million) more.

Some states will end up paying less because they invest more in Medicaid currently; the federal government will end up picking up the tab for Medicaid coverage that those states had been paying for already. The Dakotas, on the other hand, have significantly lower income limits for Medicaid coverage than many other states, and so have more ground to cover to get from where they are to the 133 percent level.

A number of people spoke against expansion to the S.D. Medicaid task force in June. One physician said Medicaid doesn’t cover the cost of preventative care measures that would make a difference in the lives of patients and expansion would keep the state enmeshed in a broken system. Another said it wasn’t constitutional for the state to provide health coverage at all.

One recurring question was how a new entitlement would be paid for in an era of debt and deficits. President Obama campaigned for the PPACA by saying it would be completely paid for, but many speaking against the program clearly distrust that promise.

Another argument against expansion was the worry that it would exacerbate South Dakota’s physician shortage. Watch for a future Dakotafire story on that topic.

The basic question remains: Is it worth it to spend 1.7 percent more to give 46,000 South Dakotans health coverage? Thanks to the Supreme Court, it’s an offer the state can refuse. If it should is up to the Legislature.