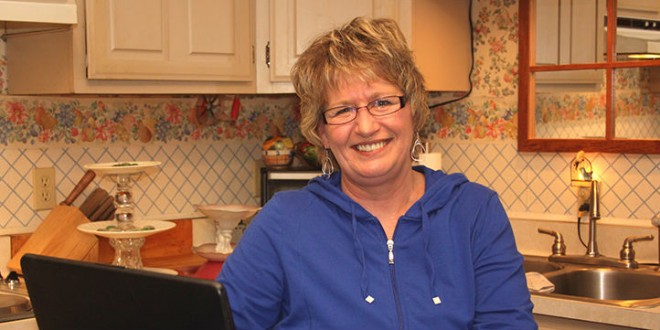 “I never expected it to grow this big, said Marilyn Foster of her Marilyn’s Way Facebook group.

Having fans of her Facebook site in 16 different countries, she has really enjoyed what it has brought into her life, as well as how it is helping others feel better about themselves and their homes.

“Flylady is who inspired me. She is Marla Cilley, who wrote the book Sink Reflections,” Foster said. “The book’s name is reflective of starting with the basics – such as shining your sink. Getting dressed and doing your hair and makeup was another step in her daily to-do list. This was my downfall. Being on disability, I had gotten into a rut of wearing my pajamas all day and feeling very overwhelmed. I had moved from a large house to a small house and was overwhelmed with where everything should go and where to start in organizing.”

On March 1, 2010, Foster began the Flylady challenge of getting dressed to the shoes for 436 consecutive days and even took a picture of herself, as was suggested.

“I posted on Flylady’s Facebook page every day and noticed after a while I had about 500 people following me. I started writing ‘the Flylady way,’ which later switched to ‘Marilyn’s way.'”

Both websites are about taking care of one’s home and building on good habits and routines. Marla was a former fly fishing instructor, so that is where her nickname came from. Her motto is Finally Loving Yourself (F. L. Y). First love yourself is what I’d like my F. L. Y. to represent in becoming a ‘Flylady.’ First love yourself, then others come next.”

Marilyn Foster feels that you owe it to yourself to get dressed and ‘show up for the day.’ This helps you to be more motivated for the rest of the day’s chores.

“I’m more visual in learning, so I’ve developed some sheets for printing out that show nine habits that everyone should follow every day,” Foster said, “three morning, three afternoon and three evening habits will help you stay on track for the day.”

Then there is the ‘weekly home mambo,’ things that she feels should be accomplished every week, such as change sheets, cull magazines, clean mirrors and doors and similar projects.

“My third sheet is a ‘Progressive Task List’ which is a list of things you want to get done in the future. There is room for 25 things to do in the future. I suggest when you have some free time, to look at this list and set the timer for 15 minutes and work on one of the projects on the list.

“Doing weekly habits on certain days also helps keep you on track. We really need to let go of perfectionism and procrastination. Sometimes you’ll forgo a task because you don’t have the time to make it perfect, so then it won’t get done at all.

“Clutter is a problem for many, and I can honestly say I’m 80% decluttered now. I try to make it fun. I’ve started a beta testing group and am on day 50 of seeing how it works. There may be a future book in the process.”

Marilyn moved back to Garden City in 1998. A Clark High School graduate in 1977 with a South Dakota State University degree in Home Economics, she’s worked previously in communications and payroll services and in sales.

A brown recluse spider bite and a bad car accident along with fibromyalgia changed her life dramatically and she ended up on disability.

“Being at home, one can get into a rut, especially when you don’t feel good,” Foster said. “This has helped me so much. I want to help others and through this site I’m doing just that. I keep busy all of the time now; it’s too bad it’s not a money making deal. I make no money off of this site. My open page on Marilyn’s Way is more gardening tips, and I have a secret group that is more on taking care of your house and is a private site. Young mothers don’t know how to ‘do it all’ like we’re sometimes expected to. The 35-44 yr. old age group is the group that follows me according to Facebook. I’ve really enjoyed this. It’s amazing how I can reach so many people from my kitchen in Garden City, S.D.,” Foster ended.