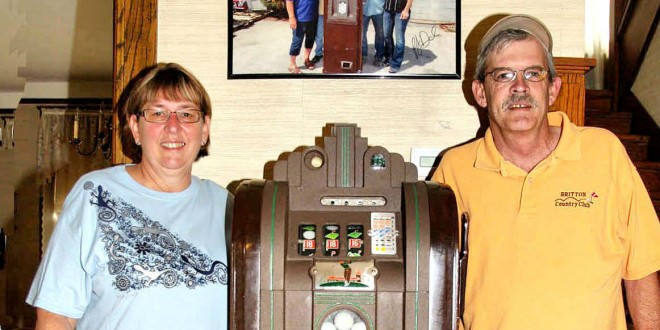 The machine sat in the corner of Ulic Henehan’s garage for years, but now it’s in the living room of his Britton home – and for a good reason. It’s worth nearly $30,000.

Twenty-five years ago the Britton native went to an auction at what is now Tyler’s parking lot. He had always loved golf and was intrigued by a slot machine that paid out golf balls, but to this day has no idea how the machine came to be in Britton.

“Bob Marx sold his storage building to Holland Oil and sold the contents of the building at the auction. I paid $252.50 for the machine. Today, in this age of info, if it would have hit the Internet someone would have known what it was and the price would have definitely gone up.”

The machine sat in a corner of the garage until Rosanne Miller had some work done on the exterior for cosmetic effect. Then, when the television show American Restoration came on the air, the couple talked about it and decided to find out more.

American Restoration is a reality show that transforms unique old items into mint working condition that can fetch big price tags. It is based on a business started 30 years ago in Las Vegas, NV, by Rick Dale in his backyard.

Miller sent a few emails to the shop in Las Vegas, and they quoted a price of about $3,500 but did not seem “overly excited.” But Henehan and Miller decided that was acceptable, and the first week of January they loaded the machine in the car and headed for Vegas.

“We pulled up to the shop in Las Vegas and asked for the girl we had communicated with via email,” recalled Henehan. “She was unavailable, but Kelly could help us. She is one of the stars of the show and my trip was a success. I got to meet Kelly.”

But things got even better.

“Kelly looked at the machine, asked a few questions, and said, ‘I’ve got to call Rick (Kelly’s husband and owner of the restoration business).’ We took that as a good sign. We wheeled it into the shop. A few minutes later Rick arrived. His first word was ‘Whoa!’ Another good sign.”

Kelly took pictures and sent them to New York (Left Field Productions), while Rick was calling one of his “experts.” After his call he informed the Britton couple that the machine was quite a rare piece – a 1930’s machine made by the Mill’s Corp. He said in its present state it was worth $5,000-$8,000 and restored it could push $30,000.

“That was a really good sign,” said Henehan. “And they were pretty certain the producers would want to feature it in season four of American Restoration. Unfortunately, when they saw what the machine actually was, and the condition it was in, the price to restore it went up to $8,000. But we decided, whether it made the show or not, we would restore it.”

About 10 days later New York called, saying that American Restoration would love to feature the golf ball slot machine on the show and that details would follow.

First came the paperwork and non-disclosure forms. The couple couldn’t talk much about the experience until the show actually premiered on May 7 on the History Channel. That’s when they found out that only Henehan would actually be on the show.

“We had listed only me as the owner,” Henehan noted, “so I would be the only one on camera. That was disappointing. Rosanne would be allowed on the set to watch the filming but would not get air time.”

The filming began with an interview about the background of the machine. One of the reality show’s characters, Kowboy, and Henehan wheeled the slot machine into the lot and Rick talks about what he knows about the machine, how he thinks it could be restored, and the cost.

Two months later the couple returned to Las Vegas for the filming of the revealing of the restored machine.

“The producer tells me she wants ‘big excitement, big emotion,” Henehan said. “If you know me, that is not something I’m good at. But we muddled through for three hours. So, for my four to five minutes of actual air time, the filming was six hours.”

During the filming Henehan had an opportunity to get to know the cast of the show.

“Rick is wound pretty tight. They film five days a week, plus they are restoring lots of items not on the show, so he has a busy schedule. Kelly is the organizational wizard behind the business. She always had time to help us out and tried to keep everyone as calm as possible.

“The real character is Kowboy. He is a no-nonsense kind of guy. They have a little plaque in the shop with two of Kowboy’s teeth mounted on it. He doesn’t like dentists, so he pulled them out with a vice-grip. Rick’s brother, Ron, is the PR guy. They have a free tour of the shop every hour and if Ron is around you will find him taking pictures and smoozing with the tourists. All in all they are a great bunch.”

Area residents still have opportunities to see re-runs of the show. The next listing on the History Channel is Sunday, June 16, at 4 p.m.