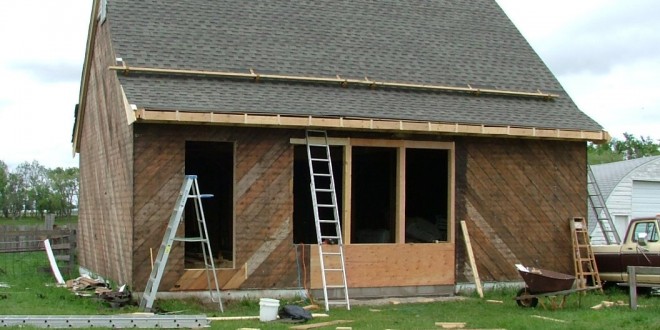 Turning a granary into a house. At the Marttila farm, 2008. Photo by Heidi Marttila-Losure

FiredUp: Houses serve as marketing for your community. What message does your housing send?

If the homes in your town are sending the wrong message, it may be time to think creatively about how to make housing an asset instead of an eyesore.

If a family looking for a new place to call home drove through your community, what would they see?

Often when we live in a place for a while, we stop really “seeing” it—but the things we’ve gotten used to are obvious to someone seeing our community for the first time.

Many rural towns share a common problem: inadequate housing. Either deteriorating homes are sitting on prime lots, or a weathered “for sale” sign has been advertising the same house for years.

The issue at large overwhelms communities. The holdup might be not knowing who owns the property, not wanting to step on anyone’s toes, or the price is higher than the market can afford or wants to invest (considering the amount of money that will need to go into remodeling). It’s a touchy subject, but it needs to be addressed in order for rural communities to market themselves properly.

Community members need to ask themselves, how inviting is our community? What are we doing to attract people to our town? I write “community members” because it takes more than just a couple leaders to create an inviting atmosphere; it’s a collective effort.

Communities need to revisit how they market or present themselves. The best marketing tool for a community development is simply attitude: honesty, patience, sense of hope, and the ability to set aside differences and work together to promote positive development.

On the other side of the equation, prospective buyers should keep an open mind when looking at available properties and housing. Not every abandoned home is salvageable, but other abandoned homes are hidden gems.  If you watch HGTV or DIY Channels you know what I mean. Often fixing up an older home is cheaper than building from scratch, given a solid foundation and structure. It may be a lot of work, but for some people, the reward of remodeling or even flipping a house is well worth the effort. Other people may see an abandoned lot and envision a new home with landscaping. All it takes is vision and thinking outside the box—property is opportunity in the making.

Whether you build or remodel, the effort is an investment and requires careful planning. You have to consider what is best for you or your family. For example, my family and I bought an older home in Veblen and are slowly remodeling the house and landscaping based what we can afford.  Phase one was painting and flooring. We found beautiful oak floors under the old carpet and are working to preserve as much as the history of the home while giving it a modern feel.  Phase two is installing a more energy-efficient heating and cooling system, along with refinishing some of the antique furniture in the home when we bought it. It may not be happening all at once, but we are enjoying the process. 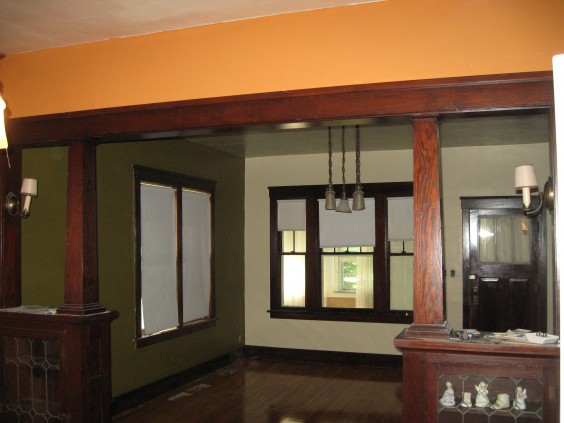 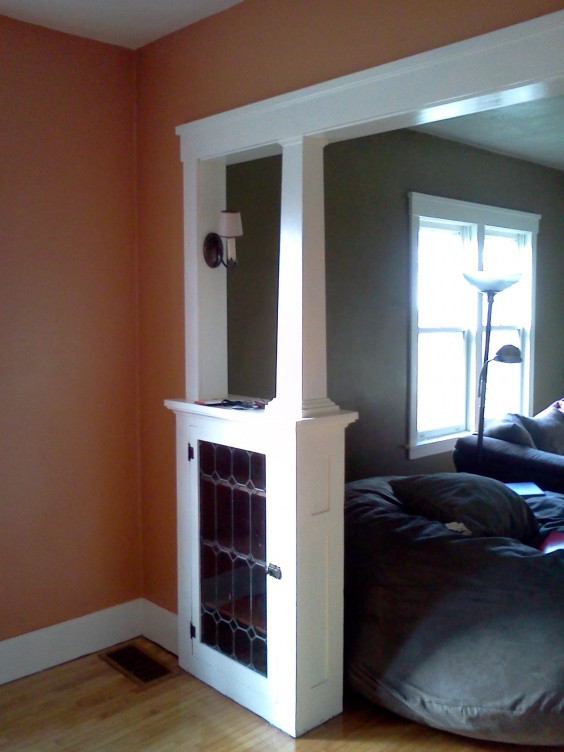 The Geyers painted the trim as one of their projects (it was not oak—Geyer said she knew it would be a sin to paint it if it was). Photo courtesy Karie Geyer

In rural Frederick, S.D., Dakotafire Editor Heidi Marttila-Losure and her husband, David Losure, are now living in the granary they converted into their home. The project cost less than building new would have, but a lot of unpaid labor from David and other family members figured into that equation. They say it was well worth the extra work.

“We were asked several times why we didn’t just buy a trailer house or a nice doublewide,” Marttila-Losure said. “We would have been able to move in more quickly, but our home wouldn’t have the character of our granary house, with its big south windows, and floors made out of the old grain bin walls. It is just such a nice feeling to live in a house we designed and built ourselves.”

Marttila-Losure kept a blog about the renovation: See the first entry explaining why they embarked on the project here. 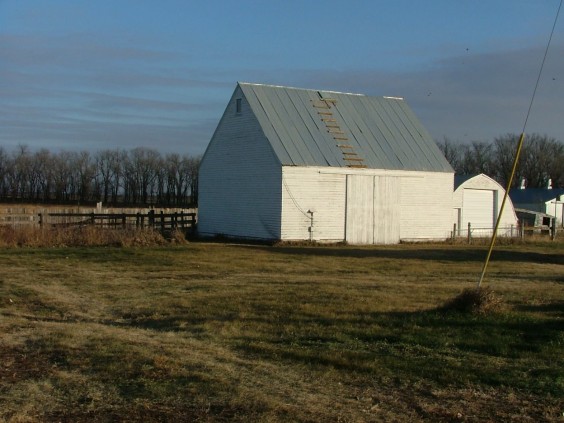 This is the granary on the Marttila farm before the family started work on converting it to a house. It had been built sometime in the 1950s. Photo by David Losure 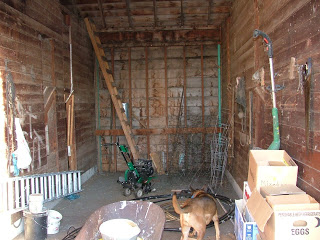 The interior of the granary in 2007. It was used for storage then; grain storage worked better in metal bins, where less manual labor was required to move it. Photo by David Losure 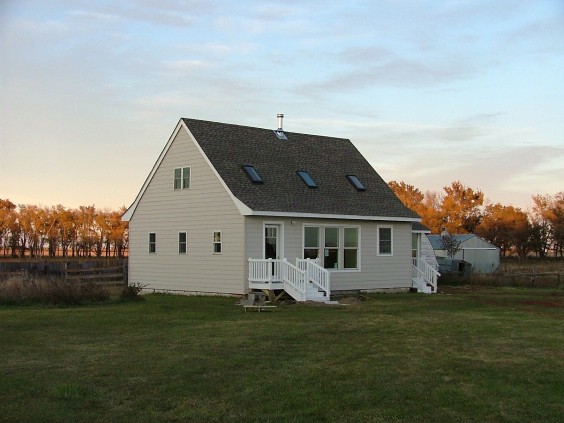 The granary house after construction. Skylights on the roof allow for ventilation, and the large windows on the south side are part of the passive solar design. Photo by Heidi Marttila-Losure 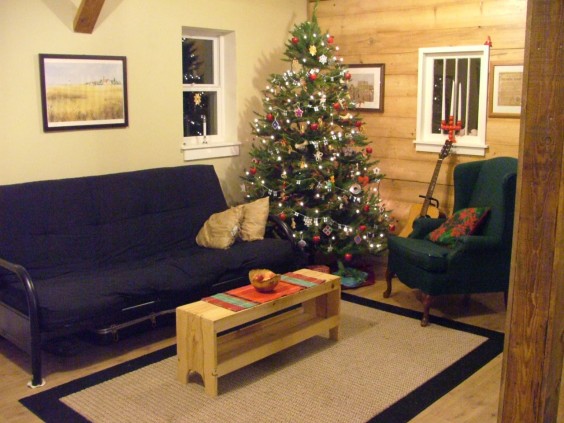 The living room of the granary house in 2009. The window on the interior wall had been one of the high windows on the granary. Photo by Heidi Marttila-Losure. 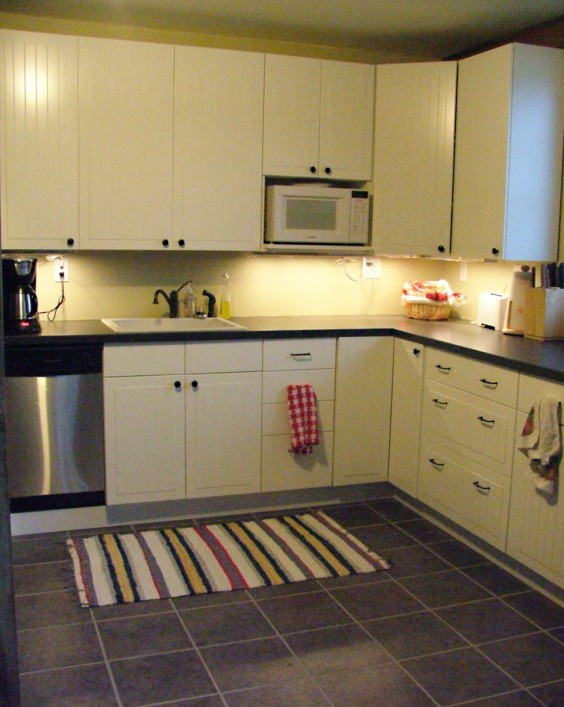 A view of the kitchen of the granary house after the family moved in in 2009. Photo by Heidi Marttila-Losure

These are just two examples of creative thinking about rural housing. (You may have your own example! If you do, please share it in the comments.)

Let’s look at this housing issue from a different perspective. Consider “housing” in your community like a human resident: How can we as a community get this property back on its feet? Who do we need to call? How can we better market it to prospective buyers? Talking about change doesn’t actually create change; motivation is the missing link. That is the difference between “an eye-sore” and “an opportunity” when it comes to housing.

Karie Geyer, owner of Creative Consulting, LLC, lives in Veblen, S.D., and is a freelance writer for Dakotafire. Karie is an advocate for rural community development.