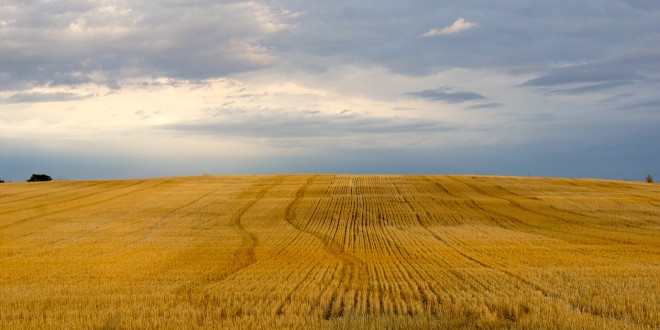 S.D. ag land assessments jump as much as 25 percent—but they could be even higher

Many S.D. landowners likely noticed a significant bump on the valuation of their land in the 2013 tax assessments that arrived in their mailboxes in early March.

When South Dakota went to a productivity model for taxing agricultural land in 2009, increases each year were limited to 10 percent. The dramatic increase in crop prices in recent years has pushed the formula’s assessed land values up dramatically, and increasing by just 10 percent a year wasn’t even getting close to those values. 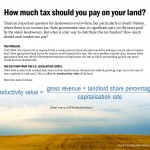 How does the South Dakota productivity value model work?

Get an idea in this infographic.

The 2012 Legislature passed a new law removing the 10 percent limit. The taxable value can now increase up to 25 percent. The percentage increase depends on how far the county assessments fall below the full agricultural income value of the land.

Even with bigger jumps allowed, many counties are still far below their assessed values. The formula would have doubled or even tripled the assessed value of some West River counties without the 25 percent limitation in place.

The formula’s projected increases for other local counties are more moderate in comparison: 58 percent for Clark, 45 percent for Marshall and 36 percent for McPherson.

But all those numbers are theoretical. With the new law in place, local counties all face increases of 20 or 25 percent for cropland; non-cropland increases vary from 3.3 percent to 20 percent.

Individual landowners could, however, have increases greater than the 25 percent limit, since the limit is an average for the county.

But it’s also possible that taxes won’t actually increase at the same rate as the valuation does, according to Shannon Lee, Marshall County director of equalization.

“There are several factors such as levies, school and county budgets, and levels of assessments that all factor into the equation,” she said. 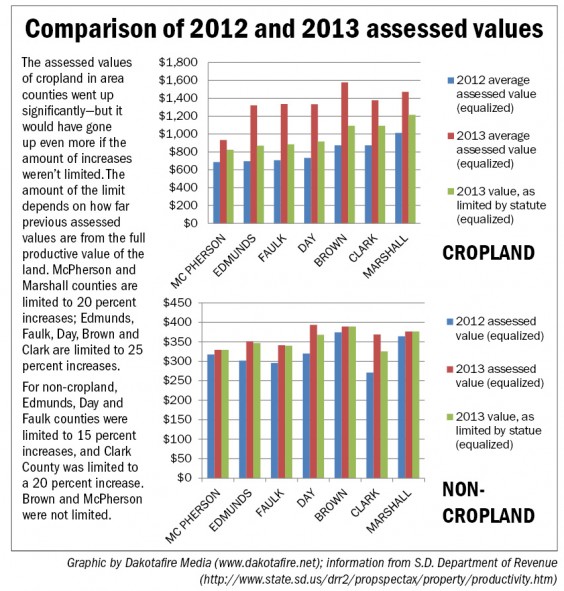 Some landowners may also have seen increases because their soils ratings were recalculated.

The Department of Revenue has been updating the way it ranks soil productivity, according to Trevor Cramer, Faulk County director of equalization. The new information updates data from 1992.

“Since farming methods have changed since 1992, many of the soils productivities have increased and some have decreased,” Cramer wrote in a letter to the Faulk County Record. “Every soil rating changed either going up or going down. The rankings were developed using yield data for corn, soybeans, spring wheat, oats, sunflowers and alfalfa.”

The new rankings also reclassified some soil types as suitable for crops that had previously been non-crop soils, Cramer wrote.

The average-acre starting point for figuring the basis for taxing cropland is considerably higher than the basis for taxing non-cropland, so the taxes on parcels of land that switched that classification may have increased considerably. The tax would have increased even if the land use didn’t, since soil types, not land use, are used to determine whether land is taxed as cropland or non-cropland.

County assessors are also working on making their analysis of soils more accurate. The boundaries for some soils have been updated, and by using GIS they are now able to figure soil types to the 0.01 of an acre, Cramer said. Before this new technology, they hand-counted acres by studying maps.

Do you think the productivity valuation system is a good way to tax land?
Has it affected your land-use decisions in any way?
Would you prefer a sales-based valuation system?