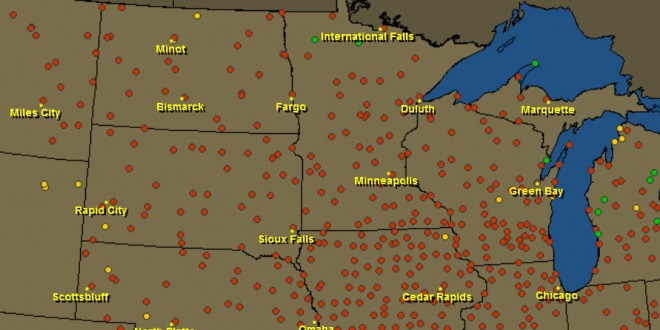 According to a Rueters story, since March 12, the heat wave has already set at least 7,000 records.

An earlier story on the website Climate Central said that 2,200 records had been broken, but the number rose over the subsequent week. Quoting writer Andrew Freedman:

It’s quite possible that this March heat wave will be considered an unprecedented event in the U.S. historical record, which extends back to the late 19th century, based on the margin by which records are being exceeded, the wide geographic scope of the heat wave, the duration of the event and the time of year when it is occurring.

Just take a look at the dots on this national map, which indicate weather records in the last seven days. Iowa and Illinois are almost completely lost under them, with surrounding states severely speckled as well.

The Dakotafire region also had many high-temperature records:

Check out the interactive map here.

Is this heat wave the result of climate change? Most scientists would argue that it’s difficult to pin any one weather event on climate change, but that climate change is likely behind a pattern of wilder weather.

Here’s how Freedman puts it:

In a long-term trend that has been found to be inconsistent with natural variability alone, daily record-high temperatures have recently been outpacing daily record-lows by an average of 2-to-1, and this imbalance is expected to grow as the climate continues to warm. According to a 2009 study, if the climate were not warming, this ratio would be expected to be even. Other studies have shown that climate change increases the odds of extreme heat events.

The warmer-than-normal weather is likely to stick around for another week, and there is also some potential for severe weather in the forecast.

Keep an eye on your TOR:CON number

If you’re into weather watching, you may want to check out TOR:CON, which gives the tornado condition index for a certain location. Eastern South Dakota had a TOR:CON of 3 on Monday, meaning that there was a 30 percent likelihood that severe weather such as thunderstorms or tornadoes would occur. Eastern North Dakota’s was 4 on Monday. Neither state has a TOR:CON number for Tuesday.