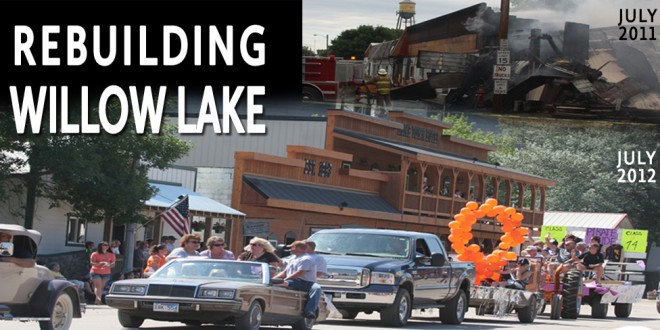 Turning tragedy into opportunity: One year after devastating fire, Willow Lake downtown is better than ever

No one would have wished for the scene that Willow Lake residents woke up to the morning of July 12, 2011. 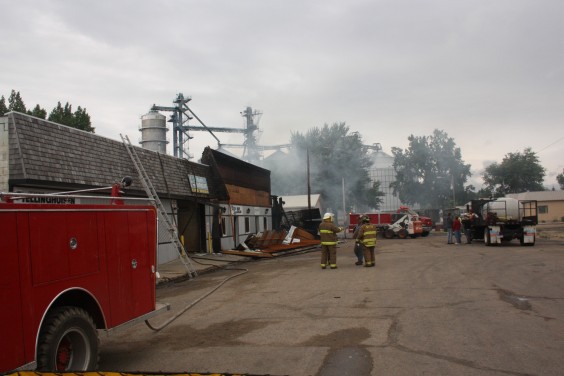 The scene in Willow Lake the morning of July 12, 2011, after fire destroyed four businesses. Photo by Clark County Courier

After an overnight fire blazed down the town’s main thoroughfare of Garfield Street, four businesses were in charred, smoky ruins: the Willow Lake Locker, Tellinghuisen Construction, Bob Syring & Associates (an accounting firm) and the Mona Lisa Hair Salon. For a town with a population of fewer than 300, it was a significant blow.

Some other rural towns, even those with considerably more residents, might have felt it as a signal to give up—yet another sign that life was moving toward Sioux Falls or Minneapolis or Los Angeles, leaving rural roots to wither.

In Willow Lake, something quite different happened: The fire burned down businesses, but it also sparked a drive to survive and a phenomenal flurry of community action. 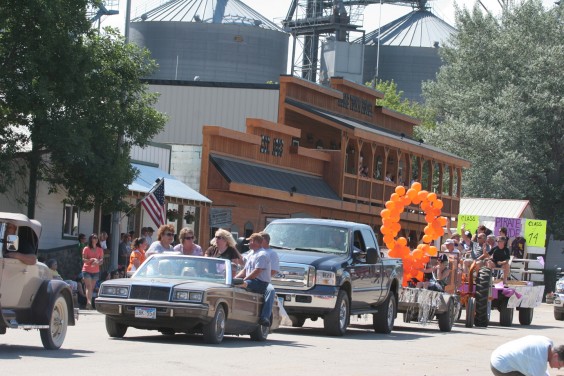 A year later, a rustic, Old West charm welcomes visitors on the block where the fire raged. Someone driving into town might get a wave from a guest sitting in a rocking chair on the high porch of the Home Town Hotel. The cement sidewalk all along the street has been made to look like an old-timey wooden boardwalk. By September, enticing aromas from The Rusty Nail Steakhouse will be part of the Old West allure. Two new businesses—a new home for Syring & Associates, and a new grain marketing business—are being constructed.

And even community projects that were in the works before the fire have benefited from the new energy in the town: Community-owned Lake Grocery has a new freezer and, for the first time, air conditioning, thanks to a local fundraising campaign. It will also get a new storefront to match the Old West appeal of the street.

“We are in the midst of quite a revitalization here on Main Street Willow Lake,” said Kristin Brekke Vandersnick, president of Willow Lake Area Advancement.

One of Willow Lake’s residents heard a noise in the early hours of July 12, a thunk that turned out to be the awning falling off a burning building on Garfield Street. The call to 911 came in about 1:30 a.m., according to Willow Lake Fire Chief Shane Ladwig, who was quoted in a KELOLand.com story soon after the fire.

“I only live a block down the street, and I left the garage and all I could see was orange, so I immediately notified our surrounding departments and we had them en route,” Ladwig said. 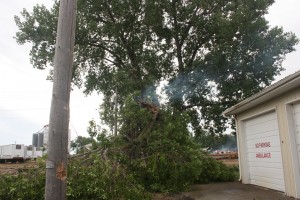 Smoke still wafted from the tree that started the Willow Lake fire on July 12, 2011. Photo by Clark County Courier

The South Dakota Fire Marshal’s Office later determined the cause of the fire: A controlled burn of an old elevator building on July 10 had ignited a tree, which local firefighters extinguished. At some point that tree reignited; as it slowly burned, a branch fell onto a power line, which started a short that sparked the fire in the Willow Lake Locker.

That night, the immediate concern was keeping the fire from spreading down the block. Firefighting became a community effort: The Wheat Growers facility supplied their fire trucks to help the volunteer fire department, which also refilled its trucks at a local farmer’s irrigation facility. People who showed up to watch the fire jumped into action to empty the office of Tellinghuisen Construction, saving his computer equipment and documents.

“In a small town like this, everybody is willing to help out,” Ladwig said.

Ladwig added that the fire could have been worse: If the call had come in even half an hour later, they would likely have lost more businesses, including Lake Grocery. 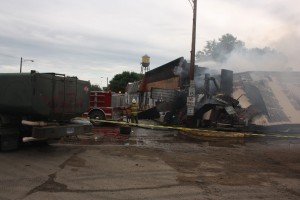 There was plenty enough damage as it was. Wayne Tellinghuisen owned the building that housed his construction business, as well offices that housed the hair salon and accounting office. He lost an estimated $500,000 worth of construction equipment when his storage building burned. “I have never dealt with a fire before,” Tellinghuisen said in the days after the fire. “We are just trying to get things squared around so we can get this building up and running and then we will start dealing with everything else.”

There wasn’t a whole lot of time for contemplation—not if the town wanted to be ready for its annual July 4 celebration. Willow Lake has the longest-running all-school alumni reunion in South Dakota; 2012 marked its 100th year, and a big crowd was expected. How could they get their downtown in shape for all those returning alumni? 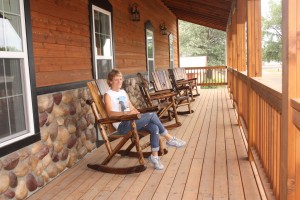 Sherrie Tellinghuisen sits in one of the rockers on the porch of the Home Town Hotel in Willow Lake. Photo by Clark County Courier

Pretty soon, several Willow Lake residents started thinking big. One of them was Tellinghuisen, who bought the whole lot where the fire had been and changed his company from Tellinghuisen Construction to Tellinghuisen Inc., a business that now includes the eight-room Home Town Hotel, storage units and office space. 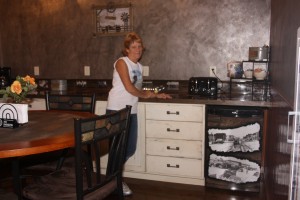 Sherrie Tellinghuisen in a kitchen area in the Home Town Hotel in Willow Lake. Photo by Clark County Courier

The hotel, managed by Tellinghuisen and his wife, Sherrie, features many special touches. Historical photos of Willow Lake and surrounding communities, which were donated by the local museum and residents, decorate the vanities, coat racks, counters and refrigerators; returning alumni might spot a relative or two. The phones in all the rooms are new, yet look old, with the receiver hanging on a hook on the tall, black base. The floors are cement, but it would be difficult to tell that if you didn’t know—stain and paint techniques on the floors and the walls complement the wood used elsewhere.

The business caters to hunters, with a bird-cleaning room, individual freezer compartments for the rooms, and 10 dog kennels. The storage units could hold anything from a motorcycle to a large camper, if needed.

According to a story in the Huron Plainsman, Tellinghuisen said the project will cost about $1 million in all, part of which was paid for with insurance money. He sees the share that came from his own pocket as an investment in his community.

“Hopefully people will start to build more and bring their families here to stay,” he said. “It’s a wonderful community to live in.”

Sherrie Tellinghuisen is looking forward to their new venture.

“It will be interesting,” she said. “We’ll get to meet a lot of people from different parts of the country. That will be fun. We have several weekends booked so far for weddings. … It will be nice to have for our small town.”

Many of the visitors to the Home Town Hotel thought it was more than just nice.

“This is a beautiful, beautiful place,” June (Edleman) Newberg, of New Ulm, Minn., was quoted as saying in the Huron Plainsman story. She was one of the first to stay at the hotel. “It is so good to have a hotel in Willow Lake.”

Wayne Tellinghuisen said many people who have toured the facility voiced their appreciation to him with tears in their eyes.

The Rusty Nail and Lake Grocery 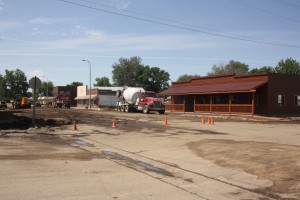 Work on The Rusty Nail was under way in late June, just before the Willow Lake celebration in early July. Photo by Clark County Courier

Willow Lake’s only restaurant closed in 2011—but residents of Willow Lake would not give up on having a place to gather for a meal so easily. Area residents pooled their money to finance a new steakhouse on Garfield Street, which will also have an Old West flavor. Construction started in May for an expected opening in September.

Supporting this effort was Willow Lake Area Advancement, which brings some needed volunteer manpower and organizational support to the projects that Willow Lake wants and needs to tackle.

Making sure the town has a grocery store is one such project. The town’s only grocery store closed in 2008, which left residents without a convenient place to get groceries for about a year. “We are 45 miles from Huron or Watertown, and we are in between De Smet and Clark,” said WLAA president Vandersnick, as quoted in the Huron Plainsman article.

The community group was given the store building by Dacotah Bank in 2009, and made a variety of needed improvements before setting up shop again. The store, which is run by a manager and two employees, is doing so well now that it has been able to pay rent on the building. WLAA has put that money in its business development fund—so the success of one business is supporting the success of others.

The Willow Lake All-School Reunion is such a popular event that not even spouses are allowed into the banquet—there’s not enough room for them. At this year’s event July 4-8, the 100th year of the celebration, more than 500 alumni attended.

Even more people attended the other activities during the event, including the parade down Garfield Street. No evidence of the 2011 fire was in sight as colorful floats showing Willow Lake pride made their way down the street. The creative displays honoring many graduating classes celebrated happy times in Willow Lake’s past.

But as the year since the fire shows, with its strong community support, Willow Lake’s future is looking pretty bright, too.