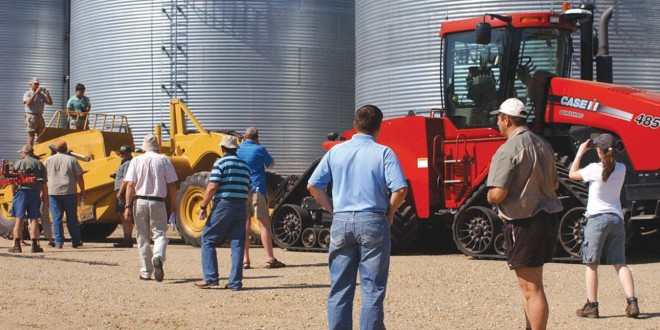 By Webster Reporter and Farmer August 6, 2012

Members of a South African farm group toured eastern South Dakota last week to learn the cultivation practices of no-till and zone tillage farms and connect with some American farmers who toured some of the South Africans’ operations in 2010.

The tour, put together by Ag Tours U.S., went to farms and businesses in five states over a 10-day jaunt that took place July 27-Aug. 5. The group visited the Matt Johnson farm near Webster on July 30.

The South Africans were particularly focused on the technical end of farming. They wanted to know how their U.S. counterparts fertilized and lot sprayed, and what brands of seeds they used.

“We had a great tour,” Matt Johnson said. “It’s always interesting to talk to farmers from other countries to find out what their challenges and interests are. We learned about how they farm and what the differences are. They were very interested in agronomy and fertilizers. I’m glad I brought in our agronomist because they (South Africans) are very smart people.”

Pieter V/D Walt is a corn and soybean farmer for Middlesburg, South Africa. He was very impressed by the American use of farm technology and the size of the equipment. Walt said he began farming in 1992 with 150 hectares of land and today farms about 1,000 hectares.

Walt said American and South African farmers share some common problems. Land prices keep escalating and the trend is toward bigger and bigger farms. He noted South African climate isn’t a lot different from here, but said the soils there don’t hold the moisture like our soils do. He also said many South African farmers raise livestock, particularly cattle, which are turned back into their harvested crop acres.

Walt said South African producers probably aren’t as modernized as their U.S. counterparts, but his nation has made great strides in the last couple of decades.

Other South Dakota stops on the tour included farms in Elkton and Bruce, a discussion with the director of the South Dakota Soybean Association, dinner with South Dakota Ag and Rural Leadership alumni in Brookings, and a tour of the POET Biorefining Headquarters in Sioux Falls. They also made stops in Minnesota, Nebraska, Iowa and Illinois.